Today’s premium cars are all about more. More luxury, more technology, and more safety. So if you’re Mercedes-benz, already renowned for giving buyers more of everything, what do you add to your biggest, best models to make them even more attractive? Well, how about more motor? And to be honest, we can’t think of anything else that can be added to make this 2001 Mercedes-Benz CL600 coupe, and this 2001 S600 sedan, more car. These two flagship designs are already so well equipped about the only thing they don’t have is a computer system that allows you to program your destination and then just jump in the back for a nap! But then that would defeat a big purpose of these automobiles. For in spite of all their high tech gizmos and gadgets, they are still machines built for driving by real drivers. And as real drivers, we’ll accept more motor and all the attendant benefits that come with it any day of the week. What more motor is in this pair of Benzes is an all-aluminum 5.8 liter, SOHC, 36 valve, V-12. This big 12 generates 362 horsepower and 391 pound-feet of torque. The V-12 includes Active Cylinder Control for up to 20% better fuel economy at cruise. Active Cylinder Control deactivates the valves and fuel injectors in the left bank of cylinders when maximum power isn’t needed. But does it work? Well, on a 700 mile trip down the East Coast, one of our heavy-footed staffers averaged 20 MPG on the highway. In suburban and city driving we still managed 16 MPG. That’s right in line with EPA estimates of 15 city/23 highway and about what most V-8 competitors manage with a tail wind. 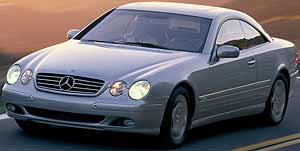 The performance numbers are equally impressive. Due to weather, only the CL600 made it to the track. But, it’s lighter than the S600 by just 176 pounds, so the pace of both should be close. Indeed, the CL600’s numbers read like those of a car weighing a lot less than 4,300 pounds. 0 to 60 is just 5.9 seconds, and the standing quarter mile at 14.2 seconds at 101 MPH. Our drivers commented that the power band is so broad and delivery so smooth it’s hard to get a true sense of velocity. They also noted that shifts from the 5-speed adaptive transmission were a little crisper and quicker when the trans was left in drive, as opposed to using the Touch Shift manual control. But Touch Shift did come in handy when working the CL through the low speed slalom exercise. As it holds the car in the desired gear nicely, as long as you don’t get too near the redline. Then it shifts up on its own. Both the CL and the S class are equipped with Mercedes’ Active Body Control, a system of electronic sensors, controls, and shock-mounted high-speed servos that virtually eliminate dive, squat, and body roll. As expected, handling response is impressively flat. More useful in real world conditions is a dash-mounted switch that lets you cruise in ABC’s normal mode, or firm up the suspension for a more sporting ride. The technical fusillade continues with the availability of Distronic adaptive cruise control on both models. Distronic uses radar technology to allow drivers to select a predetermined distance from the car in front of them. By automatically using the throttle and brakes, Distronic maintains that distance until the driver selects a new distance by way of a console-mounted thumbwheel, or deactivates the system by a switch or hitting the brakes, just like a conventional cruise control.

And speaking of brakes, the CL and S class have great ones. 13.1 inch vented and cross- drilled rotors up front, 11.8 inch vented solids at the rear. With ABS and Brake Assist we brought the CL down from 60 in 112 feet. Our drivers loved the car’s stability and the firm pedal feel. We also love the feel of the 14-way adjustable and ventilated leather seats that come with both heating and cooling features. The thick leather-wrapped, tilt-telescoping steering wheel feels pretty good in your hands too. But after all the Mercedes’ that we’ve tested, we still find the Command system, that integrates controls for the navigation system, the Bose premium audio system, and on-board telephone, to be confusing and not very intuitive. Thank God the dual-zone climate controls have an auto setting that allows you to set it and forget it. Of course the obvious difference in the CL and S class when it comes to room and accessibility are the number of doors and the amount of room in the back seat. The S has a definite edge. But the price difference between the two is fairly small. Base price on the 2001 CL600 is $117,845. While the S600 starts at $114,645. V-12 power and cutting edge technology doesn’t come cheap. But who are we to say that it’s not worth it? With all their high tech advancements and lovely interior appointments, you can seriously argue that these are two of the finest cars on the road. And should our dot com stocks stop sucking wind and return to the heady heights of yesteryear, don’t be surprised to find one, or both, in our driveway.