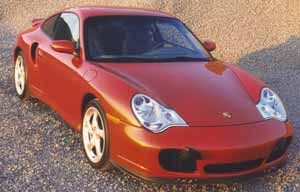 Listen to Porsche fans discuss their favorite models, and you’ll frequently hear them refer to one in particular as simply, “The Turbo”. That exceptional car, for those not quite in the know, is the Porsche 911 Turbo. Machines that have raised driver’s adrenaline levels, inspired envy among pedestrians, and terrified minivan drivers for 25 years. And now Stutgart has delivered what it calls “the ultimate production Porsche,” the 2001 911 Turbo. And as we found out, the legend continues to grow.

With good reason, because the totally new, 5th generation, 2001 Porsche 911 Turbo is the most sophisticated, most performance-intensive Porsche yet unleashed on the American market.

Loosely based on the 911 Carrera-4, the new Turbo’s all-wheel-drive system is completely changed from the previous Turbo. The viscous clutch has been moved from the rear transaxle and integrated into the front differential. This shifts more weight forward, plus allows Porsche to finally offer the Turbo with the optional Tiptronic S automatic transmission. Though we naturally prefer the sharp, standard, 6- speed manual.

All-wheel drive power to the front axle varies from 5% to 40% depending on grip. And grip is further enhanced by Porsche’s Stability Management System, which measures a wide variety of inputs and the yaw rate, and then momentarily applies the anti-lock brakes to one or more wheels for cornering course correction and balance. Add in traction control, Porsche’s E-Gas electronic throttle, and a set of 18-inch alloy wheels wearing huge 295/30ZR18 tires, and you have one trick platform.

And this is before you lift the lid on the engine bay, which is packed tight with a 3.6-liter, dual-cam, 24-valve, twin-turbo, water-cooled flat-six that’s derived from the Lemans-winning GT1 race car. Using Porsche’s improved VarioCam-Plus valve timing system, it blurts out 415 horsepower and a bone-crushing 415 pound-feet of torque. All of which is available in a steeper and broader power curve, from 2,700 to 4,600 rpm!

With so much engine and traction-technology, a 0-to-60 time of 4.1-seconds comes as no surprise. Nor does the 1/4 mile at 12.6 seconds and 112 miles-per-hour. Top speed is 189 miles per hour. At launch, the smooth bottom end feel from the effective all-wheel drive power distribution is deceptive. But, the engine’s massive midrange punch leaves no doubt that this is a supercar even among 911 Turbos.

Laps of West Virginia’s Summit Point Raceway were further reinforcement. The levels of power and grip available in the Turbo are astounding! No matter how hard you push and pull it, the Turbo all but refuses to fly off the tarmac. Notable understeer on high speed turn-ins remains part of the Turbo’s character, but it is tempered now, and mostly invisible at street speeds with near telepathic steering. Also, with the all-wheel-drive and PSM systems working in concert with a MacPherson strut front and 5-link rear suspension, derived from the 911 GT3 race car, the once terrifying 911 Turbo oversteer has been all but eliminated. And even with PSM turned off, you have to be almost reckless with the throttle to break the rear end loose. It’s really amazing!

But even the grip pales next to the Turbo’s incredible on-track acceleration. Coming out of slow corners, the car seems to jump to warp speed, pinning you back into the seat, and continues to pull like a rabid freight train all the way to the next corner. Where the massive ABS-equipped 13-inch disc brakes with fixed monobloc 4-piston calipers yank the car down from speed so hard that our test drivers started to feel the effect of heavy G-loads after only a few laps. And that is without Porsche’s high heat and fade resistant ceramic disc brake system that will be available for the Turbo later this year.

Yet all that performance is contained in a package that is amazingly docile when driven on the street. The clutch is smooth and the shifter light to reduce fatigue in heavy traffic. The 18- inch rims do transmit most jolts directly to your seat, but it never upsets this supercar or our stomachs.

A supercar, we might add, with styling that is as functional as it is handsome. But we must also say, with more complex curves and fewer angles and appendages, it makes a tamer statement than older 911 Turbos. Compared to the 911 C4, there is a new front fascia, bi-xenon headlamps, and huge air intakes that feed the Turbo’s three radiators. While the rear, which is almost 3-inches wider than that of the previous Turbo, wears a retracting spoiler. While no whale-tail, it automatically extends at speeds above 75 miles-per- hour.

The inside is little changed from other 911s. Which is not a bad thing, since the 911 cockpit is smart, efficient, and reasonably roomy. And covered with leather, from the door panels to the supportive power-operated bucket seats. The combination of folding rear seats, and up-front trunk well, provides more than enough luggage space for a weekend getaway.

But now to the number that separates this dream from most of our realities, the price! Base sticker-shock for the 2001 911 Turbo is $111,000. With its few options, our test car hits the road for $114,700. Actually, if you can find any other car in the same league with the 911 Turbo for less moo-la, buy it. We know you’ll be walking home.

Indeed, for twenty five years and through five generations, the Porsche 911 Turbo remains one of the most unmatchable of supercars for any price. This is one long running legend fueled on fact, not folklore. And it’s more engaging with each rapid generation.