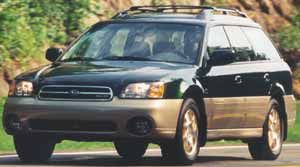 One might argue that it was Subaru, with its all-weather, all-wheel drive wagons that fueled the current explosion of car-based sport-utility vehicles. But, as is often the case with a trendsetter, tiny Subaru has struggled to keep up with their larger competitors, who can out spend, out market, and out power them. But now, Subaru is doing what any other plucky little company would do, fighting back. Indeed, the latest Outback wagon is loaded for bear.

Actually, it’s loaded with a whole lot more engine. More specifically, Subaru’s first six- cylinder engine since the out-of-character SVX sports-coupe disappeared 4 years ago. But this one is all-new, and will initially be offered in only two upscale models, the flagship Outback H6-3.0 VDC, and the Outback H6-3.0 L.L. Bean Edition. 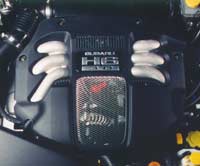 Fitting the six, which uses the same horizontally-opposed layout as Subaru’s 4-bangers, into the Outback’s engine bay actually proved to be a simple process. The new 3.0-liter boxer engine is less than an inch longer than the standard 2.5-liter 4-cylinder, yet produces 28% more power. The robust ratings are 212 horsepower and 210 pound-feet of torque, thanks to variable- stage intake and exhaust systems, dual-overhead cams, and 4-valves-per-cylinder.

Connected to it is a 4-speed automatic transmission, with a lock-up torque converter. And beyond that, on the VDC, to Subaru’s newest Variable Torque Distribution full-time all- wheel-drive system. It uses a multi-plate transfer clutch, and planetary gear type center differential, plus traction control, to make sure torque goes to the wheels that need it quick.

But the VDC in this Outback’s name is more than just a trio of letters. It stands for Vehicle Dynamic Control, Subaru’s first electronic stability system. VDC’s yaw and steering sensors work with the all-wheel drive system, traction control, and ABS brakes, to help correct over and understeer.

In track testing, the H6 engine and high tech drive and handling hardware all work in an impressively cohesive manner. 0 to 60 passes in 8.3-seconds, and the 1/4 mile in 16.3-seconds at 86 miles-per-hour. That’s not only almost a second faster than the Outback-4, but with gobs more pull from 3,600 to 6,200 rpm. Transmission gearing also seems to be spot on.

But, as our friends at AMI Auto World Weekly noted, more oomph is not the powertrain’s only plus: “As welcome as the extra power is, the primary benefit of the new engine is smoothness”.

As for mileage numbers, the 6-cylinder Outback is EPA rated at 20 city/27 highway. We averaged 22 miles-per-gallon on our mixed test loop. Just one MPG less than the last 4-cylinder Outback we tested!

When testing the VDC system, we initially felt little difference in our slalom test. Except that the power steering delivered less feedback than our 4-cylinder long term test car. And the new engine’s extra weight seemed to induce a bit more front end plow in mid-corner. But pushed a lot harder, and the VDC system kicked in to smoothly and unobtrusively pull the car back into the desired line.

At least that buys you most of the Limited’s luxurious interior trappings. Plus special leather upholstery, McIntosh audio system, and automatic climate control. Still, we hope Subaru will make the impressive 6-cylinder engine available in more reasonably priced models soon, and allow Subaru drivers and their cars to shoot it out with the big boys, without having to go for broke.