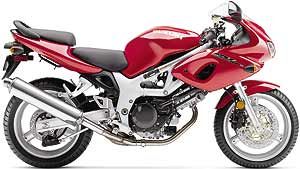 Anyone who says that the best things in life are free, never had to pay for a high performance automobile. And the same applies to motorcycles. Today’s lightning quick, slick handling sport bikes are anything but cheap. So what do you do if you want real sport riding fun on a budget? Well, Suzuki would like you visit one of their dealers, and check out this SV650S. Let’s see how much two-wheeling bang for the buck they can deliver. Well, in marketing the 2001 Suzuki SV650S, they certainly got the bucks part right. MSRP is a very reasonable $6,199. That’s close to $2,000 less than you’ll pay for one of today’s top-drawer 600cc sport bikes. But, thankfully, a low price doesn’t mean cheap. The SV is built on a very trick-looking, oval-tube, trellis-style aluminum frame. Much like those used in some very expensive custom race bikes and features a lightweight, square- section aluminum swingarm. Suzuki did save a little money with a less exotic suspension. Non-adjustable 41mm forks up front and a single rear shock, that’s adjustable for spring pre-load only. But they ride on 17-inch cast aluminum wheels shod with Metzler’s premium ZR-rated MEZ4 tires. The wheels are slowed by, not one, but two 290mm discs with twin piston calipers up front and a single 240mm disc in the rear. Powering it all is a potent little 645cc 90-degree V-twin, with dual-overhead-cams and 4- valve cylinder heads, which feeds power through a light, crisp 6-speed gearbox and dumps spent fuel through a stainless steel 2-into-1 exhaust system. The whole package is topped off with a sleek half fairing with stylish cat’s-eye headlights, in which is nestled a carbon-look instrument cluster with black and white analog gauges and large, usable mirrors. It’s quite an impressive package on paper. But as always, the proof is in the riding. And riding the SV650S shows it to be one very capable machine regardless of price. With a dry weight of only 372 pounds, and a short 55.7-inch wheelbase, the SV turns on a dime, and changes direction with very little effort. But it never feels loose or intimidating. Its stability will reassure even the most nervous novice. While its instant response to rider input, and the suspension’s ability to soak up mid corner bumps, will please experienced sport bike fans too. 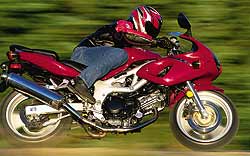 The nippy little V-twin engine revs freely, but doesn’t really have good punch until 4,000 rpm. But, once past 6,000, pulls hard to the 10,500 rpm redline. As V-twins go, it’s more Ducati than Harley Davidson. But on the road it was the brakes that impressed us most. They stop the lightweight SV like a real superbike, with plenty of power and feel. Be forewarned, however, that once the pace drops to around-town speeds, the low clip-on bars throw all the rider’s weight onto the hands and wrists. That makes for very sore hands and wrists if you’re a 6-foot or taller rider. Though the well padded seat and properly positioned footpegs offer all-day comfort, while the fairing provides moderate weather protection, and clean airflow for long highway hauls. It’s a bargain bike that doesn’t look or perform like a bargain bike. In fact, it’s as capable on a twisty road as machines costing thousands more. And if that’s not enough to temp you, Suzuki also offers a standard model SV650, with taller handlebars, lower footpegs, and no plastic. It costs even less, a mere $5,799. So if someone asks you how much two-wheeling bang for the buck you can really get these days, point them at the nearest Suzuki dealer. Once they throw a leg over the 2001 Suzuki SV650S, we’re sure that they’ll agree the answer is a very big bang indeed!