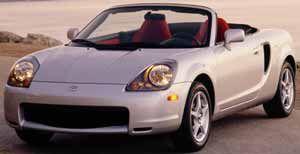 Unless you’ve been living under a rock the past couple of years, it’s no news that SUVs are practically ruling the roads. But with summer driving just around the corner, you may start to notice the emergence of a new, smaller road ruler. It’s the roadster, and buyers wanting to join the coup d’tat will find a surprising number of attractive choices. The latest offering from this convertible cornucopia being the 2001 Toyota MR2 Spyder. Now, Toyota’s two-seater has been completely rethought, and it looks like the new Spyder’s timing is perfect. But, is it a perfect roadster pick?

It certainly could be, if you’re the sort of person that wants driving to be pure fun. Because this 2001 Toyota MR2 Spyder was conceived purely with youthful fun in mind. Designed from the ground up to appeal to younger buyers, the 2001 MR2 maintains the 2-seat, mid-engine, rear-drive layout of its predecessors. But opts to go the ragtop route this time around.

The MR2’s look is almost unbearably cute, but auto trivia buffs will note that it bears a strong resemblance to the English-built Midas Gold Cabriolet of the 1980s, not to mention a variety of auto show concept cars since, and sits on a comparably short wheelbase of 96.5-inches. Overall length is only 153-inches.

This tiny, 2,200-pound package is propelled by the same 1.8-liter, twin cam, 16-valve 4- cylinder engine with variable valve timing, found in the Celica GT. In the MR2, it sits above the rear axle and makes a slightly reduced 138 horsepower and the same 125 pound-feet of torque. Which is then fed through a firm-but-accurate 5-speed manual shifter. No automatic is available. No kidding!

With a true sports car manual shifter in hand, we launched the MR2 to 60 in a spirited 7.1 seconds, and through the 1/4 mile in 15.3-seconds at a respectable 90 miles-per-hour. But we felt a rather tall 4th gear slowed our 1/4 mile runs. Still, it’s a lot more exciting off the line than its main soft-top rival, the Mazda Miata.

Though the MR2 Spyder is not quite the Mazda’s equal when it comes to balanced handling. The powertrain’s rearward weight bias does allow the car to unhook when pushed hard. But the quick, crisp electric-hydraulic power steering allows you to easily bring it back into line, so the fun quotient is high.

That goes for braking too, where the lightweight MR2 is clearly superior to the Miata, stopping from 60 in an amazingly short average of 94-feet. The ABS-equipped discs bit hard, while the chassis remained straight as an arrow. Pedal feel was also first rate. When we took to regular roads, we discovered a fair bit of body flex. But we also prefer the slightly taut ride to its softer roadster rivals.

Top-up design is par for the mini-roadster class, with large blind spots, but including a heated rear glass window as standard equipment. The top down design, however, goes the competition one better. Just flip two latches on the windshield frame, and the lightweight top folds quickly. But then it latches easily in place, thus eliminating the need for a hard-to-fit tonneau cover. Very clever. A small, flip-up wind deflector helps reduce buffeting in the cockpit.

Dropping the top opens up an interior that is surprisingly wide and well-equipped for such a small two-seater. Most interior dimensions, including hip and shoulder room, are superior to Miata and as good as some small sedans.

The bucket seats are a bit on the firm side, but offer adequate back support, while the large, but not quite comprehensive, white-face gauges make for easy high speed reading. Heat and ventilation controls are clear and easy to reach. But the standard CD-and cassette-equipped stereo is set too low for easy operation, negating its well-designed controls.

But where the MR2 really comes up short on perfection is in luggage space. There is a tiny 1.9-cubic-feet in a small compartment behind the seats, plus space for a very small soft bag in the front spare tire well. It’s too tight even for a weekend getaway. Though, once behind the wheel, the lack of luggage space seems a small price to pay for so much driving fun.

In real money that fun goes for a list price of only $23,098, with no significant options. Dealer extras include an interior tonneau cover, front-end mask, and wheel locks. With only 5,000 Spyders this year, expect demand, and dealer markups, to be high.