As gas prices go up, so does the interest in fuel efficient automobiles. Now I’m not saying that the day of the big SUV is over, far from it. But a growing chorus of American drivers are looking at today’s fuel and environmental concerns, and deciding that the time to conserve is now. Well, one harmonious way to conserve is by driving a gasoline/electric hybrid like the Toyota Prius sedan. But can one little car really make such a big difference?

Well, that depends on how and where you drive the 2001 Toyota Prius. Like gasoline-powered automobiles, different hybrid vehicles have different designs, and different results.

The Honda Insight for instance, uses electric power to assist the full-time gasoline engine, and is not designed to run on electric power alone. The Insight is thus more efficient at stable highway speeds.

The Toyota Prius however, which is designed to be most efficient in crowded urban traffic, uses either electric power, gasoline power, or a combination of the two, as needed. 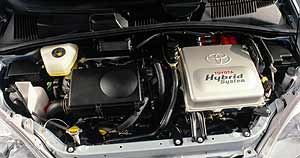 Its drivetrain, dubbed the Toyota Hybrid System, consists of a 1.5-liter, dual- overhead-cam, four cylinder engine. In the American market it delivers 70 horsepower and 82 pound-feet of torque. This lightweight all-aluminum 4-banger is equipped with variable-valve timing, and a vapor-reducing fuel tank to improve efficiency and reduce emissions.

The other half of the drivetrain in our Prius begins with a new battery pack. It’s 20-percent lighter, and 40-percent smaller than the Japanese-market Prius we first tested. Peak power output of 25-kilowatts. Which is used to drive a permanent- magnet electric motor, which adds another 44 horsepower to the equation. But, that pales in comparison to the astounding 258 pound-feet delivered from 0 to 400 rpm. Motive power, whether gas or electric, is fed to the front wheels through a continuously-variable planetary-gear automatic transmission.

The point of the Prius is as we said before, high fuel economy in urban driving. As a result, the EPA fuel economy ratings are 52 city/45 highway. Our usual test loop, which mixes city and highway driving, yielded a steady 40 miles-per-gallon. Yes, a diesel Golf is comparable, but that’s not the point either. Progress is.

Driving progress in the Prius can be an unusual experience, as the Toyota Hybrid system shifts seamlessly between gas and almost silent electric power. Gas power is used until the batteries are fully charged. The system then shifts to electric power, until battery levels drop and the gas engine kicks back in. Pull to a stop, and the gas engine shuts down to save fuel. The car then pulls away in electric mode, switching the gas engine back on when more power is needed.

Even stopping the Prius helps save fuel. The ABS-equipped front disc/rear drum brakes feature a regenerative charging system that makes power for the batteries every time that you touch the brakes. Braking power however, could be better, with stops from 60 averaging a longish 132 feet.

Handling is pretty much what you expect from a compact Toyota sedan. There’s not a lot of sporty feel, but grip is good, and we sailed through without difficulty.

Inside, the Prius offers a big 88.6 cubic-feet of passenger space. The layout is slick, with the digital gauges and prominent charging system/stereo display located high in the center dash. Seating is a pair of supportive buckets up front and a rear bench with plenty of head room, but a need for a few more inches of leg room. While trunk room is a good 11.8 cubic feet.

The price is also reasonable. $20,475 will put you in the most advanced gas- sipping car yet. But be prepared to wait for it, since Toyota dealers report a substantial backlog of orders. With only about 12,000 cars being imported this year, no one expects the Toyota Prius to save the planet.

But if you’re an American driver who’s guilty conscience says the time to conserve fossil fuels is now, the Prius will certainly make your feel better. More importantly, the Prius, along with the Honda Insight prove that hybrids are viable, now. So much so that hybrid SUVs are just around the corner. So while Prius isn’t perfect, its a perfectly acceptable first step towards making other motorists green with envy.