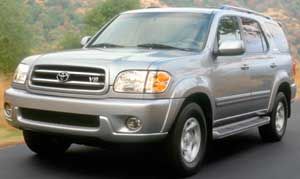 Nothing reflects the economic theory of supply and demand like the sport-utility market. Even in a time of rising fuel prices, buyers are demanding more and bigger sport-utes. And manufacturers are rushing to supply them. The latest company to dive into the full-size-ute pool is Toyota. Their new Tundra-based Sequoia takes on market leaders Ford Expedition and Chevrolet Tahoe. So, are American highways about to get tighter? Indeed the new 2001 Toyota Sequoia is no sapling SUV. In fact, like its namesake, it’s one of the biggest. The Indiana-built Sequoia measures 203.9-inches from bumper to bumper. And rides on a wheelbase of 118.1-inches. That’s bigger than the Chevrolet Tahoe, and only a hair smaller than the Ford Expedition. In fact, only the Chevy Suburban/GMC Yukon XL, and Ford Excursion are significantly larger. Based on the Tundra pickup, the Sequoia is powered by Toyota’s I-Force 4.7-liter twin- cam, 32-valve V8. Output is robust at 240 horsepower, and 315 pound-feet of torque. And the Sequoia is EPA-certified as a ULEV, or ultra-low-emissions vehicle. The rest of the drivetrain consists of a 4-speed automatic transmission, and on 4X4s, a full-time shift-on-the-fly system with a locking center differential. And while a minority of Sequoias will see serious off-road use, they can with ground clearance that tops out at 10.6-inches, 3 inches more than Expedition. We put the Sequoia to our initial tests, both on and off-road under the Big Sky of Montana. On pavement, the double-wishbone front and 5-link rear suspension delivered a solid, yet very comfortable, and very quiet ride. In corners the Sequoia feels stable, but very big. Handling is tight for a full-size SUV, but tire squeal comes quickly in corners, even at low speeds. To keep the Sequoia pointed in the right direction at all speeds, traction control, and Toyota’s electronic Vehicle Skid Control system, which helps correct for understeer and oversteer, are standard fitment. The I-Force engine is smooth, and delivered gobs of low-down power. But while the transmission’s gear ratios were well chosen for a wide variety of driving conditions, shifts surprised us as being a little on the rough side. Sequoia styling, however, is anything but. In fact, while in the Tundra clan, styling is so smooth as to be almost generic. Especially up front, where bumper, grille and headlights flow together into a solid, tall, almost-monochromatic wall. While out back, the huge taillights, prominent bumper and flat rear hatch enforce a look of real mass. All riding on 16-by-7-inch wheels, wearing 245/70 tires on 2-wheel-drive models, and 265/70s on 4x4s. 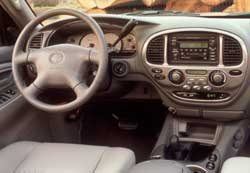 Inside, the big Sequoia, like its big competitors, seats up to eight people in three rows of seats. Safety features include optional side impact airbags, and side curtain airbags for the front seats. The dash, a stylized version of the Tundra’s, is artful and rounded, more car-like than truck, and faces seats with optional 8-way power adjustments for the driver and passenger, leather and seat heaters, and places the driver squarely in front of a large, comprehensive gauge cluster. And within easy reach of a high-mounted stereo with cassette and CD players in the SR5, while Limited trim adds a JBL system with indash 6 CD-changer. On all models, easy to use Automatic Climate controls sit directly below. Second-row seating is split 60/40. The seatbacks recline, and the whole seat can be tumbled forward. That makes it easy to reach the 50/50-split third row seats. They slide forward-and-back, and can be removed for more cargo space. Space that, when accessed through the large hatch with power window, totals 128.1 cubic-feet with the third row out and second row seats folded. And, how much for the kind of size, power, and space SUV buyers demand?

So, with its full-size Tundra heritage, advanced comfort and safety features, three rows of seating, and Toyota’s reputation for quality, we think it’s a good bet that demand for the 2001 Sequoia will also outstrip supply. So watch your bumpers and mirrors, America. Your highways and parking lots are about to tighten up a little more with big Sequoias.