The luxury car market is a pretty tough place to be in this 21st century, but BMW is thriving in the current ultra-competitive environment. And the Bavarian automaker is now set to release a host of new products, aimed at consolidating its hard-won position as one of the world’s top premium car builders. Now the first of these important new models is this 2002 7-Series sedan. It’s not just all-new from the inside out, but very different from its predecessors and its competitors. But since the 7-Series buyer ranks among the most conservative of BMW owners, is this new flagship too over the top?

Some folks certainly think so! Since its introduction, the 2002 BMW 7-Series has received an unusual amount of criticism not for its luxury or performance, but for its styling. Or, more accurately, part of its styling. There have been few complaints about the blunt front end, which still features the familiar kidney-shaped dual grille and new quad Bi-Xenon headlights, with turn signals now set above them. But the rear end has had style gurus from London to Milan spitting venom at BMW designers. More specifically, it’s the tall, flat trunk lid with its very sharp character line that doesn’t seem to fit the fenders around it.

BMW defends the design as not only more daring, but substantially more aerodynamic and space efficient. Indeed, if cargo space is your priority, then the new car’s huge 18-cubic-foot trunk with new power-assisted lid lifts will make you overlook the look.

The taller trunk is part of an effort, along with a more exaggerated aluminum hood, larger, more sweeping greenhouse, and standard 18-inch wheels with 245/50 tires, 19-inch wheels are optional, to give the new 7-Series a more dynamic, in-your-face presence. But there’s so much more to the new 7-Series than just styling. The all-new platform is both stronger and stiffer than before, and rides on a longer 117.7-inch wheelbase.

Power comes from a greatly revised 4.4-liter dual-overhead-cam V8, that now includes VANOS variable-valve-timing, and Valvetronic variable-valve-lift. That’s in addition to electronically controlled throttles, and a variable intake manifold. The result is 325 horsepower, and 330 pound-feet of torque. And if you want even more, the 2003 model year will see the introduction of an all new 6.0-liter V-12 engine in the 760Li.

The new V8 is coupled with an ultra-slick 6-speed automatic transmission. It includes Standby Control that partially disengages one of the internal clutches to reduce fuel consumption. The gear shift is now a very unBMW-like stalk to the right of the wheel, with wheel buttons for manual gear changes. All together the drivetrain lifts over two tons of 745i to 60 mph in 6.2 seconds. And through the 1/4 mile in 14.7 seconds at 98 mph. Off-idle throttle response is very abrupt, but once past that, the 745i rockets down the track in an exceptionally smooth and seamless rush of power.

Now, getting so much car through the corners is the responsibility of a new all-aluminum suspension. The front consists of struts with double-pivot lower arms. The rear is a 4-link design with twin-tube gas shocks. Self-leveling rear air suspension is optional Pitch the big Seven into a corner, and there’s much less front plow than you would expect, as it tracks beautifully. Dynamic Stability Control keeps curves well in check. There is much less body roll as well, thanks to BMW’s new Active Roll Stabilization system. It’s remarkably tight and responsive But switch the DSC off, and we found the new 7-Series to have a tendency to oversteer near the limits. Even with traction control, the abrupt throttle response delivers a sharp power spike that can easily break the rear tires loose. In this mode a delicate touch is required when pushing hard out of tight corners. Through it all, the new variable-ratio rack-and-pinion steering delivers an excellent balance of smoothness and feedback.

With new Electronic Damper Control, the 745i delivers one of the most quiet, refined highway rides that we’ve ever experienced. The whole car feels exceptionally solid, like it was carved from billet steel. 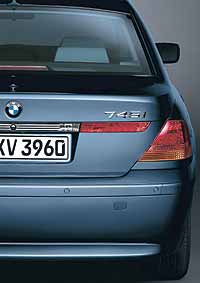 The vented brakes also feel like solid steel, huge 13.6-inch discs up front and 13.7-inch in the rear. They’re clamped by lightweight aluminum calipers, and linked to standard ABS and electronic brake proportioning. They delivered stops from 60 that averaged 118 feet. The brakes grab hard, but there’s little nose dive and no lateral instability. A novel new braking feature is the adaptive brake lights, which signal intense braking effort by activating additional rear lights.

Stepping away from the mechanical and into the spacious cabin, the 745i displays an impressive, and some might say excessive, level of sophistication. Safety features alone include dual front airbags, side and head airbags for both front and rear occupants, and BMW’s new Active Knee Protection airbags for the driver and front seat passenger. The firm, supportive front buckets are available with an Active Ventilated Seat Package. This combines 20-way power adjustments with BMW’s Active massage system and a new ventilation system that ducts air through the perforated leather upholstery.

But the heart of the Seven’s sophistication is this prominent control knob on the center console that controls BMW’s new iDrive system. Controlling phone, navigation, entertainment, climate, suspension, and stability system functions, iDrive is very complex with over 600 functions. But we found the basic system to actually be easier to use than the Mercedes-Benz COMAND system. For the sake of safety, many of these functions can also be controlled by a second generation Voice Input System.

There are plenty of good, old-fashioned luxury and convenience features as well, including plenty of wood trim, retractable sunshades, seat heaters, and even an available heated steering wheel. And of course a huge rear cabin with available heat and Comfort seat packages.

And what does this all cost? Well, a lot, but less than you might think. The 2002 BMW 745i lists for $68,495. The long-wheelbase 745Li goes for $72,495. Big money, but it buys an incredible amount of luxury and technology. And lest we forget, an exceptionally capable driving machine as well.