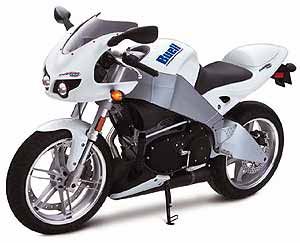 Harley Davidson has long been regarded as one of the world’s most tradition- bound motorcycle builders. But that image did change a bit in 2002 with the release of the progressive V-rod. But even before that, Harley’s Buell division was releasing some of the most innovative and intriguing new bikes on the market. Well, their latest creation is the XB9R Firebolt, and as you can see, it’s anything but traditional. But you only have to look at the 2002 Buell XB9R Firebolt to know that it’s about as far from a traditional Harley as a motorcycle can get. Its striking insect-like styling and ultra- aggressive stance are pure modern sport-bike. And like many current sport bikes, the Firebolt uses a twin-spar aluminum frame. But this frame, which is made in Italy, also serves as the fuel tank! While the stiff alloy swingarm does double duty as the oil tank.

The Firebolt is suspended up front by a set of fully adjustable 43mm inverted forks from Showa, which meet the frame at a super-sharp 21-degree rake angle. And at the rear an equally adjustable single shock is mounted high on the spine of the frame. The wheels are lightweight 17-inch alloys, the front hoops wearing an unusual 375mm brake disc that’s bolted to the wheel rim instead of the hub, and clamped by a powerful 6-piston caliper. The whole package rides on an ultra-short 52-inch wheelbase, the shortest of any modern sport bike.

The most traditional part of the Firebolt is the fuel-injected 984cc air-cooled 45-degree V- twin engine, which makes 90 horsepower and 68 pound-feet of torque. It exhales through a large single exhaust can, that sits directly beneath the engine, which turns the rear wheel with Harley’s proven belt drive, which never needs adjustment, thanks to this idler wheel that maintains constant tension on the belt.

And we were as impressed with the build quality as we were with the design. Buell’s sometimes dodgy fit and finish has been replaced with finely-crafted metalwork and an almost Asian attention to detail. Our only real complaints are with the sloppy fit of the rear cowling and exhaust headers that took on a funky, corroded look after only a couple of thousand miles.

But the proof of any motorcycle design is in the riding, and in urban traffic it feels docile and friendly, with a smooth ride and a surprisingly comfortable riding position. Clutch action is slick with good feel, though the positive 5-speed gearbox requires a firm kick to upshift. While Buell’s Uniplanar engine mounts do a fine job of isolating the V-twin’s substantial vibration. Stiffen up the suspension and hit the curves, and the Firebolt exhibits a tighter, more focused character. Focused enough for a race track like Summit Point West Virginia’s tight and twisting Jefferson Circuit, where we put it in the capable hands of AMA 250 Grand Prix racer Chris Pyles for a serious high speed shakedown. ‘‘The motor was definitely smooth power delivery. It wasn’t as much vibration as I had first expected. It does have good torque off the corners. It kind of signs off as you approach the red line. It feels like it’s still got some left, it might just be choked down a little bit by emission standards. The handling was really, really nice. It was very nimble through the corners, but without upsetting the front end. The front end felt well planted, but at the same time you could flick the bike very well from left to right. When you’re in the corner, mid corner, you can basically pull the bike down for more lean angle if you want. You can pretty much put the bike anywhere you want. It’s probably better than average as far as sport bikes go. I’m a hard braker, and I definitely liked them. The front brake, you get a lot of good feedback, good feel through the lever. It’s so good, you’re lifting the rear end up just a bit, so the back end wants to fishtail, squirm around a little bit.’‘&nbspChris Pyles

Sounds like a recipe for serious street riding fun, and with a few tweaks, a competitive race bike as well. The price is also competitive with that of today’s top sport bikes, $9,999 for a Firebolt of your own.

As we said earlier, the 2002 Buell XB9R Firebolt is as far from a traditional Harley Davidson as a motorcycle can get. But with its innovative design and razor sharp handling, looks set to start an exciting new performance tradition of its own.