First came the Escalade, the first truck to ever wear the Cadillac wreath and crest, a big SUV that’s a big success. So much so that now there is a second Escalade, the EXT sport utility truck, and that’s truck as in pickup truck. But can any pickup truck be worthy enough to be called a Cadillac?

We think the new 2002 Cadillac Escalade EXT could well be so worthy. After all, the EXT sticks to the same formula that has made its pedigreed parentage such an American mainstay. That’s to say, a stylish package, bearing loads of luxury backed by plenty of butt-kickin’ Detroit horsepower to move it smartly down the road. Throw in some ‘‘gee whiz’’ gadgetry and technology, and you’ll have a good idea where the EXT sport utility truck, is coming from.

You’ll also know it by its appearance. As the EXT shares its signature egg crate grille flanked by the tall, angular headlamps, and the rest of its bold chiseled look with its Escalade SUV counterpart. The EXT’s up-scale Swiss Army Knife- purpose in life however, is based on a crossover vehicle concept originated by the Chevrolet Avalanche. It’s a system that uses a tough, folding PRO TEC composite Midgate, that lets you convert the EXT’s plush 5 passenger cabin into several more utilitarian-minded configurations. 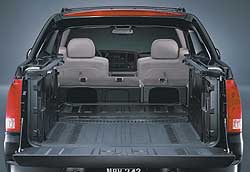 One of which turns the EXT’s 5 feet, 3 inch bed, into an 8 feet, 1 inch covered or uncovered load floor, secured by the lockable tailgate. The removable rear glass opens up even more possibilities. Perfect for transporting oversized antiques, a barn full of hand tooled saddles, or even a prized Harley. And for the smaller treasures, there are top-loading, lighted and lockable storage compartments in the sides of the composite cargo box.

All this utility without compromising the “Cadillac” level of comfort the brand is know for. That means Nauance leather heated seating surfaces with 10- way power adjustments and power lumbar supports and side bolsters. An attractive and functional chronograph-style analog gauge cluster. A Bose Music System with 6-disc in-dash CD changer and 7 speakers, including sub-woofer, all EQ’ed specifically to the EXT’s interior. And dual zone electronic climate controls with separate front and rear temperature zones and cabin filter. There’s also comfortable, Nuance-leather seating for 3 three adults in the back when the Midgate is not being pressed into service. And for both comfort and safety, there’s the ever ready OnStar Communications System that offers everything from emergency services to Web access.

Also “ever ready” and just as comforting should you choose it, is the EXT’s full- time all-wheel drive system. It uses a single-speed viscous coupling transfer case and all-speed traction control to move torque smoothly to the desired location when the need arises. Under normal conditions, a 32 percent front, 68 percent rear torque split is maintained. It’s the same system we first found useful in GMC’s Sierra C3 luxury pickup, and a feature oddly not available in the EXT’s prime competitor, the Lincoln Blackwood.

With the all-wheel drive system making sure the way is secure, the automatic self-leveling, computer-controlled Road Sensing Suspension system will make sure it stays smooth. RSS uses electronically controlled large bore 46 millimeter monotube shocks and a gaggle of sensors to provide the EXT with “real time” damping and control. It gives the EXT a ride that, while it may not rival that of the Coupe de Ville, could never be described as truck-like. And if that’s not enough, Cadillac’s renown StabiliTrak stability enhancement program is also on board in case things really get dicey.

The more mundane, but equally important task of braking is left to the 4-wheel discs with ABS, mounted behind the 17 inch wheels and tires.

While under the hood, things get considerably more exciting. Because powering the EXT is a tweaked high compression Vortec 6000 OHV V8 that produces a class-leading 345 horsepower and 380 pound-feet of torque. This Escalade-specific Vortec gets its zip from high-flow cast aluminum cylinder heads, a large bore throttle body and Electronic Throttle Control, along with a free breathing exhaust system. It feeds GM’s new heavy duty Hydra-Matic 4L60-E HD 4-speed automatic transmission with overdrive, and it’s an ideal pairing. As the gears are nicely matched to the engine’s powerband and shifts are positive, yet smooth.

The EXT moves smartly off-line, and there’s also plenty of power on tap for passing at highway speeds, even when loaded with cargo, or when putting the EXT’s 8200 pound towing capacity to work.

If you want to put the 2002 Cadillac Escalade EXT to work for you, you’ll need $49,990 and the patience to wait until January 2002 when it hits the dealer showrooms. But that price includes almost all the bells and whistles. The only two options are a sunroof and premium paint.

So with its bold American styling, innovative design, potent, refined powertrain, and Cadillac standard of luxury, you’ll understand that from where we stand, the crossover Escalade EXT looks like the perfect pickup for the Cadillac clan.