There’s a popular adage that says,“there’s nothing new under the sun,” and when looking at the vast number of car, truck, and SUV combinations and offsprings, it does seem that we’re reaching that point. But, you know something? Thanks to constant buyer pressure for innovation, and a lust to top the competition, automakers keep coming up with new variations on a theme to capture our attention. The latest of those comes from truck stalwart Chevrolet, and it’s called the Avalanche. So, lets see if the shadow it casts is new or not.

Well, the shadow cast by the 2002 Chevrolet Avalanche may not be entirely new; it is after all, just the latest cross-over utility vehicle. And, it is in large part based on the current Suburban. But to say Avalanche falls into the “nothing new under the sun” category would indicate one is blind.

There are loads of details within the Avalanche shadow that are new. And, to throw out another well worn cliche, “God is in the details,” those details add up to make the Avalanche a mighty interesting and innovative vehicle.

When the Avalanche concept burst upon the auto show circuit two seasons ago, there was no mistaking its heritage. Up front, the Avalanche quickly identifies itself as a member of the Chevy clan with its large, bow tie prominently displayed on the bright chrome bar that slashes horizontally across the boldest face we’ve seen on a GM pickup in decades. Fog lamps and tow hooks are well integrated into the massive one-piece bumper. Down the sides, the ruggedness continues with heavy duty, but stylish, body cladding to protect the Avalanche during close encounters with parked cars and boulders. 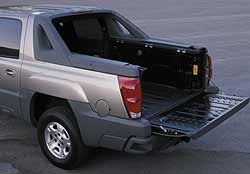 The Avalanche rides on the same 130-inch wheelbase as the Suburban. Which means it is more maneuverability than the typical full-size extended and crew cab pickups. But it is at the chopped-down rear where the innovative details of the Avalanche start to grab your attention. A large, lockable composite tailgate opens to access the steel bed, which can be enclosed with a hard three-piece cargo cover. Each panel can support 250 pounds and can easily be removed. Built-in corner bumper steps and grab handles aid in climbing into the bed. Moving forward, along the tops of the cargo box, are lockable storage areas. They hold about 3.5 cubic feet of gear. And, bottom drains allow the space to be used as coolers.

But the Avalanche’s trickest feature is found at the front of the 4-foot wide bed. It’s a midgate that forms the foundation of the Avalanche’s Convert-a-Cab System. The midgate and split-folding rear bench seat can be lowered to lengthen the 5 feet, 3 inch bed to a full, plywood friendly 8 feet, 1 inch long. For taller cargo, the rear glass can also be removed and stored in the midgate. The whole process takes less than a minute and can be easily handled by one person. This opens up the Avalanche for a nearly endless combination of cargo hauling options. Indeed, the Convert-a-Cab System makes the Avalanche the most versatile truck we’ve seen yet.

But there’s more. The first Avalanche to hit the streets is a half-ton, 1500 series in two- wheel drive or four-wheel drive. Under the hood is the Burb’s Vortec 5.3-liter V8 that pumps out 285 horsepower and 325 pound-feet of torque. It feeds a 4-speed automatic transmission with overdrive and tow/haul mode. Towing capacity is 8300 pounds.

Under the front is GM’s full-size truck independent torsion bar suspension, while the rear carries a 5-link coil spring and live axle setup similar to Tahoe. 4-wheel vented discs with ABS are charged with bringing the Avalanche to a stop, with 12 inch rotors up front, 13 inch in the rear.

Inside, the dash structure, control layout, as well as the front and rear seating areas, are pure Suburban. That’s to say, there’s gobs of comfort and room for 5 adults. Plus, fold all or part of the 60/40 rear seat for more cargo flexibility.

Two-wheel drive models can be equipped with a Z66 Premium On-Road package that includes 17 inch wheels [ 16 inch are standard ] a locking differential, traction control, and a suspension calibrated for optimum on-road performance. Four-wheel drive models use GM’s proven, fully automatic AutoTrac transfer case. They can be fitted with a Z71 Premium Off-Road package that also includes 17 inch wheels, plus skid plates, a locking rear differential, and a beefy off-road suspension.

For the hard working man or woman, a heavy duty 2500 Series Avalanche will join the line up later this year. Under its hood you’ll find a Vortec 8100 V8 that delivers 340 horsepower and a staggering 455 pound-feet of torque. It’s mated to a heavy duty overdrive automatic transmission that also includes a tow/haul mode.

A North Face Edition Avalanche will also make its debut about the same time. This special trim package will feature North Face-specific coloring inside and out, and a pair of North Face day packs that hook on the front seatbacks, among other things. And if that’s not enough, there are plenty of specialized accessories available to trick out any model you choose. These range from brush guards and roof racks to tents and coolers. High versatility, indeed.

Avalanche pricing is well up there too. The two-wheel drive models start at $30,965. Fully equipped goes for $35,409. Base price on the 4X4 is $33,965, while a loaded 4X4 brings $38,409. No word yet on pricing for the 2500 series or North Face models. But add up all the details, and the 2002 Chevrolet Avalanche is the first vehicle that lives up to the crossover hype. After all, its full-size rival, the Ford F150 Super Crew, is little more than a crewcab pickup with a short cargo box.

The Avalanche starts there, and adds the kind of innovation needed to cast a long crossover shadow. In fact, Avalanche designers took to heart the advice given those who encounter an avalanche of the snowy kind. Strive to stay on top, or get buried!