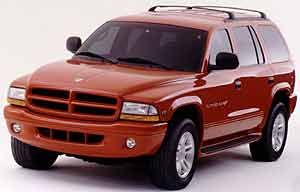 Ever since sport utility vehicles became America’s new family car, auto makers have been locked in a constant struggle to build the most appealing SUV. They’ve added wood and leather, giving them a more car-like ride, and loaded on high tech gadgets like satellite navigation systems. But despite the American drivers’ love for speed, few have chosen to take the high performance trail. One exception is Dodge. They’ve given their popular Durango the full R/T treatment. So let’s see how much more sport the Dodge boys have put in sport-ute!

Well, ‘‘sport’’ for a start, they’ve given the 2002 Dodge Durango R/T the biggest engine in any mid-size SUV. Under the hood resides Chrysler’s venerable 5.9-liter Magnum V8. This big-bore pushrod pumper cranks out 245 horsepower and 335 pound-feet of torque. The engine control module has been tweaked, and a more aggressive 3.92 limited slip differential fitted, to provide more off-the-line punch. The standard Durango exhaust has been replaced with a freer-flowing, chromed tipped system that adds hot-rod sounds to go with the hardware. The ponies gallop through a 4-speed automatic transmission and into a full-time 4X4 system with tough going low range. This Jeep Select-Trac system has a fixed torque split of 48% front and 52% rear for secure traction on dirt and tarmac.

The R/T also gets a firmer, sport-tuned version of its front torsion bar, rear live axle leaf spring suspension and a set of larger, 17-inch aluminum wheels, wearing stickier 275/60 Goodyear Wrangler all-season tires. To top it all off, the Durango’s exterior has been given a few little mods as well, namely larger body-colored wheel flares and running boards.

Inside, the R/T is mostly standard Durango, meaning warm, roomy and efficient. But the seats are sporty high-back embroidered buckets trimmed in suede and leather, the latter also used on the door panels. Behind that is the same roomy, but not terribly supportive, second row split bench, and on the R/T a standard third-row folding bench. Total cargo space with all the seats folded? 88.0-cubic-feet, proving that performance can also be very practical.

But what about that performance? Well, we rushed our Durango R/T to our test track, and were rewarded with a 0 to 60 time of 8.3 seconds. Good for any SUV and a half second quicker than the 4.7-liter Durango we tested in ‘98. The 1/4 mile took 16.4 seconds, at 85 miles-per-hour. The R/T feels even livelier, with near instant throttle response and that great exhaust note.

On our handling course, the R/T turns in with added precision, yet confirmed that it is still very much a truck. There is still lots of front push and body roll. But there’s also a lot more grip than you have a right to expect from any SUV, even if the steering stays numb. Braking is by way of the same front discs and rear drums as all Durangos. With optional ABS, our test vehicle stopped from 60 in an average distance of 133 feet. The pedal was soft but stability was excellent. So, overall, the R/T does out sport other Durangos, even if it’s still more show than go.

And, showing off the R/T on less frantic public roads is where this Durango comes into its own. It’s a lot more nimble than most SUVs, and with its snappy throttle response, maneuvering through traffic or charging down a country road is quite entertaining. Yes, the ride is firm and confident, but don’t call it unsophisticated or harsh.

Unless you’re riding to the gas pump, that is. EPA fuel mileage estimates are 12 city/17 highway. We averaged a wallet-unfriendly 13 miles-per-gallon in mixed driving. Oh, the price of performance.

The 2002 Durango R/T is not a sports car, but the package does give the Dodge boy’s mid-size sport-ute a feeling of exhilaration that very few compatriots can even approach. And, it’s great to see that at least one mainstream SUV brand understands that the term sport-utility-vehicle still starts with sport.