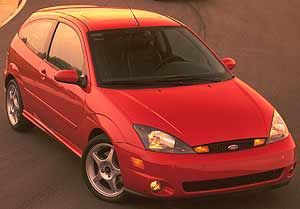 In the two short years since it was introduced, the Ford Focus has become very popular, especially with younger buyers. But like most small cars, high performance takes a back seat to interior room and economy. But the fact is, many owners are willing to spend thousands to soup up these economy stalwarts. That’s why Ford’s special vehicle team decided to inject their own healthy dose of testosterone into the Focus. So let’s see how much sharper the Focus can get!

To give the 2002 Ford Focus SVT precise clarity, Ford’s Special Vehicle Team made substantial changes to this popular 3-door econobox. The most significant of which are in the 2.0-liter dual-overhead-cam 4-cylinder engine. Starting with the standard Zetec, SVT added new just about everything, including heads, pistons, rods, flywheel, tuned headers, plus a dual-stage intake manifold and variable cam timing for the intake valves to really boost low end grunt. The revamped engine now makes 170 horsepower and 145 pound-feet of torque. That’s a big jump over the standard 130 horses. The transmission is a Getrag 6-speed manual. Tight and positive, it’s a huge improvement over the standard car’s nice but rubbery 5-speed. Suspension changes consist of stiffer springs, a thicker front anti-roll bar, and re-valved shocks to control roll and impact harshness. While the brakes are larger, standard 4-wheel discs, the only all-disc Focus sold here, with 4-channel ABS. The wheels are 17-inch alloys, wearing ZR-rated 215/45 Continental tires.

What does it all mean? It means a 0 to 60 time of 6.9 seconds. And a best 1/4 mile run of 15.4 seconds at 92 miles-per-hour. Over 2-seconds quicker than the standard Focus! Power is still concentrated in the upper rev band, but the bottom end is much stronger. Clutch feel, however, is very vague.

The real improvement is in the handling, as we found out on Georgia’s challenging Roebling Road Raceway. With its new underpinnings, the SVT feels much tighter, with substantially less front end push. There’s also less body roll, and while steering feel is not quite up to Cobra R standards, that too is much improved. Keep the revs up, and the Focus SVT pulls strongly off the corners, and powers down the straights with a sweet, muscular exhaust note. And when you get to a corner, the brakes are strong and fade-free. Stops from 60 averaged 119 feet with excellent control, even from triple-digit speeds.

Indeed, this is one very sharp Focus to drive, and sharp to look at, as well. The Focus SVT has received a number of subtle cosmetic tweaks, both inside and out. Exterior changes include a deep front fascia with SVT’s honeycomb grille and smoked headlight lenses, racier side rocker panels, and a sharp little spoiler on the rear hatch.

Inside, the SVT gets black leather-trimmed seats with deep side bolsters that really keep you in place. The pedals are more tightly spaced than standard, and wear racy metal covers, while the instrument cluster features electro-luminescent gauges, with oil temperature and pressure fitted to the right of the main cluster. It’s sleek and stylish, yet retains all the room, comfort and efficiency of the standard Focus.

And what does all this style and performance cost? Well, the base price for the Focus SVT is only $17,995. Add the optional audio system, power sunroof and winter package, which includes traction control and heated seats, and the price maxes out at a still bargain $19,660.

So the 2002 Ford Focus SVT offers Ford buyers all the high performance they want in a compact car, without having to build it in themselves. It’s a leaner, meaner, sharper Focus. One that allows you to focus on serious driving fun.