In the mid-90s, the sport-utility vehicle began a revolution of sorts. It was one that saw automakers combining the best attributes of small cars and trucks into a new class of compact and economical SUVs. Instantly dubbed the “cute-ute,” these street wise SUVs were more for all-weather cruising than off-road bruising. Now one of the first of this new clan was this 1997 Honda CR-V. But since then, a host of competitors have joined the parade. So to stay out front for 2002, Honda is releasing an all-new CR-V. But can their second “cute-ute” equal the success of their first?

To try and exceed the success of the original CR-V, Honda decided to start fresh with a chassis derived from the new-generation Civic. Therefore, the 2002 Honda CR-V shares few parts with its predecessor.

With a substantial 50% boost in torsional rigidity, and 30% improvement in bending strength, the stiffer CR-V’s underpinnings carry a body that is 1.3-inches wider, and 1-inch longer. But it rides on virtually the same wheelbase as last year. These small changes to the outside dimensions, belie big changes to the inside dimensions. Front shoulder room increases by 3.6-inches, while overall passenger volume grows a significant 7-cubic-feet. That’s almost enough room for another person. Cargo space also takes a big jump up. 33.5 cubic-feet with the split rear seats up, and 72 cubic-feet when tumbled forward. Or about the same as a Jeep Grand Cherokee.

CR-V’s folding picnic table that doubles as the cargo floor is once again standard. The two-way tailgate’s swing-up glass hatch makes for easy loading of small objects, but we still don’t like the outside mounted spare tire, and the way the main hatch swings to the right, which complicates loading large objects from curbside. 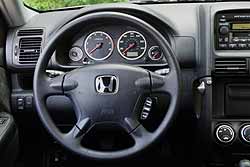 In addition to being larger, the new interior also features a trendy new dash design. The white-on-black analog gauges are sporty, if conventional. But both the shifter for the available 4- speed automatic transmission and the parking brake are now mounted directly on the dash, to free up floor space. The center stack includes cool-look, easy to use rotary climate controls down below, while perfectly placed at the top is a straightforward stereo head that features a 120-Watt AM/FM/cassette/single CD unit in LX-grade models, and an in-dash 6-disc CD changer in the EX. All facing larger front bucket seats with available side impact airbags.

The new interior is wrapped in sheet metal that is more aggressive, with bright chrome accents on the grille, and large multi-reflector headlights.

Behind that grille is a new 2.4-liter, dual-overhead-cam 4-cylinder engine, which makes 160 horsepower and 162 pound-feet of torque. It features the new i-VTEC system that adds Variable Timing Control with continuous cam-shaft phasing to the already proven VTEC two- stage variable intake valve lift and duration control. This further improves power, fuel efficiency, and emissions. Transmission choices are the aforementioned 4-speed automatic, or a standard 5-speed manual.

Mechanical changes continue, with the CR-V’s new Toe Control Link MacPherson Strut front suspension replacing last year’s double wishbone design. Though in the rear, a Reactive Link Double Wishbone suspension remains. Both are, like the chassis, shared with the Civic. We were able to extensively wring-out the entire package on the twisting rural roads of Pennsylvania during the CR-V’s national press introduction, and were immediately impressed with the new drivetrain. The CR-V now has real bottom end power, and keeps going at the top end when its predecessor would quickly run out of steam. It still displays some typical 4-banger harshness when revved hard, but compared to the last CR-V motor, the new 2.4 is a big step forward.

Handling, however, remains pretty much the same as before; modest front push, a well controlled rear. And, that’s not a bad thing, since the CR-V has always been among the most nimble yet safest of mini-sport-utes. And one of the most refined as well, with ride and noise control quality equal to that of its Civic cousin.

Of course, it wouldn’t be a sport-ute of any size without available 4-wheel-drive. And in the case of the CR-V, it’s Honda’s Real Time system, with its dual hydraulic pumps and multi- plate clutch, delivering seamless power to all four wheels in wet or slippery conditions. It’s not up to serious stump-jumping off-roading, but will certainly get you to work through your local monsoon or blizzard. Good thing brakes are all disc, with ABS standard on the EX.

Prices for the totally revamped CR-V were not available, but expect them to start at about $18,000 for a 2-wheel-drive LX model. The top-line 4-wheel-drive EX should be based at $22,000.

With the arrival of the compact “cute-utes” in the mid-90s, car makers brought the best features of cars and trucks together to create the urban SUV, ones fit more for all-weather than all-terrain. And, while some may question their ultimate capabilities, it is clear a car-truck combo is what more and more consumers want. And we suspect they will really want the roomier 2002 Honda CR-V, every bit as cute and even more capable than the original.