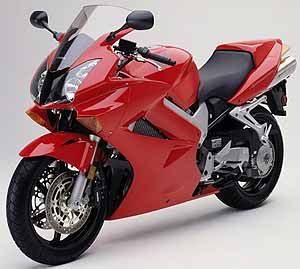 The performance advantage of a motorcycle has always been in its size and weight. Less mass to haul around means less power is needed for superior performance. Cars, on the other hand, need to be larger to have more room for sophisticated systems that improve safety and drivability. But don’t tell that to the motorcycle engineers at Honda, because they recently released this 2002 Interceptor, which offers motorcycle performance and automotive sophistication. Could this indeed be the best of both two- and four-wheeled worlds?

It’s certainly sophisticated enough to be. In fact, the 2002 Honda Interceptor packs almost as much technology per pound as any car. Chief among its sophisticated ‘‘automotive’’ features is its V4 engine configuration. But for 2002 the 781cc dual-overhead-cam 16-valve fuel-injected powerplant packs Honda’s VTEC or Variable Valve Timing and Lift Electronic Control system. A new version of the system used in many Honda and Acura automobiles, the Interceptor’s VTEC allows the 16-valve engine to run on two valves per cylinder below 7,000 rpm. Once that number is reached, an extension is engaged on the inactive valve stems, bringing them into contact with the cam lobes.

What this means in layman’s terms, is that once you hit seven grand, the Interceptor’s engine really comes alive, hurling the Interceptor up to extra-legal speeds like a rocket. But as anyone familiar with Honda engines knows, it’s a very refined rocket, with no harsh step in the power band when the VTEC engages. In fact, the torque rich power band, a silky smooth clutch, and a light, precise gearbox, make the Interceptor drivetrain just as appealing in city traffic as on your favorite twisty road. And on the road to a cleaner future as well, since the Interceptor engine already meets ultra-strict 2008 California emission standards.

The Interceptor is well equipped for curvy roads, with a triple box-section, twin-spar aluminum frame, the trick single-sided swing arm which mounts directly to the engine cases, fat 43mm cartridge forks, and a 40mm gas-charged shock with adjustments for spring pre-load and rebound damping. But with a wheelbase of 57.4-inches and dry weight of 472-pounds, this ‘‘gentleman’s express’’ is a bit chunky compared to the more hard edged sport bikes that it closely resembles. It’s at its best in fast sweeping corners, where its weight and wheelbase give it greater stability than shorter, lighter machines. But thanks to its solid chassis, tight suspension, and grippy tires, it can still hold its own pretty well in the tight stuff.

Much of that is actually due to the high, wide handlebars, which provide plenty of steering leverage. Those high bars and low foot pegs also give the Interceptor a more upright riding position. Add in a tall windscreen and a wide, well padded seat with a removable cowling over the passenger section, and you have a machine comfortable enough for all-day rides. That’s not something that you can say about most sporting two-wheelers! 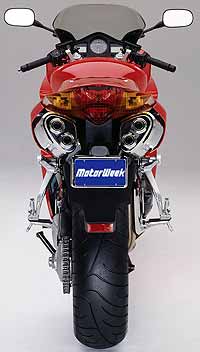 And when it comes time to slow down from all that riding, the Interceptor uses twin front and a single rear disc, all controlled by Honda’s clever, but controversial, linked braking system. Squeezing the lever activates five of the six front calipers, and one in the rear. Pressing the rear pedal kicks in the remaining front piston, and two more in the rear. Some riders trained to rely primarily on the front brakes feel that this robs them of some control. But the short stops and excellent stability are hard to argue with. And this is without the optional ABS. Keeping all this technology undercover is, as you have no doubt noticed, very aggressive bodywork. It’s headed up by an angular nose with faired-in turn signals and quad cat-eye headlights, and ends in a sharply-upturned tail with jewel-like brake and turn lamps and sharp- looking under seat twin exhaust canisters.

With the arrival of the 2002 Honda Interceptor, motorcycle buyers can now finally have both two-wheeled performance, and four-wheeled sophistication. Comfort, speed and technology in a package smaller than even the most compact car. The best of both worlds? We certainly think