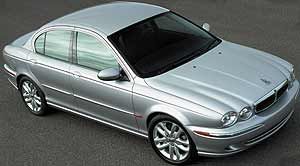 The only avenue to success in the auto industry, or any industry, is having the products that people want, when they want them. Despite this simple business principle, Jaguar, well known for its pricey mid-size and larger sedans, hasn’t been a player in the growing, near-luxury sedan class. But now Jaguar is ready to fill their empty niche with the all new 2002 X-type. But, can Jag’s new cat, even with all-wheel drive, claw its way to the pinnacle of budget luxury?.

That depends solely on how much the 2002 Jaguar X-Type’s impresses buyers who might otherwise opt for a Mercedes C- Class, BMW 3-Series, or Lexus ES-300. But,the Jaguar name alone makes it a serious player.

Beyond that the X-Type shares its basic platform with Ford of Europe’s new front-drive Mondeo sedan. But the all- wheel drive Jag has less than 20% of its parts in common with the Mondeo.

Size is spot on. Wheelbase 106.7-inches. Overall length 183.9-inches. Right in the middle of the near-luxury class.

Externally, the X-Type is every inch a Jaguar with the brand’s smooth, traditional sheet metal, and a low CD of 0.32.

The nose features a compact XJ-style grille, and four oval-shaped headlights with a Xenon option.

Which are the starting points for the multiple hood bulges, a Jaguar design cue that dates back to the original Mark-1 sedan prototype of the 1950s.

The tail is also reminiscent of the larger XJ sedan, but looks tighter, younger, more athletic.

The body meets the pavement by way of standard 16-inch alloy wheels. Opt for our test car’s Sport package, and you get 17-inch alloys wearing ZR-rated 225/45 tires.

Turning all-four Jaguars rims for the first time ever is a standard all-wheel-drive system. Developed by Visteon it uses a planetary center differential with a viscous coupling to send 40 percent of the engines’ torque to the front, and 60 percent to the rear. The engine’s themselves are two version’s of the S-Type’s AJ-V6 with variable valve timing. 2.5 or 3.0-liter in displacement, they combine Ford’s Duratec aluminum block with Jaguar designed twin-cam 24-valve alloy heads, all coming together at Ford’s Cleveland, Ohio engine facility.

Transmission for both engines include our test car’s 5-speed cable-operated manual, or a state-of-the-art 5-speed automatic, complete with Jaguar J-gate shifter with manual override.

With the pure manual gearchange being worked hard, the X-type sprints to 60 in 7.0-seconds flat. The 1/4 mile ends in 15.4 seconds, at 94 miles-per-hour. Power builds smoothly, and quietly, from a strong bottom end, until petering out at just over 6,000 rpm.

The manual shfiter handles it all very well. While a a little rubbery between gears, it’s light yet engages solidly, very much like a BMW.

The clutch unfortunately is also BMW like, lacking feel and engaging very late in the pedal travel.

But we have no reservations about the fully independent suspension, which consists of a twin-tube MacPherson strut setup up front, and a torsion control multi-link design in the rear.

It delivers a near neutral feel, with nicely weighted if somewhat numb speed- sensitive steering. If that sounds like the same comments we’ve made recently about the 3-Series, you’re right. But here the standard all-wheel-drive system, combined with sticky tires, and optional stability control, delivers tons of all-weather grip.

ABS-equipped 4-wheel disc brakes with Electronic Brake Distribution are standard. Pedal feel is a bit soft, but stops from 60 averaged a good 118 feet. Fade and stability were sport sedan level.

During rapid switchbacks, both at our test track and during our initial drive in France, we noticed that the body does tend to rock a bit, due to the soft springs. But the ultra stiff chassis nevers suffers the bends.

But those springs also give the X-Type an impressive level of ride quality. It’s just the right balance between sport sedan firm, and luxury car plush. Or, like a Jaguar.

As is the interior. On the sureface, 100-percent English luxury, with plenty of handsome birds-eye maple trim on the dash and doors…..

Modern touches include automatic climate with pollen and odor filters, and a clear control cluster that still has a familiar Jaguar style.

As does the 180 watt Alpine sound system, with 6-disc CD changer. But a higher dash placement would make fiddling less distracting.

Speaking of which, the optional 7-inch touch screen display, which incorporates audio, climate, phone, and a DVD-based satellite navigation system, is a more intuitive ssytem than most. Voice- activation can be added too.

Another option are 70/30 split folding rear seatbacks. Abundant rear seat room is not a hallmark of near luxury sedans and the X-Type approximates its competition.

This makes the 2002 Jaguar X-Type a more-than-competitively priced package. A price that, we think, along with styling, features, performance, and Jaguar heritiage, puts the top spot in the near luxurey class easily within a claw’s reach. Clawing up the competition in the process.