With the introduction of the 2002 Freelander, Land Rover now has three ranges of SUVs to sell in North America. But, the Freelander is quite a bit smaller than most recent Land Rover products, and that raises the question, is the Freelander a true Land Rover? Well we didn’t travel quite to the ends of the earth to find out, but almost  to the island volcanic nation of Iceland.

Located just south of the Arctic Circle, about half way between New York and London, Iceland is a nation that to North Americans is almost as mysterious as it seems remote. Yet, this nation, that rivals England in size, has a network of both paved and hard packed gravel roads that make many of the remotest regions reachable by car, or at least by SUV. That’s why Iceland was chosen by Land Rover to introduce its new Freelander to the American press.

Iceland has a population of less than 300,000, with the vast majority situated in and around the cosmopolitan seaport city of Reykjavik.

Over three days we drove Freelander through some of the most remarkable terrain on the planet, experiencing just about every conceivable type of road. Arid valleys, volcanic peaks, rushing rivers, and huge glaciers, make this a wonderful place to test sport-utility vehicles.

As a young island, with numerous active volcanic areas, it was no surprise to find that barren lava rock not only makes up much of the scenery, but is the stone of choice for most rural roads. Both porous and sharp edged, even when ground to a fine stone, Lava rock can produce a challenging surface for normal street tires. And, all of the Freelanders we drove had U.S. spec tires. 17-inch on SE and HSE models, and 16-inch on the base Freelander S. While the 17-inchers were not the quietest tires we’ve tried, they did a fine job on lava, pavement, and ice.

For you can’t come to Iceland without trying the national sport of Glacier Driving. We managed to drive Freelanders about a mile up the vast Langjkull Glacier on street pressure. This gave us a solid idea of how its permanently engaged four-wheel drive system performed and how the first Land Rover with an all-independent suspension would cope with the deep fissures that radiate across the glacier.

Normal driving sees a 70/30 torque split, front to rear. But, up to 95% of the torque is available to the front axle, with a maximum of 50% available at the rear. Freelander has no locking differentials or low range. It directs torque from the wheels that slip to those that grip, with a center viscous coupling and all-speed traction control. Minimum ground clearance at 7.2 inches is more than ample for most uses, and Land Rover has done a good job of tucking hardware up out of harm’s way. But, even with 7-inches of front wheel travel and 8-inches in the back, the independent suspension did leave you with only three wheels on the ground more often than not.

The Freelander’s suspension has been tuned for a combination of traditional Land Rover soft ride, and a new manner of car-like handling. Big undulations are soaked up without passenger discomfort, while you may hear small sharp impacts a lot more than you’ll feel them. When the road gets really rough, there is some steering wheel kickback, but otherwise the Freelander changes directions promptly, with an easy to correct nature even when the rear slides out around a lava-coated turn. On paved roads the steering feedback is much less, but effort is light and will be natural to any newcomer to SUVs.

And, there may be many since Freelander is aimed at a much younger audience than its Land Rover stable mates. To that end, they will find a sportier interior than typical for the brand. One sits on well supported and well isolated seats. The top level HSE gets a unique leather trimmed sport seat with added side support, while the SE also comes with leather, and the S in durable cloth. If we had a complaint it is the lack of height adjustment. Six footers sit too close to the headliner.

Yet, that allows excellent visibility over the Freelander’s long aluminum hood. Which, when popped, reveals plenty of space for a new, transverse mounted 2.5-liter V-6. Using a three stage variable induction system, twin overhead cams and 24-valves, 175-horsepower and 177 pound-feet of torque are available through a light, drive-by-wire throttle pedal. At full gate, there is a delightful engine note without the undue vibrations of some competitors. Power levels are ample but there is always room for more. 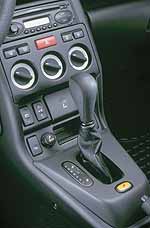 However, more gears are provided. Freelander has the first 5-speed automatic in its class, and it includes manual-shift capability. There’s also a Sport Mode for quicker upshifts. Both systems designed to compensate for the lack of a true manual transmission.

As is Land Rover’s well regarded Hill Descent Control. With little engine braking available for downhill creeping, HDC uses the standard anti-lock brakes to limit speeds to less than 6 miles per hour. Navigating less serious inclines is helped by the HSE’s satellite navigation system, another first for its class. The rear seat is fine for two adults or three children, and everything folds flat for 46.6 cubic feet of cargo room. While the rear door with the outside spare tire is not our favorite, at least the window lowers for loading small items.

Now, Land Rover is a premium brand, and that usually means a big price. But, not in the case of the Freelander. Stickers begin at a modest $25,600 for the S, or about what other loaded small SUVs go for. The SE adds sunroof and leather for $28,400, while the HSE trims out with navigation unit at $32,200. Prices that make this Land Rover accessible for more buyers on their way up, or down, or over and around just about any road we could find, in Iceland anyway.

At this point most SUV enthusiasts know as little about the Freelander as we did Iceland before our trip. But, just as we came away from this Nordic land impressed by the warmth of its people and the amazing variations of its geography, we also left convinced that the Freelander is every inch a Land Rover.