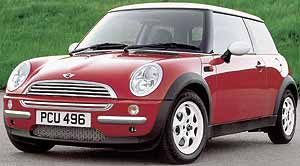 Very few cars are truly timeless. In fact, we can think of only two: the German Volkswagen Beetle and the British Mini Cooper. But while the Bug was a huge hit here and spawned a New Beetle for 1998, only about 10,000 Minis ever made it across the pond. Well, BMW, which now owns the Mini brand, is out to change all that with this all new 2002 Mini Cooper. Among enthusiasts it’s one of the most anticipated cars of the decade. But should anyone else care?

Well, BMW wants everyone to care about the new 2002 Mini Cooper, so they’ve designed a car that offers equal parts nostalgia, style and contemporary performance.

The nostalgia part is very up front. The new Mini is clad in two-box sheet metal that mimics the 60’s original where it counts. In the grille, the headlights, but then adds the smoother flow of a 21st century design. While its 142.8-inch length is the shortest of any car sold here, BMW also maintained the original’s minimalist fender overhang by pushing the wheels out as far as they can go with a surprisingly long 97.1-inch wheelbase. That, plus a wide 57.7-inch track, is meant to give this smallest of retro compacts the cornering stability of a much larger car.

Under the semi-vintage skin is a thoroughly modern platform. One with 50% more torsional rigidity than a BMW 3-Series. It rides on a MacPherson strut front and multi-link rear suspension. And rolls along on these standard 15-inch alloys. 16-inch wheels with run-flat tires are part of the Sport Package. The high performance Cooper S due this summer will be fitted with 16s standard, and 17s as an option.

The original front-drive Mini featured a then revolutionary transversely-mounted 4- cylinder engine. Today’s Mini Cooper also uses this now typical layout, but with a totally modern 1.6-liter single-overhead-cam, 16-valve powerplant. Output is 115 horsepower and 110 pound- feet of torque. The Cooper S adds a supercharger for 163 horsepower and 155-pound feet. Transmission choices for the Mini Cooper are the standard 5-speed manual with a light, crisp feel, or an optional CVT continuously-variable automatic with 6-step manual-mode shifting.

With the manual, our test Mini Cooper pulled to 60 in a respectable 8.1-seconds. While our 1/4 mile elapsed in 16.4 seconds at 85 miles-per-hour. Minimal clutch feel makes a smooth launch difficult, but once up to speed the Mini delivers most of its modest power from 3,000 to 6,000 rpm. The engine is very refined and quiet.

At the other end, the Mini Cooper stops from 60 in an average of 130 feet, a bit long for a car that weighs only 2,315 pounds. But stability is excellent, thanks to very contemporary ABS- equipped discs.

But it’s when the Mini Cooper hits the curves that it really shines. On a tight slalom turn in is very quick, as is the electro-hydraulic power steering. The car is very solid and neutral until pushed to the limits, then the rear end starts feeling a bit light. On public roads, however, we noticed a bit more push scrubbing off speed in a safe, predictable manner. And in long sweepers there is a bit of sports car-like four-wheel drift. It’s great fun! Even without the optional Sport Suspension Plus, the ride is on the firm side, bouncing you around a bit on rough roads. But it soaks up mid-corner bumps with hardly a stutter, making the Mini an absolute delight to toss around on our favorite twisty byways.

Inside, the 2002 Cooper preserves the original Mini concept of maximum space in a minimal car, but adds more than a dose of up-to-date style. The cabin is very generous, with more front head and leg room than many much larger cars. A huge sunroof is part of the Premium package. But standard is a full complement of state-of-the-art front, side and curtain airbags. Now, some of our staff complained about the driver’s side foot well. It seemed a little tight for smooth pedal operation. The standard vinyl trimmed bucket seats are stylish with standard height adjustment. But they are also rather flat with little side support for spirited driving. Optional sport seats with higher side bolsters are recommended. They face a dash that’s again retro yet modern, and very distinctive. The huge, centrally- mounted speedometer looks cool, and can be monitored with the barest of glances. It can be replaced by a navigation system, in which case the speedo moves to the steering column, where on our very basic Mini the tach is located, right where it should be. Other controls for the standard in-dash CD player and air-conditioning are very straightforward. There are even toggle switches for the windows.

The split folding rear seat is stylish, and if no one hogs front leg room, quite manageable for adults, and practical when folded to expand the hatchback’s tiny 5.3 cubic-foot trunk.

But then the Mini Cooper isn’t about utility, it’s about fun. Affordable fun. The Mini Cooper carries a base price of only $16,850. Most options are included in the simple to order Premium and Sport packages. When it arrives, the Cooper S will start at only $19,850. Now BMW claims they’ve barred Mini dealers from marking up the car, but in some areas we’ve noticed pricey dealer accessories being added. So shop around.

Despite its history and performance, the 2002 Mini Cooper isn’t just for the hard-core enthusiast. It’s for anyone who wants to add a little sports car-like fun to their daily drive and get a taste of the spirit and character of one of history’s most enduring and endearing little cars. Like us, you’ll fall in love with the Mini.