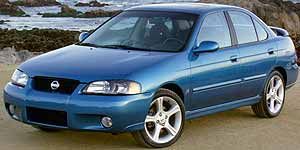 The Nissan Sentra has always been a pretty darn good compact car. So good, that we named it our ‘‘best small car’’ in last year’s MotorWeek Driver’s Choice Awards. But among the compact performance crowd, the quicker Sentra SE-R, which was only available from 1991 to 1994, has always been the small Nissan of choice. Well SE-R fans rejoice, because for 2002 their favorite pocket rocket is back. But this time, they’re getting much more than just another hot little sedan!

They’re getting two hot little sedans! For 2002, Nissan has not only re-introduced the Sentra SE-R, this time as a 4-door, but added some extra spice to the lineup with an additional version called the SE-R Spec V. Both versions are very clearly aimed at younger performance sedan buyers, with trick styling add-ons not found on XE, GXE or SE-grade Sentra siblings. That includes a deeper, more angular front fascia, with integrated fog lamps, and a mesh- pattern grille, a standard rear spoiler and a chrome exhaust tip to finish things up.

Both SE-Rs are powered by an all-new 2.5-liter dual-overhead-cam 4-cylinder engine with lightweight pistons, an electronically controlled throttle, and variable valve timing. In the SE-R, it delivers 165 horsepower and 175 pound-feet of torque. The addition of a specially tuned exhaust system gives our SE-R Spec V an extra 10 ponies for a total of 175. Torque also bumps up to 180 pound-feet. Transmission choices for the SE-R, are a standard 5-speed manual, or optional 4-speed automatic. While the Spec V gets a slightly rubbery 6-speed manual, linked to a torque sensing limited slip differential.

Hit the go pedal, and the Spec V shakes and shimmies, as the front Continentals struggle to put all 175 ponies on the pavement. Once they hook up, the Spec V delivers a 0 to 60 time of 7.1 seconds. And romps through the 1/4 mile in 15.5 seconds at 90 miles-per-hour. Like the old SE-R, the Spec V is a buzzy beast under hard acceleration. It launches strongly for a 4-banger, but makes its best power in the top end of the rev band.

Of course, power is nothing without handling, so Nissan has given the SE-R firmer struts, and a strut tower brace to stiffen up the body. In addition, the designers of the Spec V tightened up the spring rates, and altered the damping characteristics. There’s plenty of grip from the sticky Continentals, and little body roll. But the power rack-and-pinion steering is too light, and lacks feel. That, plus the strong torque steer, makes the Spec V a real handful when powering out of tight corners.

Push it hard on an undulating back road, and the Spec V feels nervous and darty. It demands your full attention as a driver, but delivers some real thrills in return.

On a more practical note, the Spec V is equipped with 4-wheel disc brakes, with ABS available as an option. They’re quite strong, and allow the Spec V to stop from 60 in an average distance of 117 feet. Pedal feel is good, though the lightweight Sentra chassis does wiggle a bit under the stress of hard braking.

Now let’s turn to our test car’s interior accommodations, which are every bit as sporty as the mechanical bits. The sport-style bucket seat design, with its unattractive black-and-red accents, is borrowed from the Japanese market Skyline supercar. It provides plenty of both comfort, and support. And holds you tight during spirited driving. The driver’s seat faces a set of trick looking analog gauges, with orange illumination. And just to the driver’s right, sits the optional Rockford Fosgate 300-watt 9-speaker audio system. It includes a 6-disc in-dash CD changer, and an 8-inch subwoofer in the trunk.

Base price for the Nissan Sentra SE-R with a manual tranny is $16,539. Add in the automatic gearbox, and the price is $17,339. Go whole hog with an SE-R Spec V like our test car, and the ticket is still only $17,539. That puts the SE-R in the same ballpark as the Mazda Protege MP3 and the forthcoming Honda Civic Si. Though the Spec V’s power and equipment push it towards the territory occupied by the pricier Acura RSX Type-S and Subaru WRX.

Clearly the 2002 Nissan Sentra SE-R and SE-R Spec V are more than SE-R fans have ever had before, and much more than just another pair of hot little sedans!