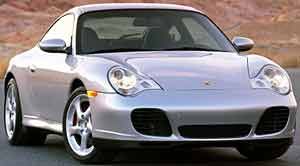 For many Porschephiles, the 911 Turbo is the ultimate Porsche. And the case for their claim is strong. Aggressive styling, superb handling, all-wheel drive, and a way potent powerplant that’s easily managed in humdrum daily driving. Until it rains or snows, that is, and then our vote for the ultimate 911 swings to the slightly less extreme all-wheel drive 911 C4S. It doesn’t have a turbo, but it still has plenty of grip!

Indeed, except for a couple of spinning turbines, this 2002 Porsche 911 Carrera 4S is a 911 Turbo. In plain English, the C4S is built on the same all-wheel-drive chassis, with the same pavement potency. And it’s one potent looking Porsche too, although we admit not as aggressively trimmed as the Turbo. And, to more discrete buyers, that’s a plus. The front does don a new spoiler, shaped just for the weight and aerodynamics of the C4S, while the flanks lack the large intake ducts that feed the Turbo’s twin intercoolers and turbos. Out back, the C4S carries the standard Carrera’s motorized spoiler, which deploys automatically at speed, instead of the fixed design on the Turbo.

Under that rear deck, there’s still potent power, too. The 3.6-liter normally-aspirated flat- six produces 315-horsepower, and 273 pound-feet of torque. While a hundred horses less than the Turbo, the C4S still packs more punch than a prize fighter. All that power roars through either our test car’s standard 6-speed manual, or an optional Tiptronic 5-speed automatic, and into the same full-time all-wheel-drive system that harnesses the Turbo’s fearsome 415 horses, finally meeting the road by way of 18-inch Turbo wheels, the rear wearing huge 295/30-Series tires. Which, thanks to the all-wheel-drive and standard Porsche Stability Management System, grip the tarmac with a tenacity bettered only by a pure-racing machine.

There is a touch of understeer on corner entry, but it’s far less than most all-wheel drive machines, which turns into a solid, neutral feel at mid corner. The fixed-effort power steering is quick and precise, delivering superb feedback. But all-wheel-drive or not, abrupt steering inputs can still break the tail loose. And, while it’s not the beast of the former 911s, even this C4S must obey the law of physics. But drive it in a smooth, controlled, educated manner, and it will reward you with levels of grip that almost seem unworldly.

All that grip also helps the C4S in a straight-line, allowing sprints to 60 in only 5.2 seconds. The 1/4 mile disappears in 13.7 seconds, at a crisp 105 miles-per-hour. The lack of wheel spin, but still freight-train-like torque, punches you back into the seat, almost like the Turbo. And that power continues in a smooth, linear flow, all the way to the engine’s 7,300 rpm redline. The clutch is heavy, but has excellent feedback. The 6-speed manual shifter engages easily, despite a slight, but familiar rubbery feel.

The same goes for the brake pedal. It activates the Turbo-sized 13-inch ABS-controlled discs, which yank the C4S down from 60 in an average of 124 feet, with rock-solid stability.

This year all 911s benefit from recent upgrades to the Turbo interior, and the C4S is no exception. The dash features a more organic look that’s all flowing curves, and a set of large, comprehensive analog gauges, with a trip computer readout in the tach. These face the same power-adjustable, leather-clad, sport seats found in the Turbo, which provide a high level of both comfort and support. Almost as powerful as the engine is the available Bose 12-speaker digital audio system. Add the 6-disc CD changer, that still resides in the trunk, and there is enough high quality music to let you ride with the Valkyries for as long as you want.

As for the price of all this fun, the 911 C4S 6-speed starts at $80,965. The Tiptronic automatic boots the sticker to $84,395. A tremendous amount of money, sure, but over 30-grand less than a Turbo. And it buys a super car that is easy to control, and as comfortable being horsed around a race track as it is meandering down a winding country road.

Of course, if relaxed open-air motoring is on your agenda, then might we suggest another Porsche, the 2002 911 Targa.Now, long gone are the days of the traditional bulky, removable Targa panels. Today’s Targa sports a slick power-slide glass roof. While perfect for warm weather commutes, wind buffeting is virtually extinct, and it also keeps the outside at bay during the off seasons.

And the Targa uses the same 315-horsepower flat-six drivetrain and rear drive layout as the hardtop Carrera, but weighs only about 150 pounds more, and costs $75,965. While that is a hefty $7,300 more than the Coupe, it’s still $2,400 less than the pure drop top Cabriolet.

But whether you prefer the heady breezes of the Targa, or the heady performance of the C4S, either way you’re in for the stimulating driving experience that only a Porsche 911 can deliver.