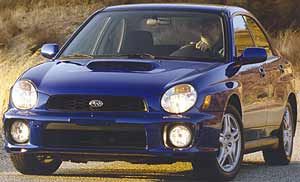 Subaru is a company with an international record of motor sports success. A record that we here in the United States have only recently come to appreciate. What we have appreciated, however, are the numerous special high performance cars that Subaru has released overseas to celebrate its road rally success. But now, finally, one of those designs, the WRX, has come to American shores. Was it worth the wait? Well, let’s look at this 2002 Subaru Impreza WRX sedan’s equipment list, and see what they’re delivering.

The WRX starts with a new exterior, that shares little with the standard Impreza model. The nose is wide and more aggressive, with extra-large, multi-reflector halogen headlamps, and standard rally-style fog lamps. While the sides feature ground-effects side moldings and blistered fenders, another nod to Subaru’s championship cars. They cover standard 16-inch alloy wheels, wearing big footprint 205/55 Bridgestone tires. 17-inch wheels are optional. At the tail end, a more angular look has been adopted, with wrap-around taillights, and a scooped-out rear deck lid.

But possibly the most significant exterior feature is the now fully-functional hood scoop. It feeds cool air to a turbocharged, intercooled, 2.0-liter horizontally-opposed 4-cylinder engine with dual-overhead-cams and 4-valve heads. Power output is a very healthy 227 horsepower and 217 lb-ft of torque. Which drives through a 5-speed manual transmission, or 4-speed automatic, And into either Subaru’s Continuously All-Wheel Drive System, with its bevel-gear center differential and limited-slip viscous coupling, or on automatic transmission models, the Variable Torque Distribution system used in the Outback VDC, which utilizes a hydraulic transfer clutch, and planetary gear-type center differential.

With manual trans and Continuous all-wheel-drive on-board, the WRX dashes to 60 in 5.6 seconds. And through the 1/4 mile in 14.3 seconds at 95 miles-per-hour. That’s as quick as an Audi S4! The punchy 2.0-liter turbo winds up quickly. There is a bit of lag down low, but the engine reaches peak torque by 4,000 rpm, and pulls hard all the rest of the way to the 6,000 rpm redline.

But it’s in the curves, not on the straights, where the WRX really impresses. Especially the curves of Georgia’s Roebling Road Raceway, where we found the WRX to be an absolute ball to drive. Turn in, and there is the expected all-wheel-drive push. But a simple lift of the gas pedal, and the back end drifts gently out, giving you a nice straight line out of the corner, and allowing you to put the power down early.

The power rack-and-pinion steering, with its 16.5-to-1 ratio and load-sensitive pump, is plenty quick, and offers gobs of feedback. While the firm McPherson strut suspension minimizes body roll. And the 4-wheel discs with standard 4-channel ABS consistently delivered strong, sure braking lap after lap. This is one potent little car!

Of course, after such huge upgrades to its performance and styling, Subaru designers had to redo the Impreza interior as well. A new dash offers a more straightforward control layout, while the WRX model adds a 4- spoke, leather-wrapped Momo steering wheel, silver trim around the large, analog gauges, aluminum pedals, with rubber grip pads, and deep, grippy sport seats, with plenty of support for spirited driving.

And spirited driving is what the WRX Sedan is all about. Yet it sells for only $24,520 with a manual transmission. Add the automatic gearbox, and the price is $25,520. Need more room? Well, an almost as cool WRX Sport Wagon is available for about $500 less. No wonder the first six month’s allotment of cars is already sold out!

The 2002 Subaru Impreza WRX is America’s first taste of the special high performance models that Subaru fans overseas have enjoyed for years. It’s a veritable poor man’s M3. A factory rally car, for drivers on real world budgets. Fast, fun, and after all this time, well worth the wait!