SUVs may have replaced the station wagon as America’s family hauler of choice, but that doesn’t mean that wagons are completely out of favor. In fact they’re making something of a comeback. But the new image of a station wagon is a far cry from traditional full-size behemoths from yesteryear. Plenty of active lifestyle drivers favor compact wagons to carry sports equipment and pets. And one of the newest compact wagons on the market is this Volkswagen Jetta wagon. A versatile square back that begs the question…do you really need an SUV?

Well, to SUV or not SUV is a pretty tough decision. Because those that are passionate about their transportation like we are know that when it comes to choosing a vehicle, what you need often takes a back seat to what you want!

But for those who are prepared to at least consider an SUV alternative, this 2002 Volkswagen Jetta wagon could fill both the want and the need. If for no other reason than this compact wagon shares all of the same traits that make the Jetta sedan VW’s best selling US model.

For instance, there’s the tight-gapped, nearly seamless look of the car’s design that imparts an aura of solidity. And then there’s performance. Our top-of-the-line GLX tester came with Volkswagen’s potent 2.8 liter, DOHC, 12-valve VR6 under the hood. This narrow angle V6 delivers 174 horsepower and 181 pound-feet of torque. And at the track, where we stirred it up with the 5-speed manual transmission, our 0 to 60 time of 7.5 seconds was almost a second quicker than a VR6 automatic-equipped sedan we tested earlier! Our quarter mile trap time of 15.8 seconds with a speed of 91 MPH was also a shade quicker. For those not wishing to bang gears, the wagon also comes with that crisp 4-speed automatic.

It was nearly the same story when it came to handling. After a trip through the low speed slalom, where we did notice a hint more body roll, our testers admitted that if you were blindfolded, you probably couldn’t tell the sporting differences between the wagon and the sedan. It was only when tackling the high speed lane change exercise that the wagon’s additional weight bias at the rear came into play. As during correction, the rear felt as though it wanted to side step a bit. But it was never unmanageable.

Like the sedan, the wagon utilizes a straightforward MacPherson strut front, torsion beam rear suspension set up with coil springs, gas shocks, and stabilizer bars. Traction control is standard. And as you might suspect, the wagon also shares the sedan’s 4-wheel disc, anti-lock braking system. Our stops from 60 averaged 123 feet, with excellent stability and just a touch of nose dive. Stable and solid, but never harsh, were just a few of the sentiments that often came up when discussing the Jetta wagon’s highway ride. Which was also without a lot of road noise and pressure booming from the rear quarters. An affliction that’s typical of wagons, as well as numerous SUVs.

So, the Jetta wagon is no slouch when it comes to interior comforts either. Top drawer GLX models like our tester come with standard 8-way power adjustable leather sport seats. Seat heat is included, too. A tilt/telescoping steering column is also standard, with audio and cruise controls on the leather wrapped steering wheel, as is a premium 8-speaker Monsoon audio system. But surprisingly, a CD-player remains an option. However, the automatic Climatronic ventilation system has pollen, dust, and odor filters. There’s also tasteful genuine wood trim and a full complement of front and side impact airbags as well as Volkswagen’s Side Curtain Protection system. It’s standard on all Jettas. 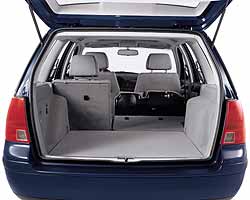 In the rear, you’ll find seating for three, although for maximum comfort, you’d better stick with two. Behind the 60/40 split seatbacks, there is 34 cubic feet of cargo space, which is, according to VW, expandable to 70.6 cubic feet with the seats folded. Now that’s more room than the Mercedes C-Class sports wagon, and about the same as a Jeep Grand Cherokee.

And when compared to the more uppity wagons from the likes of BMW, Volvo, and Mercedes, the Jetta wagon is a lot cheaper, too. Base price on the entry level 115-horsepower 4- cylinder GLS model is just $19,200. The base and as tested price of our loaded GLX is $26,050. Or, about where the most popular SUVs start!

So, do you really need an SUV? Well, maybe you do and maybe you don’t. But from our perspective, with the increasing availability of cool compact wagons like the 2002 Volkswagen Jetta wagon, if you love to drive and need to carry a lot of stuff, this is way to do it.