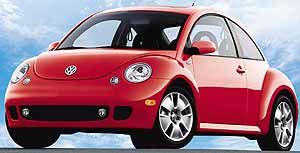 Since its 1998 intro, the Volkswagen New Beetle has been a critical success with everyone from teenagers to retirees. VW then built on that success by conjuring up the Beetle Turbo, for the more enthusiast oriented customers. Well, now Volkswagen has unleashed what may be the ultimate scooter bug, the New Beetle Turbo S. Now just who will this little powerhouse appeal to?

Well, the 2002 Volkswagen New Beetle Turbo S should appeal to just about anyone who wants a Beetle with a little more juice! And in the Turbo S, that extra juice flows throughout the entire car, not just from the engine bay. Up front you’ll find a deep, serious looking spoiler, complete with integrated fog lights and new turn signal. In the back, a newly designed bumper, Turbos S badging, and dual chrome exhaust tips round out the look. The Turbo S also comes standard with its own 17 inch alloy wheels and a speed activated rear spoiler for down force. It deploys at 45 MPH and lowers at stops. But the constant up and down, which sounds like a piece of ice breaking away from the roof, is annoying. So, we suggest Volkswagen raise the deployment speed to a more meaningful velocity.

All of this is made possible by the Turbo S’s real juice which comes from a pumped up version of Volkswagen’s ubiquitous 1.8 liter turbocharged 4. Found in a variety of VW and Audi models, most notably the GTi and Audi TT, with its five-valve technology, and new software programing, in the Turbo S this muscular little motor spits out 180 horsepower and 173 pound- feet of torque. That’s a gain of 30 horsepower and 11 pound-feet of torque over the standard Turbo model.

And at the track, our drivers noticed the extra juice in a big way. As the Turbo S sprints to 60 in just 6.6 seconds, trimming almost a second off the time of the standard Turbo we tested several years ago. The quarter mile passed in 15.3 seconds at 94 MPH and was also quicker.

To conquer the Turbo S’ noticeable turbo lag at launch, we spun the 1.8T up to 4500 rpm before dropping the clutch. But thanks to new software, the 1.8T’s peak torque in the Turbo S stretches all the way from 1950 to 5,000 rpm. So once you get going, you’re gone! The Turbo S also gets the TT Roadster’s tight, quick-shifting 6-speed manual transmission, VW’s first. No automatic is available or wanted.

To keep all that extra juice from going to your head, Volkswagen has included a little extra insurance in the form of an Electronic Stability Program. But when taking on our low speed slalom test, the Turbo S handles so well you really have to be over driving the car to activate the ESP. Turn ins are spot on, with very little understeer and only a slight tendency to oversteer in mid corner if you’re really honking. Steering feel is excellent and body roll is minimal and controlled. The general feeling among our drivers is that with stickier tires and a few tweaks to the MacPherson strut, torsion beam suspension that the Turbo S shares with all other Beetles, this bug could be an autocross monster.

The Turbo S also received two enthusiastic thumbs up when it came to braking. With ABS-controlled discs at all corners, we averaged stops from 60 in 120 feet. Our drivers liked the firm pedal feel and the minimal pulsing from the ABS system, and after 8 runs, brake fade was nowhere to be found. It’s a system that imparts a high degree of security. As does the rest of the car with its high ratings in crash tests and a long list of passive safety features that includes front and side impact airbags. So inside of the Turbo S is a very safe, fast place to be.

And it’s pretty comfortable, too. With an already impressive menu of standard comforts, Volkswagen designers have juiced the Turbo S’ interior with special leather heated sport seats, a leather-wrapped steering wheel, handbrake grip, and shifter boot. Stainless steel pedals and real brushed aluminum trim throughout the car are also part of the Turbo S package. It’s a package that’s so complete, only a trunk-mounted 6-disc CD changer is optional.

As you might expect, a Beetle that offers more juice also requires more juice from you to own. But not too much. MSRP on the 2002 New Beetle Turbo S, including destination, is $23,950. While that’s nearly 8-grand more than an entry level Beetle GL, it is competitive with a fully equipped, and slower, Mini Cooper S, and very reasonable for so much driving fun in such a little package. In fact, after a spin in the 2002 New Beetle Turbo S, other New Beetle owners may be wondering why they didn’t wait and get their Beetles juiced!