Volkswagen is a company known for great small cars like the Beetle and Golf. Even their biggest car, the Passat, is pretty compact by American standards. And small cars usually mean small engines. But Volkswagen is breaking out of that box with its largest, and most unique, engine ever. It’s the new W8 , yes, I said W-8. And it arrives under the hood of the latest Passat.

And it’s only the beginning of what could be a new and more adventuresome Volkswagen! The 2002 Passat W8 is the first step on a road that will eventually see Volkswagen challenging Mercedes-Benz and BMW in the highest volume luxury car segments.

Of course, it won’t be with the compact Passat, but with their biggest sedan ever, the all- new Phaeton, which will arrive early next year, and will be powered by both the new W8 engine and an even more remarkable W12! But thanks to Volkswagen’s decision to also push the Passat up market, we don’t have to wait for the Phaeton to find out what the company’s new ‘‘W’’ engines are all about. 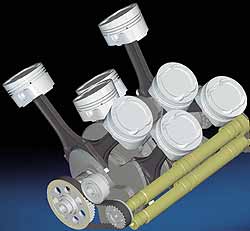 More accurately described as a ‘‘double V’‘, both the W12 and W8 are offshoots of Volkswagen’s proven narrow-angle VR6 engine. They use two banks of cylinders, aligned at an angle of 72-degrees. But within each bank, pairs of cylinders are further separated at only a 15- degree angle. Each bank of cylinders is topped by a 4-valve head, each with dual adjustable camshafts. While vibration is controlled by a pair of balance shafts, which move in opposite directions at twice the speed of the crankshaft. Which is itself an unusual ‘‘flat’’ configuration, designed to maximize torque.

Total displacement for the W8 is 4.0-liters. Maximum power output is 270 horsepower at 6,000 rpm, while its peak torque of 273 pound-feet is available at only 2,750 rpm. To control the flow of this power, Volkswagen has equipped the W8 with a 5-speed automatic transmission with Tiptronic self-shift mode, which feeds it through Volkswagen’s 4MOTION all-wheel-drive system, and finally to a set of 16-inch alloy wheels, wearing R-rated 215/55 all-season tires.

With so much sophistication under our right foot, we couldn’t wait to take the W8 to our track, where it promptly ran a best 0-to-60 time of a spirited, if unremarkable, 7.2 seconds. The 1/4 mile ended in 15.6 seconds at 93 miles-per-hour. Throttle response is deceptively smooth down low, with little tire-screeching torque. But the W8’s free-revving nature allows power to build very rapidly. Yet, the engine and transmission combo are so remarkably refined and well matched that it doesn’t feel like you’re traveling at real 8-cylinder speeds.

That feel carries over to the street, where the W8 shows itself to be flexible and responsive under any driving condition, whether it be tight urban traffic or wide open stretches of highway.

But price numbers are not quite as friendly. The fully equipped Passat W8 starts at $37,900, with the upcoming W8 wagon costing $38,700. Or over $16,000 more than a look alike 4-cylinder Passat. Thus, while the W8 invades BMW and Mercedes territory and all that means in competition, the Phaeton will be the real test.

So, even if the world is not quite ready for an almost 40 grand VW, the 2002 Volkswagen Passat W8 will change the public’s perception of Volkswagen. No longer just a builder of great small cars with great small engines, soon VW may simply stand for great cars!