For hard core auto enthusiasts, a sporting driving experience is not complete without a manual transmission. But with increasing traffic congestion, the joys of self-shift have diminished, making manual trannys harder to find. Fortunately, Honda’s luxury division Acura believes that any car with ‘‘sport’’ in its DNA deserves a proper gear change. Thus while their latest CL luxury sport coupe arrived without a manual, they’ve now corrected it with a new, close ratio 6-speed Type-S. So let’s stir it up.

When Acura officials set their sights on improving the 3.2 CL for 2003, two goals were clear right from the start. To enhance the styling with an aggressive look, and to increase the performance quotient of this sport-luxury coupe to match that look.

To meet the former, mostly tweaks were the order. Both the CL and new CL Type-S get a bolder grille with body color surround, and revised headlights with black accents. In the rear are slightly re-designed taillights, and new exhaust tips. There are also new 6- spoke 16 inch alloy wheels on the CL, and 17 inch on the Type-S. Nothing earthshaking. After all, we’re talking about Honda here. 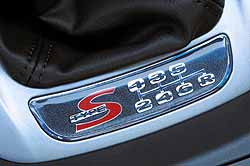 Of more interest to us was how Acura engineers met the second goal. As we mentioned earlier, unlike the four-door TL Type-S, the CL Type-S is now available with a close ratio 6- speed manual transmission. The TL’s 5-speed Sequential SportShift automatic is available for the same MSRP. And, we admit the 6-speed is not for everyone.

The shift linkage stirs fairly lightly, and with a dual mass flywheel, it’s vibration free. But the six speed’s clutch is an acquired taste. With little more than an inch of play at the bottom, it was as though the mere thought of releasing it would launch you away. Or worse, stall you where you sat. But our most determined staff discovered that, with a little patience, 60 could be reached in a scant 5.9 seconds and the quarter mile in a pretty hot 14.5 seconds at 96 MPH.

In the six speed Type-S, Acura engineers have replaced the car’s electronic Vehicle Stability Assist program with a mechanical helical limited slip differential that really hooks up. Plus two new hydraulic engine mounts counter fore-and aft engine movement under hard throttle. On the downside, there is a bit more wheel hop and torque steer present under a hard launch than with the automatic.

The CL Type-S’ beefy and finely tuned double wishbone suspension also benefits from the new limited slip differential ensuring that consistent power and traction is available for exiting turns. The result is a CL Type -S that is among the flattest and most neutral handling front drivers we’ve ever tested. The CL felt very athletic when run through our low speed slalom, and even more when pushed hard, exhibiting little more than a mild touch of understeer. The variable speed sensitive power rack and pinion steering is smooth and quick, and provides a healthy amount of feedback.

The 215/50R 17 inch Michelin MXM4 tires also help with superb grip, and on switchback roads there’s just enough body roll to keep the cars side to side transitions from feeling harsh. When cruising, the CL Type-S delivers a ride that is a near perfect balance between sport and luxury. It’s a ride and handling package that gives its more expensive German competitors a serious run for their money. Its four-wheel disc, ABS-equipped braking system, with 11 inch rotors, vented in the front, solid in the rear, delivers excellent braking performance, too. We averaged stops from 60 in 120 feet. After eight runs, brake fade was nonexistent and stability remained first rate throughout the test.

When it comes to interior comforts, you’ll be hard pressed to find any car with a longer list of standard features than the Acura CL Type- S. That includes heated perforated leather seats with 8-way power for the driver and 4-way for the passenger. The adjustable steering wheel with remote audio controls and the shift knob are also covered in hides. Then there is the Bose audio system that includes in-dash cassette and 6-disc CD changer with six speakers. And to keep you comfy no matter what the weather, a fully automatic climate control system with a micron air filtration system. In fact, the only option available is a DVD-based GPS navigation system that includes GM’s OnStar emergency locator and advisor system.

That’s not a whole lot of money when you stir in its mostly German competition. And when you add Acura’s reputation for quality and reliability, the 2003 Acura 3.2 CL Type-S is a total sport-luxury coupe value that’s tough, if not impossible, to beat.