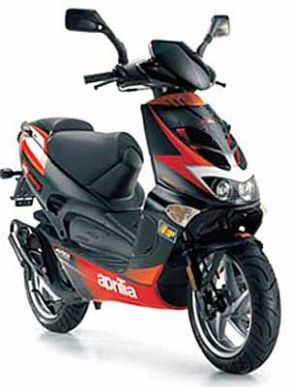 Environmentally conscious drivers are always looking for ways to save gas. And while many have invested in today’s electric hybrids, some commuters to crowded urban areas are taking the two-wheeled approach of scooters. Now, long a favorite in Europe for both work and play, these compact machines are rapidly gaining fans in the U.S. They’re lean, they’re green, and as we recently found out, they’re also a whole lot of fun! That’s because scooters have come a long way from the slow, smoky little oil-burners of the 1960s.

‘‘Today’s scooters are much more modern with fuel injection and disc brakes. The onboard computers make them much more advanced for diagnostic purposes, and they’re quite amazing for their fuel economy.’‘Mark Jurus

And Mark Jurus would know. He’s owned and operated our favorite Baltimore area scooter shop, Moto Strada, since 1995. During that time, he’s sold and serviced many different brands of scooters, from vintage to modern, and seen real changes in how Americans view the motor scooter.

‘‘In Europe, motor scooters have often been used for everyday transportation. And what we’re seeing now is a lot of our customers are coming into our shop who originally used to think of the motor scooter as a recreational vehicle and now as a viable machine for everyday applications.’‘Mark Jurus

These days, Moto Strada’s most modern line comes from Italy’s Aprilia, a manufacturer that offers scooter buyers an impressive range of choices.

At one end of the line are ultra-compact machines like the SR 50 DITECH. Like traditional scooters, the SR 50 is powered by a 50cc single-cylinder two-stroke engine. But that’s where tradition ends, because the engine is liquid cooled, and utilizes cutting edge computer controlled direct fuel injection. This not only delivers an output of 7-horsepower, powerful for a tiny 50cc, but reduces fuel consumption by 50-percent, and exhaust emissions by 80-percent! And thanks to an electric starter and twist-and-go automatic transmission, allows our featherweight 196-pound SR to skip briskly through traffic, while delivering an average 112 miles-per-gallon fuel economy. Though its maximum speed of 52 miles-per-hour, and the fact that long hills do tax the tiny engine’s acceleration ability, means that you’d best stay off the highway.

As an urban commuter, the SR 50 impresses us with its maneuverability in tight parking lots, the ride quality of its telescopic front and single-shock rear suspension, and the stopping ability of its front and rear disc brakes, an important safety feature in today’s fast moving urban environment. While its diminutive size and weight makes parking in even the most congested areas a breeze.

Buying is a breeze as well, thanks to a price of $2,799. A lot less than you’d pay for a full size motorcycle or a decent used car, and it’s a lot of fun. 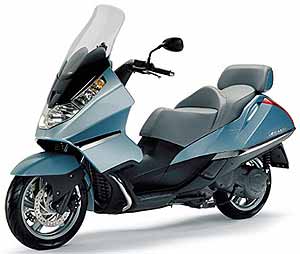 But, if you think you can handle a scooter that is closer to a full size motorcycle, step through the Aprilia’s flagship scooter, the Atlantic 500. Huge by scooter standards, the Atlantic 500 is 88.6-inches long, rides on a 61-inch wheelbase, and weighs 425 pounds. It’s powered by a green-friendly 4-stroke 460cc single-overhead-cam 4-valve single- cylinder engine that makes 39 horsepower. And like the SR 50, delivers that power through a super-smooth automatic gearbox. Size, weight and power mean that a maxi-scooter like the Atlantic can tackle high-speed highway traffic with ease. Our test bike handled the Baltimore beltway, where speeds sometimes average 75 miles-per-hour, with power to spare

Large 60mm telescopic forks up front and a twin shock rear deliver a plush ride that rivals most full size motorcycles, while a trio of disc brakes with 2-piston calipers delivers full- size stopping power. But despite the big power boost over the SR 50, the Atlantic 500 still delivered an average fuel mileage of 60 miles-per-gallon.

Highway prowess notwithstanding, the superbly balanced Atlantic also proved to be equally at home in the crowded conditions of the scooter’s traditional urban playground. Weather protection is provided by a large fairing, with sharp, angular styling, while comfort is covered by a wide, well padded seat, which lifts up to reveal a big 1.7 cubic foot luggage compartment.

So the next time you pass a scooter shop like Moto Strada, stop in and take a look at today’s modern scooters, like our Aprilia duet. Scooters are more capable, sophisticated and environmentally friendly than ever before, and offer more style, fun, and economy than machines many times their size.