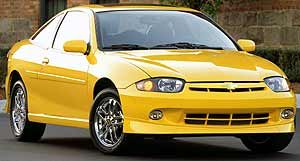 Drive down any road in America, and you’re sure to see a Chevy Cavalier. Since its introduction in 1982, over 4 million of this copious compact have been sold. While its last major redesign was in 1995, Chevy has continued to bolster its smallest car to face ever mounting foreign and domestic competition. And, for 2003, the Cavalier gets even more upgrades. But after 21 years, can the smallest bow tie still keep up?

Well, it certainly is giving it the old college try. The 2003 Chevrolet Cavalier dons sporty new styling features to help keep it looking current. Chief among them is a more angular body- color front fascia that can house better integrated fog lamps. Arched headlight housings are most contemporary, as is the more muscular hood. Rocker moldings are also more pronounced, with a rear fascia and tail light facelift as well. Our LS Sport also adds a standard flipper rear spoiler and 16-inch chrome wheels.

Front drive motivation is from GM’s Ecotec 2.2-liter dual-overhead-cam 16-valve 4- cylinder. The Ecotec, with 140 horsepower and 150 pound-feet of torque, was introduced last year in the LS Sport. For 2003 it’s the standard powerplant across the Cavalier line. It’s linked to either a standard 5-speed manual transmission, or an optional Hydramatic 4-speed automatic.

Drop the clutch, and our Cavalier manual sprints to 60 in 7.9 seconds, and through the 1/4 mile in 16.1 seconds at 81 miles-per-hour. Only a few tenths slower than the Honda Civic Si! But while the engine is strong, it’s also noisy, especially at high rpm. The manual shifter is also stiff and vague, making it hard to row rapidly through the gears.

In our handling test, the Cavalier exhibits a tendency to push hard on the entrance, and then start to oversteer rather abruptly in mid-corner. The power rack-and-pinion steering is quick, but lacks feel. Body roll is quite evident, despite the LS Sport’s FE2 suspension package that includes thicker 24-millimeter stabilizer bars. So Cavalier may be in the same speed league as a Civic, but its age shows when the road turns.

But when the road ends, our Cavalier LS Sport used its standard ABS-equipped 4-wheel discs to stop from 60 in a slightly long 136 feet. ABS is no longer standard on the base Cavalier. The brake pedal requires a hefty push for maximum deceleration and exhibits very strong ABS pulse, but stopping is straight and stable. 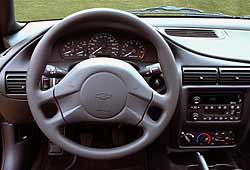 The Cavalier also shows its age in daily driving. Ride quality is choppy, and there’s a lot of road noise. But you’ll hear it from a cabin that is cleaner and better equipped than before. It remains one of the most spacious of compacts , another reason it sells so well. The dash exhibits the well-thought-out ergonomics that GM products are rightly praised for, and the seats can now be equipped with optional side impact airbags. For music lovers, the Cavalier offers XM satellite radio as an option. While parents get standard LATCH-system child safety seat anchors in the rear seat. Cargo space is 13.2 cubic-feet for coupes, 13.6 cubic-feet for sedans, or about normal for the compact class.

As are sticker prices. The base Cavalier start at $14,595. LS pricing begins at $16,095. While the LS Sport carries a base price of $17,395. That same money will put you in a more sophisticated Honda Civic or Toyota Corolla, and even a Honda Accord. However, incentives can cut thousands off the sticker making Cavalier a solid class bargain. That’s why you see so many of them, with over 238,000 built last year alone.

The Cavalier is solid, reliable transportation. Hardly cutting edge, but with a sportier look, airier interior, and more power than many of its more sophisticated competitors. And, for now, despite its age, it is managing to keep up an impressive sales rate. But, this small Chevy is clearly overdue for a total mechanical redesign. And it will need one soon or styling, room, and price won’t be enough for it to keep pace much longer.