You know something? Trucks and convertible tops don’t usually go together. Now, there have been a few custom conversions over the years. And Dodge even sold a soft top version of their Dakota pickup in 1990. But rarely do pickup buyers get to feel the wind in their hair. That could be changing, however, with the debut of Chevrolet’s new SSR. But the SSR is much more than just a topless truck.

The 2003 Chevrolet SSR is not only a drop top with a cargo bed, it’s also a stylish boulevard cruiser, and a turn-key performance truck. But the first impression is all about head-turning style. The limited-production Super Sport Roadster’s eye-catching lines, staying remarkably true to the original ‘‘street rodder’’ concept shown at Detroit’s 2000 auto show, are equal parts 50’s era pickup and California custom.

Super fat front fenders containing 19-inch alloy wheels with 255/45 Goodyear tires, bulge out from a plunging, wedge-shaped hood. While in the rear, the sporty cargo box is flanked by even fatter fenders, needed for the wider 295/40 rubber mounted on 20-inch rims. But the slickest exterior feature, and the core of the SSR’s appeal, is the power folding hardtop. Just press the switch on the center console, and the two roof sections retract into a compact vertical storage bay. The designers at ASC did a marvelous job of both engineering and packaging. And this transforms the SSR from a funky pickup into an open air custom cruiser.

But high style frequently means low utility, and like classic El Caminos, the new SSR is clearly more for show. Raise the standard hard tonneau cover to access a shallow, if well appointed, cargo bed. With the optional carpeted bed liner, however, it’s better suited to golf bags than bags of mulch.

But what the SSR may lack in utility, it makes up for with street smarts. The engine is a new version of Chevy’s 5.3-liter small-block V8. This all-aluminum pushrod, GM’s first all alloy truck V-8, pumps 300 horsepower and 331 pound-feet of torque to the rear wheels, by way of a 4-speed automatic transmission.

It all rides on a shortened, reinforced version of the Trailblazer EXT’s hydroformed steel perimeter frame, which is supported by a firm double A-arm suspension up front and a 5-link rear with a solid axle, also derived from the EXT-ute. This chassis and suspension give the SSR cornering capabilities way beyond those of a typical pickup, and more in line with Ford’s SVT F-150 Lightning effort. Turn in is quick, and front plow mild. Body roll is minimal, and feedback from the suspension and tires first rate. But, the hydraulic rack-and-pinion steering transmits every bump and ripple through the steering column, yet also delivers plenty of feel.

Straight line performance isn’t quite as impressive as we expected, however, with the SSR hitting 60 in a best time of 7.9 seconds. The quarter mile takes 16-seconds, at 87 miles-per-hour. Given the SSR’s 4,760 pound weight, the concepts 6.0-liter would have fared better, or how about a Corvette V8? The 5.3 does however deliver a flat, consistent power band, and plays its showoff part with a deep rumbling exhaust note.

Stopping the SSR are 4-wheel disc brakes with standard ABS, which brought it down from 60 in a good average distance of 132 feet. Stops were straight and stable, despite a long, vague pedal travel.

On public roads, the SSR delivers a pretty comfortable ride, despite a fair bit of cowl shake. The drivetrain is responsive and flexible, even in heavy traffic. 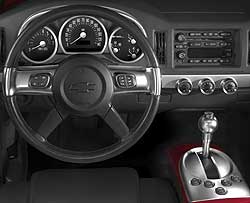 The SSR’s exterior is matched by a slick, if snug, cockpit that’s both custom stylish and Chevy efficient. Brushed and body color trim provide a nice contrast to the dark grey dash and doors, while twin well-padded leather clad power buckets provide good long distance ride comfort. The main gauge cluster is clipped, chrome-ringed, and clear. These optional auxiliary gauges are tucked under the dash, and they’re much harder to scan in an instant. Controls for the AM/FM/CD audio system are typical GM, large, clear and easy to use, as are the simple 3-dial climate controls. In addition to the gauges and bed liner, SSR options include bolt-on running boards and lockable side-saddle storage bags.

Now, SSR pricing starts at $41,995, before options and the inevitable dealer markup. Not a cheap toy at all, but this is a limited run hardtop convertible. And we bet enough bow-tie faithful will quickly step up to this image-conscience hardware to sell out this year’s 3,500 unit run. Plus, it’s great to see the world’s largest car company doing something daring and out of character.

You know, pickup and fun are words seldom used in the same sentence. Add street rodder style and convertible, and it’s too rare of an occurrence to count. But in the 2003 Chevrolet Super Sport Roadster, they all come together to indeed produce much more than a topless pickup truck, and one of the most entertaining rides of the year.