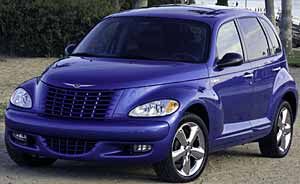 In the summer of 2000, Chrysler’s anxiously awaited PT Cruiser began rolling off the assembly line and on to showroom floors. Since then, sales of the retro 5-door have been brisk, as Chrysler has kept the PT buzz going with chopped and channeled auto show concepts and ever more creative trim. But what the PT Cruiser needs for long term success is power to match its street rod looks. Well, the PT Turbo has arrived.

And after being titillated by rumors, followed by sightings of the turbocharged GT Cruiser Concept that graced the auto show circuit several years ago, we say it’s about time! And the arrival of the new 2003 Chrysler PT Turbo now brings the total number of available and soon to be available members of the PT Cruiser family up to five. As the PT Turbo joins the current Flame, the Woodie, and the Dream Cruiser Series 1 models, as well as the recently announced PT Cruiser Convertible.

And, at the recent Paris Auto Show, Chrysler gave us a hint at the direction that the second generation PT Cruiser might be headed when they unveiled this chopped top California Cruiser concept.

But enough about the future. With a short two weeks of PT Turbo cruisin’ in front of us, our first order of business was to hustle the PT Turbo to the track to check out its departure , from the starting line, that is. And we weren’t disappointed. Our AutoStick automatic PT Turbo hit 60 in a brisk 6.7 seconds, and then spanked the quarter mile in 15.3 seconds at 92 MPH! That bettered the original PT’s rather leisurely 0-60 by 2 , seconds, with a 1 , second quicker quarter mile. Equally impressive is the lack of turbo lag on launch. Just nail the throttle and the PT Turbo leaps off the line with a smooth and linear increase in power as it pulls to the redline. In fact, 90 percent of the peak torque is available from 2300 to 5000 rpm.

Traction control is included on the PT Turbo’s standard equipment list, and we were pleased to find that it allowed a fair amount of wheel spin before engaging, unlike many systems that clamp down on any attempt at forward progress almost immediately when the wheels break free.

Providing the PT Turbo’s punch is a High Output 2.4 liter, twin cam 16-valve I-4 that, with the turbo boost, puts out 215 horsepower and 245 pound-feet of torque. Pretty sweet numbers for this little PT. But there’s more good news. This isn’t just a standard PT engine with a turbo bolted on. In the interest of reliability, the engine block assembly, cylinder head, and crankshaft have been redesigned to handle the engine’s higher output. Pistons are cooled with racing-style oilers, and the oil lubrication and water cooling systems of the turbo were designed for maximum durability. A performance tuned exhaust system is also part of the turbo package. A heavy-duty Getrag 5-speed manual transmission is the standard offering, while the 4-speed AutoStick automatic, like our tester’s, is optional. This is the first time the manual-mode AutoStick has been available on the PT.

The PT Turbo maintains the use of the MacPherson strut front, twist beam rear axle with Watt’s linkage suspension that’s found on other PTs in the line. But, while the PT Turbo’s setup has been ‘‘performance-tuned’’ with stiffer springs and softer shocks, it’s still no autocross monster. Understeer and body roll are abundant, and with minimal feedback from the rack and pinion steering, you never really feel connected to the road. That said, the handling is very consistent. No matter how lightly or aggressively you enter a corner, the PT Turbo responds in the same predictable manner.

And predictable is also a good way to describe the PT Turbo’s braking performance. With the standard four-wheel disc ABS braking system at our command, we averaged stops from 60 in good 125 feet. Pedal feel is rather soft, but there was no fade or locking during our tests, and despite a fair amount of nose dive, stability was good.

Stylistically, there is very little difference in the PT Turbo and its stable mates. The new body color monotone front fascia includes a large lower grille for improved cooling, and the rear fascia, done in the same monotone motif, has a larger exhaust opening. The PT Turbo also comes with standard 17 inch rims and rubber. Our GT came with the available chrome rims that would fit any sharp street rod.

The same goes for our car’s well bolstered and quite comfortable performance seats. They’re trimmed in optional leather with a power seat height adjustment. Heated surfaces are also available. The deeply recessed gauges get a unique silver facing with a 140 mph speedo. Other available interior touches include side impact airbags, power moonroof, and a CD/cassette audio system as well as a 6-disc in-dash CD changer.

When it comes to dollars and sense, the base price of PT Turbo admission is $22,880. With options, our tester totaled $25,900. Now that puts the PT Turbo in with some pretty stiff competitors. But even many of its V-6 powered classmates can’t get you to 60 in under 7 seconds. And they can’t match the 2003 PT Turbo’s retro-styling and versatility either. And while those two things alone go a long way towards making the PT Turbo desirable today, for the long term, a little extra ‘‘boost’’ never hurts!