Hybrid electric vehicles, ones that use both gasoline and electric power to save fuel, are to many the future of the automobile. But so far, the few hybrids available, while fuel efficient, have been too small to be practical as family cars. But that was before Honda introduced the 2003 Civic Hybrid. Now it looks like any other Civic sedan that so many of us know and love. But does it deliver both high mileage and the spacious accommodations needed to lure families into the fuel efficient future?

Well, if you’re a family driver already happy with your Civic, you’ll be happy to learn that the 2003 Honda Civic Hybrid is almost indistinguishable from the gasoline-only Civic. Other than a unique grille and bumper facia, lightweight wheels, and rear taillights, it’s the same handsome, if conservative, body, riding on a 103.1-inch wheelbase, as the standard Civic.

The clean, fully equipped interior offers the same generous 91.4 cubic-feet of passenger volume and differs from other Civics partly in its digital/analog gauge cluster, which displays not only fuel, but battery power levels, the hybrid powerplant’s operating status, and fuel economy estimators to let you know you really are saving money. Another difference is the automatic climate control, not available in other Civics.

The rear seat delivers the same healthy head and leg room as other Civic sedans. So, growing families are welcomed. But here fuel economy is traded for versatility since the seat back does not fold. That’s because between the rear seat and the trunk is the Intelligent Power Unit, which consists of the power control unit, the nickel-metal hydride batteries, and a compact cooling system. This means less trunk space as well, 10.1 cubic feet compared to 12.9 for the regular sedan. That’s smaller than Toyota’s tiny hybrid Prius. 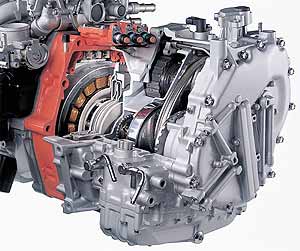 Honda calls its hybrid power train IMA, for Integrated Motor Assist. This is a second generation system that is more powerful and capable than the one in the Insight. Primary power is a 1.3-liter, single overhead cam, inline-4 gas engine with VTEC variable-valve-timing. Ratings are 85 horsepower and 87 pound-feet of torque. To achieve optimum fuel combustion, each of the engine’s lean-burn high-compression cylinders is equipped with twin spark plugs. They’re controlled by Honda’s Sequential Ignition Control, which ignites the plugs together, or in sequence, depending on power needs For acceleration or climbing hills, extra power is provided by the IMA’s compact DC brushless electric motor with a 10-kilowatt/13-horsepower/46 pound-feet of torque output. This is sandwiched between the engine and transmission, which is either our test car’s 5- speed manual, or a CVT-continuously-variable automatic.

In normal driving, unless you monitor the gauges, you’ll never know when you’re only using gasoline power or the combination of gas and electric. Operation is seamless. When coasting in gear or braking, the electric motor becomes a generator and recharges the battery pack. When you finally put your foot down on the gas pedal, it takes a leisurely 12.1 seconds to go from 0 to 60 miles-per-hour and the 1/4 mile passes at 18.9 seconds at 74 miles-per-hour.

For many, the Civic Hybrid may demand a different driving technique. You have to slip the clutch and rev it harder for a brisk takeoff. In traffic you have to shift more often, and sometimes downshift up long grades to keep up momentum. But, while the Civic Hybrid does struggle a bit under a heavy load, it doesn’t feel unusually sluggish for an economy car. And many tight corners, taken in third gear in a conventional car, now require a downshift to second or even first. It’s not hard to master, however. In fact, our staff found that just after a few hours of driving, the Civic Hybrid technique becomes second nature. And we didn’t even mind that the system shuts itself down when you stop.

In fact, other than the drivetrain, the Civic Hybrid offers the same friendly, forgiving handling, smooth ride, and feeling of refinement as the standard Civic sedan. Plus much better gas mileage! EPA fuel mileage estimates are 46 city/51 highway for the manual transmission, 47 city/48 highway for the automatic. In our usual mix of city and highway driving, this Civic Hybrid manual averaged 45 miles-per-gallon.

But you will pay more for better mileage. The Honda Civic Hybrid carries a base price of $19,990 for the manual model, and $20,990 for the CVT automatic. But there are no options. And the Civic Hybrid is eligible for a federal tax deduction of $2,000 as a “clean fuel” vehicle.

The 2003 Honda Civic Hybrid is both the most advanced and most conventional, plus the roomiest hybrid vehicle yet available. It’s also in Honda-style, extremely well thought out. Reasons enough, we think, to lure even the most skeptical American families into a new high mileage future.