Ford motor company has many important new products coming out in the next few years, but none is more important than the all-new 2003 Expedition SUV. Now like the original 1997 Expedition, this new one offers full-size comfort and utility in an urban-friendly package. And it looks a lot like the original, as well. So what makes it so important? Well for that, we have to look a little deeper.

That’s because the new 2003 Ford Expedition has changed where it counts the most, under the skin. Though with its smoother lines, this slightly longer, taller, wider version of Ford’s top-selling full-size SUV is a handsome, solid-looking machine.

And rides on a solid chassis, as well! The all-new box-section, hydro-formed frame is 70- percent stiffer than before. And that rides on the first fully independent rear suspension on a full- size SUV. Similar to Explorer in concept, the new double-wishbone IRS is available with either coil or air springs with four corner load leveling. It not only delivers better ride and handling, but better body control under heavy loads. To that end, the trailer tow limit rises to class best at 8,900 pounds, with a higher maximum payload of 1,614 pounds.

Like the rear, the double-wishbone independent front suspension is also aluminum intensive, and tuned to significantly reduce the lateral movements that upset a large vehicle’s handling. This gives the Expedition a very tight, sure-footed feel that we don’t normally encounter in a body-on-frame truck weighing almost 5,700 pounds. Indeed in our slalom exercise the Expedition responded less like a truck, with more of that taut feel typical of car-based SUVs with unitized chassis. Body control is excellent, with modest roll. Turn-ins are quick thanks to the new rack- and-pinion steering with good feedback and a light feel.

Big SUVs will never be sports cars, or cars at all, but the ‘03 Expedition is impressive in corners. To get from corner to corner, the Expedition is equipped with a choice of carryover, if quieter, V-8s. The standard 4.6-liter V8 does gain 17 horsepower for a total of 232, with 291 pound-feet of torque. Top dog in our Eddie Bauer is the 5.4-liter Triton V8 with 260 horsepower and 350 pound-feet of torque. Enough for respectable 0 to 60 runs of 9.7 seconds.

Both engines are mated to a 4-speed automatic transmission, which feeds power to a more responsive, available ControlTrac, 2-speed, on-demand 4-wheel-drive system. Add nearly an inch and a half more ground clearance, and the optional AdvanceTrac electronic traction and stability system, and you have a big SUV that delivers tenacious traction for any surface and weather.

To stop it all the Expedition continues with 4-wheel ABS disc brakes. New is Brake Assist that compensates for drivers that may not use ABS properly. Our Expedition stopped from 60 in a good average distance of 140 feet with far less nose dive than before.

Inside, the new Expedition has also been heavily refined, taking on a bit of a European flair with a correct, friendly interior style that shares little with its utilitarian pickup relatives. And packs all the safety and security features of an import luxury sedan, including dual stage front airbags and Safety Canopy curtain airbags to protect heads in both side impact and rollovers. A navigation system is a first time option. A very clever feature is the first power-fold third seat. Plus, when upright, it has an amazing 9 inches more leg room than before.

The Expedition also provides 20.2 cubic-feet of cargo space behind that third seat, 38.7 behind the second seat, and a maximum of 110.4 cubic feet when all the seats are folded. 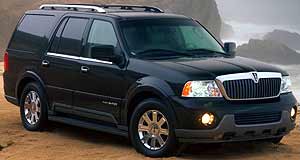 Now if you want something even more complete, check out the Expedition’s upscale sibling, the 2003 Lincoln Navigator. In addition to all of the Expedition’s new features, and a flashier exterior, the Navigator offers first time SUV features like a power tailgate and power- retracting running boards, plus power folding side mirrors and standard air suspension. Navigator’s more potent twin-cam 5.4-liter V8 churns out 300 horsepower and 355 pound-feet of torque. All for a price that starts at $48,775.

Now that makes the Ford Expedition look like an absolute bargain. Indeed, when you factor in an exceptional new chassis, strong-refined V8, top-notch four-wheel drive system, and a roomy, very safe, and clever interior, the 2003 Ford Expedition raises the bar for full-size SUVs to a dizzying new height. So, while it may not look a lot different than before, Ford’s most important new vehicle this year proves that you can’t judge a book, or a full-size SUV, by its cover.