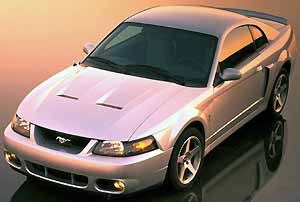 No other modern Ford Mustang has a more storied history than the SVT Cobra. Since 1993, each new Cobra has managed to raise the performance bar of the Mustang seasoned chassis until it seemed as if the bar could not possibly go higher. But if there’s one thing that we’ve learned over the years, it never pays to underestimate the ingenuity of SVT.

Not only are the 2003 Ford Mustang SVT Cobra’s fangs sharper, the venom is more potent too! Thanks to the SVT snake handlers, this Cobra is the most powerful reptile ever to escape Ford of Dearborn. Due mainly to the Roots-type Eaton supercharger, water-to-air intercooler, and new freer-breathing 32-valve alloy heads bolted to a 4.6- liter V8 iron block derived from the SVT F150 Lightning.

That forced feeding boosts the snarly-sounding Cobra’s striking power to 390 horsepower and 390 pound-feet of torque, an increase of 70 horsepower and 78 pound-feet over the previous Cobra. And, Cobra fans, it really feels like it’s true this time. All that power is sent along this snake’s belly via a Tremec T-56 six-speed manual transmission and aluminum drive shaft to the 3.55:1 limited slip rear axle.

Spin up the engine and drop the stiff 11-inch clutch, and hole shots to 60 in just 5.1 seconds can become a routine part of your daily drive. So too a quarter mile of 13.4 seconds at 108 mph. But with peak torque at just 3,500 rpm, it can be tricky to launch without excessive wheel spin. And the rev limiter cuts you off shy of the 6500 rpm redline. But with a little practice, consistent performance is yours.

And consistent performance, with more than a dash of endurance, is a term that applies to the Cobra’s brakes, too. We averaged stops from 60 in 127 feet, a number that kept repeating time after time during our 8 run test. The Cobra is equipped with 13 inch vented Brembo discs up front, 11.6 inch in the rear, mounted inside larger-for-this-year 17x9 inch wheels wrapped with 275/40-series Z rated rubber. And both brakes and tires got a serious workout when we got the chance to put the new Cobra through its paces in the smooth and demanding confines of Virginia International Raceway.

This the second Cobra we’ve tested with the long awaited multi-link independent rear suspension. But, we were not impressed with the 2001 effort. While bump steer was cured, the overall feel was too soft with too much roll and too little predictability. This time SVT has done a much better balancing act, and at track speeds the dated Fox chassis is now a heap of fun. The big Brembos and linear steering allow you to dive deep into corners, keeping lap speeds up without sweaty palms. There’s gobs of power to push you through most tricky corners, turning the greatly reduced understeer into power-on oversteer on demand.

A complete IRS retune is obvious. Besides a new cross brace on the rear subframe, spring, bushings, and geometry are all changed, with Bilstein monotube gas shocks at the corners. Granted, the track capabilities of the ‘03 SVT Cobra still trail tuner Mustangs from Roush, Saleen, and Kenny Brown. But, taking advantage of the greater wheel travel of the IRS, this SVT is downright refined when driving on speed-controlled, pot-marked highways.

Indeed, track or street, the new Cobra is eye-catching hardware. The Cobra’s new look includes a cleaner yet more aggressive front fascia, a new composite hood with functional air scoops. Down the sides the rocker panels have been reshaped and the fender scoops have been reworked to match the hood, while in the rear the composite deck lid carries an integrated spoiler.

Inside, new touches include bucket seats with Nudo Leather trim with suede inserts. The driver’s power seat gets new power adjustable thigh and side bolsters, and a power lumbar support. The new gauge cluster now includes a boost gauge and electro-luminescent lighting.

And, when it comes to punch-for-the-price, the new SVT Cobra knocks tuner Mustang competitors out cold. The SVT Cobra coupe zooms away for $34,750; the convertible lists at $38,995.

With an all-new Mustang chassis within sight, it’s likely that this is the last SVT effort on the current car. And, we’re pleased to say, it’s going out on a high note. With its now truly venomous powerplant, well balanced handling, ride, and braking, aggressive looks and more comfortable cockpit, the 2003 Ford SVT Mustang Cobra is one snake we don’t mind getting bitten by. In fact, if there’s an anti-venom available for this snake, we don’t even want to know about it.