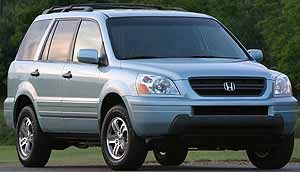 For all its engineering prowess, Honda is a very conservative company. While others rush to produce vehicles for each new market, Honda prefers to watch and wait, and then introduce designs that leap past the competition. Designs like the superb Odyssey minivan and the Acura MDX luxury sport-ute. While late bloomers, they are huge hits with consumers. Well their latest- late arrival is this 2003 Honda Pilot, the first Honda designed mid-size SUV. So is this another case of the last being best?

Well, after living with the 2003 Honda Pilot for two weeks, we can confidently say that the Pilot will give top selling mid-size family SUVs a serious challenge for the most discriminating buyers. And with the loyal following of stalwarts like Explorer, Grand Cherokee, and TrailBlazer in its path, that’s no easy task. But that’s one of the beauties of the new Pilot. It makes all those chores that make an SUV so necessary, seem so easy.

One reason for that is the Pilot comes from good stock, as nearly 70 percent of its parts are shared with Acura’s luxury SUV, the MDX, which in turn is based on the popular Odyssey minivan. But the Pilot’s styling is distinctly Honda, looking like a grown up CR-V. Compared to the volume leader Explorer, the Pilot is only 1, inches shorter. But the wheelbase, at 106.3 inches, is a surprising 7 inches less.

On the other hand, being based on the MDX means the Pilot is wide, 5 inches wider than Explorer, not including mirrors, and nearly 6 inches wider in track. While that makes the Pilot a tighter fit for many garages, it bodes well for rollover and cornering stability. Indeed our low speed slalom confirms it’s easy to handle. The Pilot is very stable and controllable. Like most SUVs, there is a lot of understeer on turn in. But at mid-corner it transitions gently to mild oversteer. The rack and pinion steering is somewhat slow, with a moderate amount of feedback.

On the highway the Pilot’s MacPherson strut front, multi-link rear suspension with trailing arms, delivers a soft ride, but with a jiggle that makes you swear there is a real frame underneath. But, boy is it quiet. Something else it shares with the MDX. So the Pilot is also easy on the ears.

Engine selection is also easy. There is only one. The MDX’s 3.5 liter, SOHC 24-valve, VTEC V-6 with 240 horsepower and 242 pound-feet of torque. Same for the rest of the driveline. The 5-speed automatic includes Honda’s Grade Logic control technology. It’s coupled to a state-of-the-art Variable-Torque Management four wheel drive system.

With the VTM-4 system, the Pilot runs primarily in front-wheel drive on dry pavement. But while some rival systems wait for wheel slippage to be detected before moving torque to the rear wheels, VTM-4 anticipates that torque will be needed at the rear whenever the Pilot is under acceleration. Up to 50% of the torque can be available at the rear in low gear. And while there is no low range, a driver actuated locking mode splits and holds torque evenly for extremely slippery conditions. It works only in first, second and reverse gears, and automatically disengages at speeds above 18 MPH. But, coupled with 8 inches of ground clearance, there won’t be too many places you can’t get to in a Pilot.

So with plenty of four-wheel traction at our disposal on launch, we were able to accelerate the Pilot to 60 in 7.8 seconds, and on through the quarter mile in 16.1 seconds at 86 MPH. Despite not being a V-8, there is plenty of oomph off the line, with a solid mid-range. The five speed automatic delivers smooth yet positive shifts.

Pilot’s braking comes by way of 4-wheel discs with ABS and Electronic Brake Distribution. We averaged stops from 60 in a longish 136 feet. Our drivers note the Pilot has a rather soft pedal feel that transmits plenty of pulse and vibration when the ABS kicks in. There’s also a fair amount of nose dive, but nothing that hampers stability.

So far, so easy. But life really gets easy when you slip inside the new Pilot where you’ll find plenty of stylish room and seating for 8. And, with two trim levels, LX and EX, the Pilot’s interior offers nearly all the comforts of home, and then some. Our EX has the available leather trimmed buckets with 8-way power adjustments for the driver. Front seats also get side impact airbags. But it’s in the center stack where it really gets easy. At the top of the stack in our tester were the controls for the audio system, which includes cassette and CD players. There you’ll also find the controls for the optional, and highly desirable, DVD entertainment system, and the screen flips down from the ceiling just behind the front seats. An optional nav system can be had in place of the DVD set up. 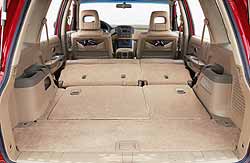 Second row passengers ride in true comfort. With the Pilot’s wide body, three across seating is actually quite comfortable for the long haul. At the rear of the center console, second row patrons will find their own climate controls, headphone jacks, and A/V plugs for video game systems. And with stadium style seating, and the available infrared headphones, third row passengers can also see and hear the movie, or watch the great outdoors. But although there are shoulder belts for three, third row seating has less leg room and is harder to get to than the Ford Explorer. If you’re traveling without human cargo, you can fold both rows of seats flat for a class leading 90.3 cubic feet of cargo space. There’s also room between the wheel wells for that ever necessary 4X8 sheet of plywood. That’s easy too.

So, is the last really best? While it does nothing other SUVs don’t, the Pilot does it so easily. That makes it one of our top picks for family SUVs. The only thing that’s really not likely to be easy is getting a Pilot. With its great powertrain, cavernous interior, and a host of useful and entertaining amenities, it’s a guaranteed sellout. But if do you snag a 2003 Honda Pilot, you’ll find this family SUV makes it oh so easy on you.