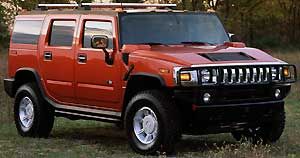 It was 1992 that AM General rolled the first civilian version of the army’s Humvee special purpose vehicle off an Indiana assembly line and officially dubbed it the Hummer. The Hummer quickly developed a cult following with celebrities and off-road fanatics. And it achieved such celebrity status itself that in 1999 GM bought the Hummer brand and announced their intentions to build a more family-friendly Hummer, the H2. Well, the H2 has arrived. But the question is, is the son of Hummer as tough as daddy?

To answer that question, first we have to set some parameters for ‘‘toughness.’’ For instance, unlike the military Humvee its appearance favors, the new 2003 Hummer H2 is not available with armor plate or machine gun mounts. But when it comes to taking on nature’s worst, Hummer engineers claim the new H2, which is actually based on GM’s full size truck chassis, can handle 80 percent of the abuse of the original H1. And with 10 inches of ground clearance, a wide and stable 69.4 inch track, and a rugged full-time 4-wheel drive system with five operating modes, we don’t doubt them one bit.

That 4-by-4 unit is a Borg-Warner two-speed electronically controlled, full-time transfer case with a 40 percent front, 60 percent rear torque split when running in ‘‘4 HI Open’’ range. When in ‘‘4 HI Locked’’ or ‘‘4 LO Locked’’ modes, the Hummer H2’s standard electronic Traction Control System can be recalibrated to allow for more wheel spin by engaging the TC2 switch.

The standard ABS 4-wheel disc brakes have also been engineered with the Hummer’s penchant for extreme conditions in mind. Separate logic control schemes are used so the ABS system can discern and react to varying road conditions. At our more benign test track, the Hummer H2 was reigned in from 60 in an average of 150 feet. Stability is excellent, but after several runs, brake fade was quite noticeable.

While the H1 sees diesel duty, the new Hummer H2 is powered by GM’s Vortec 6000 6.0 liter gas V8. Output is 316 horsepower and 360 pound-feet of torque. The Vortec is mated to a manly heavy duty four-speed electronic transmission. This stout combination gives the H2 a 7,000 pound trailer tow capacity.

At the track, however, we weren’t too optimistic about the H2’s acceleration prowess. But this 6,400 pound brute surprised us with a fairly strong run to 60 in 9.7 seconds and a, ahem, sprint through the quarter mile trap in 17.3 seconds with a speed of 81 mph.

Another surprise was the H2’s highway ride. In terms of comfort, it’s right on par with the GMC Yukon Denali. Absorbing all the nasty stuff, so you don’t have to, is an independent front torsion bar suspension with 46 mm monotube gas shocks and a 36 mm tubular stabilizer bar. In the rear, our tester came with the standard rigid axle 5-link coil spring set up that features dual stage variable rate coil springs, 46mm gas shocks, and a 30 mm stabilizer bar. Order up the optional off-road suspension package, and you get a self-leveling air spring suspension.

A trip through our low speed slalom delivered predictable results from a heavy 79.2 inch tall sport-ute shod with massive 315/70 series tires on 17 inch rims. It ain’t light on its feet! But steering feel from the variable ratio, recirculating ball steering unit is light and progressive with a good deal of feedback.

And a good deal of positive feedback was accorded the Hummer H2’s surprisingly plush, trendy, and quiet interior from our staff. Our tester’s 8-way power seats came clothed in optional leather with heat. The driver faces a leather wrapped tilt wheel with satellite audio controls that front a full set of bright, overlapping gauges. The H2’s center stack houses a selection of Bose audio systems. Ours came with a 6-disc in-dash CD changer, and there’s dual zone climate controls.

Rear passengers also get heated seats, but leg room is tight for a vehicle with a generous 122.8 inch wheelbase. Optional is a single, folding third row seat, right next to a full-size spare tire. With third seat removed and second row folded, there is a generous 86.6 cubic feet of cargo space. But, for many the H2 will be more about posing, than payload.

And for the H2’s targeted audience, price won’t be an issue either. Base sticker on the 2003 Hummer H2 is $48,800. With the Chrome Appearance Package, our tester rang up to $52,870. That’s about the same as a modestly equipped Lincoln Navigator or Toyota Land Cruiser.

So, to answer our original question, is the new Hummer H2 as tough as daddy? Well, we think it’s darn close. And it certainly looks like family. In fact, most casual observers can’t tell the difference. And it’s way more comfortable and versatile than the original. So when it’s all said and done, we can safely say the 2003 Hummer H2 is a great new chip off the old block!