SUVs are the hot ticket these days, but not everyone wants one that’s the size of a freightliner. For those folks, Land Rover offers the compact Freelander. But Freelander is more than just a space efficient SUV from a legendary off-road brand. In this new 3-door form, it’s both a sport-ute and a convertible. So, on road, off road, and now open air. That sounds like a hot ticket!

The 3-door 2003 Land Rover Freelander SE3 may be new to American drivers, but the Freelander itself is no rookie. The original 5-door Freelander was introduced in Europe in 1997, and arrived in the U.S. last year.

Land Rover has been a pioneer in civilized off-roading for over 50 years. And with 23,000 Freelanders already on North American roads, this compact entry is successfully extending the popularity of its more safari-suited sport-ute siblings to younger buyers. The Freelander can be viewed as Land Rover’s answer to the Honda CRV. Sporting the same 101-inch wheelbase and other exterior dimensions as the 5-door, the 3-door SE3’s size is right on track for its class.

However, the stout, muscular styling of this sport-ute, shows up the more timid looking competitors. With a semi-convertible top, two wide side doors, and front A-frame brush bar, the Freelander’s rugged good looks do prevail. And although the glass front roof panels and removable hard-top take strong backs to reveal the open cabin, the final look should appeal to a wide array of outdoor enthusiasts.

Adding to the free-spirited style is the roomy front cabin. Too bad there is still no height adjustment for the driver’s seat. Tall drivers stare at the top of the windshield. To help compensate, powerful air conditioning, a leather-wrapped steering wheel with cruise and audio controls, connected to a premium 240-watt Harman/Kardon CD stereo, also make the ride. But despite a well sited stereo and easy to use rotary climate controls, we found many auxiliary switches far out of reach. Some redesign is needed here. Not so the 60/40 split rear bench seat with room for three buddies, complete with three-point safety belts for all. Fold down the rear seats, and the cargo bay provides a spacious 46.6 cubic feet of storage inside a tire-mounted, side-swinging back gate. 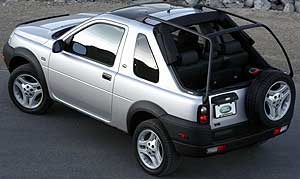 But style and accommodations are only part of the SE3 picture. What else makes this new Rover shine? How about the standard V6 powertrain? The Freelander’s transversely mounted, 2.5 liter, twin-cam, 24 valve variable induction engine delivers 174 horsepower and 177 pound- feet of torque. Punch the drive-by-wire throttle sharply and there is a robust engine note without the vibrations of most 4-cylinder rivals. Yet the steady power poured out only modest acceleration numbers, begging 0-60 at a leisurely 10.2 seconds, and running the quarter mile in an equally lethargic 17.7 seconds at 79 miles-per-hour.

Another class first is the Freelander’s five-speed automatic transmission with a sport setting and manual shift mode. It’s smooth, with gear ratios well suited to the engine’s output. Supported by four-wheel independent MacPherson strut suspension, the Freelander’s unitized chassis displays copious body roll in corners, but does stay firmly planted. The R-rated 225/55 17-inch all weather radials provide all the necessary grip, even when pushed hard. But more of a test comes when it’s time to stop. The Freelander relies on front-disc, rear drum brakes with ABS and electronic brake force distribution. 60 to 0 in only 120 feet is impressive for the Freelander’s heavy 3,700 pound mass. A soft pedal and some rear end shimmy detract slightly from the impressive stopping power.

Though designed to provide a more civilized on-road ride, and it does, the permanent 4- wheel drive system, with both traction and hill descent control, a first for its class, combined with 7.3-inches of ground clearance, is still more than capable of handling off-road terrain. Without a low range, it’s not the stump jumper that its big brothers are, but the Freelander will easily get you to places that most other compact SUVs won’t.

But with its V-6, it’s not as frugal as its mainly 4-cylinder competitors. The EPA estimated fuel ratings for Freelander are 17 city/21 highway. Our mixed test loop delivered a somewhat disappointing 17 miles-per-gallon.

There’s no doubt that Land Rover has earned its reputation as a maker of posh, but purposeful, SUVs. And that reputation comes with a price. The Freelander SE3 starts at $26,995. While that’s big for a small SUV, that does include a V-6, 4-wheel drive, and a full complement of features. As they say, you get what you pay for.

Secure with its position as the best selling sport-utility in Europe, the Freelander is now a tried and true competitor in the fast growing American compact SUV market as well. And with the 2003 Freelander SE3’s combination of on road, off road, and open air prowess, we expect a lot more American drivers to add this hot little ticket to their SUV shopping lists!