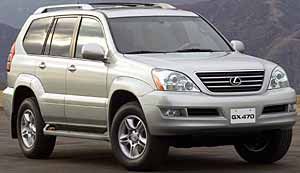 Some years ago, a popular movie coined a phrase ‘‘build it, and they will come.’’ And that seems to be the mantra of automakers and their approach to the mid-size luxury SUV segment. Now one of the latest to ‘‘build it’’ is Lexus, with ‘‘it’’ being the all-new 2003 GX 470. But with buyers already faced with an overwhelming array of luxury SUV choices, including Lexus’ own and very popular RX300, we wonder, will they come?

That depends on what’s waiting for them. Lexus knows the 2003 GX 470 must win over a demanding and somewhat jaded group of buyers , customers who expect a mid-size premium-priced sport-ute to be equally at home at the country club or on a boulder field. To that end, the GX 470 is built tough. Instead of the car-based unibody used in the smaller RX 300, the GX 470 rides on an all-new truck-style body-on-frame chassis shared with Toyota’s new 4Runner. And the GX 470 is styled to emphasize both toughness and sophistication. The stance is wide and aggressive, with just enough smooth edges. It’s handsome, if hardly distinctive.

And Lexus buyers may well be confused by its size. At 188.2-inches long, with a 109.8-inch wheelbase, the GX is only about 4 inches shorter than its big brother the LX 470. Yet the GX 470’s superbly-appointed cabin actually offers more front leg room and shoulder room than the LX, and easier entry, thanks to a manual height adjustment mode in the suspension.

As in the LX, the GX cockpit offers flowing luxury-car styling, and every bell and whistle that a high-end buyer could possibly demand, including front and side airbags for front seat passengers, and side curtain airbags for the front and second row seats. Those front seats are wide, plush, power-adjustable leather-clad buckets with heat and memory. And there are automatic dual-zone climate controls and either a standard 6-disc in dash CD changer, or an optional package that combines a top-end Mark Levinson audio system with a user-friendly DVD-based navigation system. And, if you wish, a forest’s worth of premium wood trim. And that’s just in the front seat.

Move to the second row, and there’s an optional entertainment system that combines DVD, CD and video game capabilities. You’ll enjoy it from a cushy 60/40 split seat that folds easily to either expand cargo space, or allow easy entry to the optional third-row 50/50 split bench seats. The lightweight third-row seats, which allow seating for eight, can be folded to the side, or easily removed and left at home.

Moving it all down the road is the same 4.7-liter dual-overhead-cam V8 that powers the larger LX. In the GX it delivers 235 horsepower and 320 pound-feet of torque, and feeds the full-time 4-wheel-drive system through a refined 5-speed automatic.

For on-road driving, the 4-wheel-drive system is backed up by a wide range of automatic systems including traction control, Vehicle Skid Control, and variable suspension damping. While off-road uses are covered by Downhill Assist Control and Hill Start Assist Control. These systems, when combined with the 4-wheel-drive system’s Torsen torque-sensing center differential, deliver solid traction on loose surfaces and inclines that we would hesitate to tackle in many other SUVs.

But most GX 470s will spend their entire lives on pavement, such as the winding roads around Park City, Utah, where we got our first taste of this latest Lexus SUV. Riding on a sophisticated double-wishbone front suspension with coil-over shocks and a 4-link solid-axle rear with air springs, the GX 470 delivers a smooth ride typical of today’s luxury SUVs. On curvier roads, the GX exhibited high levels of grip for an SUV, but plenty of body roll as well. Acceleration was strong, with the V8 delivering plenty of low end oomph. The drivetrain is smooth and flexible, however, as we expect given a Lexus lineage.

Lexus expects that lineage to help sell a modest 20,000 GX 470s each model year. Prices have not yet been announced, but we expect the GX to carry a base price of about $45,000 when it arrives in December. We estimate that will be about five grand more than a loaded Toyota 4Runner.

The luxury sport-ute segment is getting so crowded that ‘‘Build it, and they will come’’ may be not so much an automaker’s mantra as a marketing department’s wishful thinking. But with the Lexus brand’s strong history of quality, performance and fierce owner loyalty, we think that when the 2003 Lexus GX 470 hits the showrooms, they’ll not only come… they’ll buy!