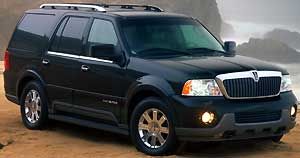 The 21st century’s most desirable sport utility vehicles are all about luxury. In fact, selling a sport-ute without leather, heated seats, and a navigation system to today’s hedonistic car buyer is becoming quite a challenge. And one of the most luxurious of all SUVs is the Lincoln Navigator. But since it already boasts more comfort and technology than a Rolls Royce, what can the all-new 2003 Navigator possibly offer buyers that they don’t already have?

How about even more innovation, and believe it or not, more value! To make the 2003 Navigator stand apart from its full-size luxury SUV competitors, Lincoln has heaped on the standard features, and has added convenience options not available anywhere else.

But Lincoln also knows that before you can add on the luxury, first you must design a solid base. And to that end, the Navigator platform, which it shares with the Ford Expedition, has been completely redesigned, and now features an all-independent suspension with air springs. The Navigator’s bodywork is new, too. The crisp, tailored lines are now more athletic than brutish, despite the still overtly aggressive chrome grille. Think of the Navigator as a heavyweight prizefighter in an Armani suit. And it puts up a good defense, too, with a standard rear obstacle detection system, dual stage front airbags, and side curtain airbags that also deploy in a rollover accident. The Town Truck’s huge grille is one of the few pieces of bright work you’ll find, as Lincoln designers have gone after a cooler, European style.

That theme continues inside, too, where you’ll find plenty of leather and walnut complemented by low-luster satin nickel trim. White LEDs highlight the switchgear at night, while the main gauges use cold cathode technology for their distinctive illumination. This Lincoln-only interior has great visual appeal, and excellent ergonomics. The steering wheel has buttons for the cruise control as well as for often-used stereo and climate control functions. Less convenient are the window switches placed European style on the center console. A GPS CD-based navigation system is again an option. While the screen is small, it works easily with clear directions. Some trim pieces, like the door covering the stereo and navigation system, felt cheap and didn’t work smoothly. What did work smoothly were the optional power-folding third seats. They allow quick conversions from people to cargo-hauling configurations. The headliner mounted DVD entertainment system is another nice option for peace and quiet on long trips.

Accessing the rear cargo area is easy, thanks to an available powered remote control liftgate , a first for an SUV. At 10 seconds, operation seemed a bit slow and less polished than the power hatch fitted to Chrysler’s minivans. Optional on the top-of-the-line Navigator Ultimate are the powered running boards.

Resting nicely under the Lincoln’s composite hood is the twin-cam version of the corporate 5.4 liter V8. Not shared with Expedition, it pumps out 300 horsepower and 355 lb.-ft. of torque. That trounces big imported SUVs, but it still trails Cadillac Escalade’s 345 horsepower and 380 lb.-ft. The only transmission is a four-speed automatic. And while few Navigators will venture far off road, they could. Our tester uses Ford’s very capable ControlTrac on-demand four-wheel drive system with low-range.

With all this hardware, Navigator owners can expect 0 to 60 jogs of 10.3 seconds. The full quarter mile ends in 17.6 seconds at 82 miles per hour. Not fast, but then this is a 3 ton truck. And, in our slalom exercise, the Navigator’s bulk was felt in the form of a soft, rolling ride and a strong tendency to understeer. Our testers also noted, however, that the 2003 Navigator, with its independent rear suspension, is clearly superior in ride and handling to the previous generation Town Truck and to most others in its class including the Escalade. Braking performance was also good, with the big Lincoln’s 4-wheel ABS disks hauling itself down from 60 in an average distance of 140 feet.

Prices for the 2003 Lincoln Navigator start at $48,775 for the 2-wheel drive Luxury Model. Premium Model adds AdvanceTrac, traction control, and heated and cooled seats for $50,025. While the Ultimate Model, with power tailgate and power folding seats, starts at $51,400. Our full up 4X4 tester stickers at $59,165.

However, that’s still several grand less than the base price of the Lexus LX470, and right in line with the Cadillac Escalade. But no luxury SUV can measure up to the Lincoln’s incredible list of standard and available equipment, regardless of price. And, while some competitors may have a more rarified lineage, you have to also look at what the vehicle delivers. And, in the world of luxury SUVs, we think the 2003 Lincoln Navigator more than earns its heavyweight bragging rights.