Saab has always been known for its rather quirky approach to sport sedans. Like sticking with turbocharged 4 cylinder engines when 6-cylinders are all the rage. Hatchbacks when everyone else deemed them too utilitarian. And then there’s that console-mounted ignition switch. But despite this decidedly left-of-center approach, one thing has always been clear. The driving experience is the top priority at Saab. Well, there’s a new Saab 9-3 ready to hit the streets, and indeed it does look a little more mainstream than in the past. So we wonder, in this shift towards the middle of the road, did the driver get left behind?

Well, according to Saab, the answer to that question is a resounding NO! As during the launch of the new 2003 Saab 9-3, designers went to great lengths to explain that, like all Saabs before it, the main thrust of the new Saab 9-3 design process was to build the car around the driver.

And after spending several weeks with a 9-3, we’re happy to confirm that from the outside in, the new 9-3 is definitely a driver’s machine. In fact, the 9-3’s new exterior styling, which brings it closer in appearance to the larger 9-5 sedan, conveys the feeling that this is a car ready to spring into action. And this is the first 9-3 to forsake its traditional hatchback styling, although Saab says that will return later. But the new 9-3 does retain its predecessor’s overall length of 182.5 inches. Wheelbase, however, has been stretched 2.7 inches to 105.3, and front and rear tracks are 2.8 and 2.5 inches wider respectively.

More essential ingredients are added to the mix by way of the 9-3’s suspension components. MacPherson struts handle the duties up front, while in the rear is a new independent four-link layout that includes what Saab calls ReAxs. ReAxs is a passive, rear-wheel steer characteristic that’s been engineered into the system to improve handling by reducing understeer. And take our word for it, it works! Our drivers noted that the 9-3 ‘‘cuts through the cones like a sharp knife’’ and ‘‘feels as though it wants you to drive it quickly.’‘

Steering response from the rack and pinion is spot on, with precise turn ins and a fair amount of useful feedback. Our drivers also appreciated the non-intrusive nature of the standard ESP electronic stability program and the excellent operation of the 9-3’s 4-wheel disc brakes. In addition to ABS, the 9-3 now comes with Cornering Brake Control, which aids stability to hard cornering maneuvers when under heavy braking. Throw in Electronic Brakeforce Distribution, and you’ve got a car that’s capable of consistently bringing you to a stop from 60 in 124 feet. Also receiving high praise are the 9-3’s new engines. Linear models like our tester get an all aluminum 2.0 liter turbocharged powerplant producing 175 horsepower at 5,500 rpm, and 195 pound-feet of torque at 2,500 rpm.

Step up to the Arc and Vector models, due early next year, and the same 2.0 liter engine spins out 210 horsepower and 221 pound-feet of torque. Both engines use Saab’s new Trionic 8 engine management system and can be mated to one of three different transmissions: a new adaptive Sentronic 5-speed automatic, a new 6-speed manual, or the current 5-speed manual that’s been revised with a new cable linkage to replace the rods.

Our tester with the 5-speed manual took us to 60 in 7.3 seconds and on through the quarter mile in 15.8 seconds at 83 mph. Two big things we noticed right away were the almost complete absence of turbo lag and torque steer. The 9-3 pulls nicely off the line through the first two gears and then seems to run out of steam a little once you hit third. The shifter is smooth and precise, but some of our staff preferred the solid feel of the rod linkage of the old shifter. 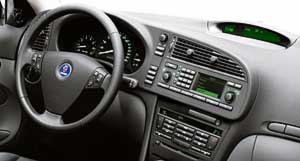 Saab continues with its driver-oriented, aircraft-like approach when it comes to interior accommodations too. Notice the cowl top information display.

But when it comes to comfort, the Linear is no slouch. Leather is standard and our tester came with a popular option package that included power adjustments for the driver and seat heat. The option package also included a 6-disc in-dash CD changer just below the smooth rotary climate controls. But to keep the Linear’s price down, concessions were made, as the interior plastics and upholstery are more utilitarian than we’re used to seeing on Saabs. And one design element we were not fond of is the hand brake. Careful or you’ll pinch your fingers.

But in the rear, passenger seating is less pinched than ever. With its longer wheelbase, the 9-3 offers more rear leg room than competitors from BWM, Mercedes, and Volvo. And although the hatchback is gone, versatility is not. The split folding seat even includes a passthrough to the long, tall 14.8 cubic foot trunk.

So the good news is, with its superb handling, quiet ride and excellent highway manners, its punchy turbocharged 4 cylinder and surprisingly low price, the new Saab 9-3 has still retained its uniqueness while becoming more attainable to mainstream buyers. The even better news is the driver didn’t get left behind!