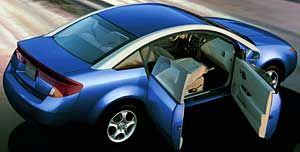 When the Saturn S-Series debuted for 1991, it promised to revolutionize how General Motors built and sold small cars. And while that didn’t quite happen, GM’s Maverick division has for over a decade produced a unique line of sturdy compacts that are easy to buy and easy to own. But nothing lasts forever, and for 2003 Saturn is replacing the S-Series with a fresh small car lineup called ION. But do the new Saturns deliver more than the original?

Saturn ION. A futuristic name for a futuristic carline? Well, based on our first impressions after a few short days with ION in the wilds of Texas, we think the 2003 Saturn ION Sedan and Quad Coupe are even more appealing and more innovative when compared to the original SL and SC. Especially the ION Quad Coupe, which expands the current SC coupe’s unique three- door configuration into a four-door, all while maintaining the structure and shape of a coupe design.

But most of our tango in Texas was with the more conventional, high volume 4-door ION. But, with the exception of the dual rear-access doors and a few styling cues, both cars share the same components, all-new platform, and character.

Per Saturn tradition, that new platform uses a stamped steel space-frame that makes up the complete structure of the ION from front to rear. It’s then smartly dressed with Saturn’s signature corrosion and dent resistant polymer panels. Both sedan and coupe ride on a 103.3 inch wheelbase, about the same as a Civic, with a wide, stabilizing 58.8 inch track. Overall ION is 4.5 inches longer and 3 inches taller than the SL.

Power gets a bigger boost. GM’s global four cylinder ECOTEC 2.2 liter engine powers all IONs. This twin-cam 16-valve LEV powerplant, first used in Saturn’s mid-size L and VUE Sport-ute, produces 140 horsepower and 145 pound-feet of torque. It’s worlds smoother and quieter than the S-Series 1.9-liter. There are three available transmissions, depending on model. The standard offering is a Getrag 5-speed manual with a synchronized reverse gear. Optional only on the Quad Coupe is the continuously variable VTi automatic transmission that we liked in the VUE. With it, ION glides away like an electric car. Up level ION sedans can also be equipped with a 5-speed automatic currently being used by GM’s Opel and Saab brands. Traction control and ABS brakes are available, too.

When it comes to ride and handling, ION’s suspension has been revised to give what Saturn claims is a better blend of ride quality and sporty handling. That’s a risky claim since the ION discards the S-Series all-independent strut suspension for a front strut, semi-independent rear torsion beam layout. But front and rear stabilizer bars are standard, most tires are larger, and the hardware is attached to GM’s new, and much stiffer, DELTA architecture. We found the ION’s highway ride to be firm and controlled, not harsh, and almost European. Bumps and expansion joints had a negligible impact on occupants. Under hard cornering, there is a fair amount of understeer, and a moderate amount of roll. But the ION never felt squirrelly, or like the average driver might fight for control.

Another advance on the ION is electric power steering, and its software is tailored to match each of the five tire/suspension combinations available.

Thanks to the ION’s larger exterior dimensions, the interior is nicely roomier, too. And with the Sedan’s three trim levels, the ION can also be easily tailored to buyer’s needs. Our top level photo car had leather trimmed buckets with a ratchet-style seat height adjuster. To help maximize interior space, the ION’s tilt steering wheel is slightly smaller than normal. And to supposedly improve visibility through that steering wheel, the gauges are located in a pod at the top of dash center stack. This is one ION innovation that gets mixed reviews from our staff. Just below is a large stereo head, with several systems to choose from, and no-nonsense rotary climate controls.

And, on the safety front, the ION is one of a very small group of entry level cars to offer side curtain airbags. In the rear, the ION Sedan’s split-folding seat includes room for three with 33 inches of leg room. That’s nearly two inches less than Civic, but ION leads with a generous 14.7 cubic foot trunk.

It also beats most of its competitors in pricing. The entry level ION Sedan with a manual and no A/C is a mere $11,995. A manual level two trimmed ION, with A/C, power door locks, and CD player, is still just $13,995. While a manual level three ION adds remote keyless entry, power windows, cruise, and a cassette/CD stereo for a still very reasonable $15,495. Adding an automatic transmission to any level ups the price by $900.00. Pricing on the ION Coupe, which won’t be available until early 2003, hasn’t been announced, but it should also be a bargain.

So, does the 2003 Saturn ION deliver more than the original Saturn SC and SL? Yes, without question. In fact, with its solid build quality, unique and mostly clever exterior and interior layout, and rock bottom pricing, we think the new 2003 Saturn ION is set to deliver a real shock to the small car class!