When Saturn first started marketing cars, it promised us not only a new line of uniquely built automobiles, but a new way of doing business as well. And after ten years, and a modestly expanded line up, they’ve largely succeeded. So, now for 2002, Saturn is branching out into the growing small sport utility segment. And once again they’ve made a bold promise that their SUV offers a new view on the concept of small sport-utes. So, is that “Vue” really different?

Well, that depends, on whether you mean different by Saturn standards, or the standards of the rest of the auto industry. To the folks at Saturn, the 2003 Vue sport-utility vehicle is simply a logical extension of the philosophy that has produced the most innovative members of the General Motors family. But by the standards of other automakers, and even some other GM divisions, this is not quite your run-of-the-mill sport-ute.

Like Saturn cars, the Vue is built on a steel space frame, with polymer body panels. This eliminates the need for protective lower body cladding, and gives the Vue a very clean look. The long hood and bull nose, with its smoothly integrated headlamps, high-mounted fog lamps, and wide open lower grille, is familiar. Like a cross between a Saturn sedan and the Vue’s main competitor, the Honda CR-V. While the tall tail actually reminds us of the Mercedes-Benz M-Class. 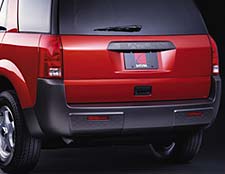 But Vue rides on a 106.6-inch wheelbase, with a length of 181.3 inches, and a width of 71.5 inches. All measurements significantly stouter than competitors like CR-V and Toyota’s RAV-4. And unlike those offshore-utes, the Vue offers a choice of engines, both also used in Saturn’s largest L-Series sedans and wagons. To start, GM’s global Ecotec 2.2-liter dual- overhead-cam inline four, with 143 horsepower and 152 pound-feet of torque. Optional is this 3.0-liter twin-cam V6 rated at 181 horsepower and 195 pound-feet of torque.

Transmissions include a 5-speed manual, or a new Hydramatic developed continuously variable transmission for the Vue 4-cylinder. The V6 engine is equipped with a new adaptive 5- speed automatic. Vue is GM’s first use of a stepless CVT in America, and only its second 5- speed automatic.

Both front and all-wheel-drive versions of the 4-cylinder Vue are available. Traction control is optional with two-wheel drive. The V6 is all-wheel-drive from the get go. The all-wheel-drive is a light-duty on-demand system that’s similar to the CR-V. It uses a gerotor pump and multi-plate clutch pack to transmit engine power to the rear differential only when needed. Up to 69 percent of the engine’s torque can go to the rear wheels on 4-cylinder models. On V6 models, rear wheel torque is limited to 57 percent.

We had our first chance to drive the Vue during its national press introduction. Despite limited time with the 4-cylinder CVT, we were impressed by its silent, seamless operation. Saturn projects 7-11% better fuel economy for the CVT as compared to a typical stepped automatic, and we think that could be conservative. As for the V-6, we’ve praised the smooth, torquey V6’s performance in the L-Series, and the Vue was no different. But, mated to the new 5-speed automatic transmission, it becomes even more refined and flexible.

On steep grades, the adaptive programing works wonders with none of the jerkiness and hunting for gears so common to older automatics Brakes are unremarkable , discs in the front and drums in the rear. Like most of the small-utes, ABS is unfortunately not standard. The Vue rides on an all-independent suspension consisting of struts and coil springs up front, and a three-link trailing arm setup in the rear. It gives the Vue a very balanced, car-like feel, with reasonably long wheel travel. There is the expected sport-ute understeer in tight corners, but body roll is moderate, despite the use of relatively soft springs which deliver a comfortable ride.

The part of the Vue that you ride in is a well, but not opulently, equipped interior that is comparable in size to the Ford Escape and Mazda Tribute. The dash layout is clean, and user-friendly. Controls are large and clearly marked, as we expect from a Saturn, and for that matter, most GM vehicles. Safety options include head curtain airbags, which provide protection in side and rollover accidents, and the factory installed OnStar emergency locator system.

The front seats are a pair of well-padded buckets, that support the back well, but offer a little too little side support. The rear floor is perfectly flat with a 70/30 split bench seat. It folds easily and locks into place. Cargo space is a reasonable 30.3 cubic feet with the seats upright, and it’s easily accessed through a big hatch and a very low load floor. Plus, the front passenger seat folds to accommodate cargo up to 8-feet long.

Of course, it doesn’t matter how much it can hold if you can’t afford to buy it. Not to worry. Like most small-utes, the front-drive 4-cylinder Saturn Vue starts with a very reasonable base price of $16,835. Add the CVT transmission, and the price steps to $17,775. While all- wheel-drive pushes it up further to $19,370. Go whole hog with the all-wheel-drive, V6, and 5- speed automatic, and you pay a still competitive $23,085.

So, from price, to power, to practicality, the 2003 Vue offers buyers all the familiar cues of the small sport-ute class. Yet, with its space frame and polymer skin construction, CVT transmission, and unmistakable styling, it also offers something quite different. Different enough, we think, to draw more than a few buyers away from the sea of CR-Vs and RAV-4s, and that’s saying a lot. Indeed our view, on the Vue, is that it’s pure Saturn. A conventional, yet unconventional SUV, from a brand that understands exactly where they’re headed.