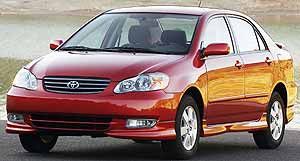 Toyota’s Camry is one of America’s all time favorite sedans. It’s perfect for the growing family. But what about those that want the refinement and reliability of a Camry, but live a more compact and more frugal lifestyle. Well, according to Toyota, the solution is this all-new 2003 Corolla. It certainly looks like a shrunken Camry. But can you really get this much car into this much car?

At first glance it certainly looks that way! And when taking a closer look at some hard numbers, it’s even more evident that the all new 2003 Toyota Corolla is now one of the leaders of a trend that has seen compact cars growing in size and features in recent years. Longer, wider, and taller than its immediate predecessor, this ninth generation Corolla now rides on a 102.4 inch wheelbase with an overall length of 178.3 inches. In wheelbase, the front-drive Corolla falls between the segment leading Honda Civic and Volkswagen’s sporty Jetta. But overall, the Corolla is four inches longer than the Civic and six inches longer than the Jetta!

To accomdate the Camry-like styling, and the desire to maximize interior room, the base of the Corolla’s A and C-pillars have been stretched nine inches along the beltline. The more substantial greenhouse also provides for better visibility and less drag.

Corolla’s get-up-and-go comes from a familiar all-aluminum 1.8 liter, twin-cam, 16-valve 4. With Variable Valve Timing with intelligence, output is up slightly to 130 horsepower and 125 pound-feet of torque. A 5-speed manual transmission is standard, with optional 4-speed automatic. Our manual tester was good for runs to 60 in 8 seconds, with the quarter mile coming in at 16.3 seconds at 87 MPH. The Corolla has a fairly strong launch, with power now spread more evenly across the torque curve. The 5-speed is still a little rubbery but engages precisely.

Out on the open road, the heavier and more substantial Corolla offers up a ride that is very Camry-like. Soft but not floaty, with none of the bump harshness of the previous car. And, in our low speed slalom exercise, the MacPherson strut front, torsion beam rear suspension system feels downright sporty. Sharp turn ins are accompanied by the expected touch of understeer, but with plenty of grip, it never crosses the line into obnoxious plowing. The nicely balanced chassis keeps weight transfer consistent and predictable. But the variable-assisted rack-and-pinion steering, while responsive, feels almost Germanic in its isolation from the road.

The same can be said for the Corolla’s optional ABS braking system. With 10.8 inch ventilated discs in front and drums in the rear, we averaged stops in 128 feet. Not especially short but consistent for disc/drum cars in this size class. But, ABS kickback through the pedal is minimal. While we’re told most drivers prefer it this way, you really don’t know what the system is doing.

As we mentioned earlier, larger, better equipped interiors are becoming the norm for compact sedans. The new Corolla has a total passenger volume of 90.3 cubic feet. Of direct competitors, only Ford’s Focus provides more. Not only is the new Corolla more roomy, once inside the Camry influence shines through everywhere. A higher H point for the front seats makes ingress and egress easier, and along with more glass, gives a commanding view in all directions. Seats are also more comfortable and supportive, leather is optional, and our S model tester comes with standard height adjustment. A leather-wrapped tilt steering wheel is also standard, along with sport-style gauges, an AM/FM/CD stereo, and a leather-wrapped shifter. With top notch materials throughout, it’s a richer-feeling Corolla than any of its predecessors.

In the rear seats you’ll find good room for two adults or three kids, and behind the 60/40 split folding seat backs, a generous 13.6 cubic feet of cargo space.

With the 2003 Toyota Corolla now offering literally more of everything, more size, more features, and a lot more finesse, we think it’s safe to say that Toyota’s ‘‘great little car’’ is all grown up!