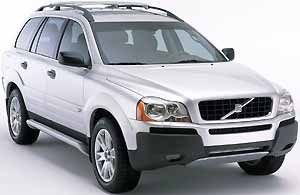 Mention the name Volvo, and the first things that come to mind are boxy, tank-like wagons, and safety. In fact, Volvo has staked its reputation for the last 75 years on those two things, all while expanding their model lineup into other areas, like coupes and convertibles, and adding all-wheel drive technology. Well, now Volvo has belatedly set its sights on the SUV segment with the introduction of the all new XC90. But what has Volvo done to make their SUV different?

Apparently as long as Volvo keeps holding the safety banner high, how different the new 2003 XC90 is or isn’t doesn’t seem to be an issue with buyers. Because according to Volvo, they already have orders for 3,000 of the only 5,000 XC90s they expect to import here by year’s end. And that’s before the XC90 has even hit the showroom floors!

But Volvo engineers have never been content to rest on their safety record alone, and there are features to be found in the XC90 that really do make it different from other SUVs. It can also be configured in a number of different ways to suit your personal needs.

For instance, the XC90, with its unmistakable Volvo styling, rides on a liberally modified chassis borrowed not from just any car, but from their flagship S80 luxury sedan. The XC90’s long 112 inch wheelbase and wide 64 inch track are both slightly larger than a BMW X5. The stylish 190 inch body is longer too, which puts the XC90 at the upper end of the mid- size class. So, interior room is generous, with comfortable seating for a family of 5 or 7.

Although Volvo admits that the available third row seats will only do in a pinch for adults, they’re perfect for kids, and stow easily and cleverly into a flat cargo floor when not needed. Also perfect for kids is the booster seat in the middle of the 40/20/40 split second row. Like the parent company’s Ford Expedition, it slides forward to give mom and dad easier access to the youngster. A removable center console helps that, too.

When cargo is the top priority, fold it all flat, along with the front passenger’s seat, for a maximum cargo capacity of 93.2 cubic feet. When upright, those in front are coddled by extra- large and comfy buckets with available leather and 8-way power for both sides. Appropriate for a premium class SUV.

As expected, the inside of the XC90 is also one of the safest places to be on the planet outside of NORAD’s command center. And that was emphasized in a big way at Volvo’s Safety Centre in Sweden when they put an XC90 through a 15G rollover test for the motoring press. To resist such impacts, the roof structure uses Boron steel that is 4 to 5 times stronger than normal steel. Rollover, as well as side impact protection, is provided by side curtain head airbags for all three rows of seats. Volvo’s standard Roll Stability Control not only triggers the airbags in a rollover, but helps avoid being upside down in the first place. RSC uses gyroscopic sensors that track the vehicle’s roll angle and roll speed. RSC can activate the DSTC stability program before the XC90 reaches the point of no return.

We got nowhere near that point during our low speed slalom test. Our all-wheel drive tester, with a MacPherson strut front, multi-link rear suspension, stayed firmly planted throughout the exercise. There is a little more noticeable body roll than the V70 Cross Country wagon due to its 3.5 inch higher center of gravity, but it never felt tippy or uncomfortable. And the Speed-sensitive rack and pinion power steering is nicely weighted and offers a fair amount of feedback. We mentioned earlier that the new XC90 offers plenty of choices. Both front and all- wheel drive are available. Like the S60, the XC90 uses the seamless Haldex electronic all-wheel drive system with traction control. It can route up to 95% of the torque to either axle.

Under the hood there is a choice of engines. The base powertrain is an enlarged 2.5 liter, light-pressure single-turbo in-line 5 cylinder with 208 horsepower, and 236 pound-feet of torque available at only 1500 rpm. Our tester came with the more robust and also enlarged 2.9 liter, bi-turbo in-line 6. With continuously variable valve timing on both intake and exhaust valves, T6 ratings are 268 horsepower, with 280 pound-feet of torque at only 1800 rpm. There are two transmissions available, too. But here the choice is not yours. The T6 is mated to a 4-speed automatic with Geartronic self-shift, while the 2.5T sports a 5-speed Geartronic.

At the track, our T6 showed plenty of spunk off the line for a 4610 pound SUV. 0 to 60 came in 8.8 seconds, with the quarter mile passing in 16.3 seconds at 87 mph. Power is adequate throughout the rev band, making at-speed passing a breeze. The 4-speed is well mated to the 6 cylinder engine and delivers crisp gear changes, and the Geartronic’s manual mode is handy for when holding a gear is necessary. The XC90’s braking system likewise features a handy assortment of electronic goodies to aid the large 12 inch 4-wheel vented discs in bringing you to a stop. With ABS, Electronic Brake Distribution, and Electronic Brake Assist, we averaged stops from 60 in 128 feet.

By offering common sense power and drive train choices, a smart exterior, and a comfortable multifaceted interior, all backed by a company with an over-the-top approach to safety, the Volvo XC90 is indeed a fresh new choice in the premium mid-size SUV segment. And while much of what the XC90 offers we have seen before, we very much like this combination that is distinct, decidedly different, and definitely Volvo.