Keeping up in the luxury-performance sedan segment is never easy. You’re competing with the likes of Audi, BMW, Jaguar, and others. But since it arrived for 1996, the Acura TL has been steadily carving itself a comfortable little niche as a high value over achiever. Well, for 2004, there is a new TL and a more aggressive strategy. No longer content to whittle away, Acura has given the latest TL the tools to cut into its rivals in a big way.

And they threw in some ‘‘know-how’’ too! Besides its obvious good looks and added muscle, the 2004 Acura TL was taught how to aptly handle that added glory.

Though based on the redesigned 2003 Honda Accord, the new TL receives an upgraded chassis that cites a nearly 24 percent boost in torsional rigidity. From tip to tail, the tauter lines and creases slice through its sleek and defined body. While wheelbase is similar, the TL is actually over 6 inches shorter than last year. The TL rides on a highly refined double-wishbone front and 5-link rear suspension. Honda’s well-regarded torque sensing variable assist power steering and standard electronic stability control adds even more precision and security.

But the TL’s sharpest sculpting lies beneath the hood. Its heavily revamped 3.2-liter single-overhead cam V6 not only delivers more horsepower, but more torque. With 270 horsepower surpassing last year’s, and now extinct, high-performance TL Type-S, this TL also cranks out an elevated 238 pound-feet of torque.

Our test car was equipped with a close-ratio 6-speed manual that’s packaged with a limited slip differential and higher rate springs. Surprisingly we found shift action a little rubbery. A 5-speed Sequential SportShift automatic is a no-cost option. Better acceleration numbers might have been posted if our 6-speed’s on-off clutch wasn’t so slippery. Yet the TL still managed to arrive at 60 in just 6.3 seconds. The quarter mile passes in 14.8 seconds at 96 miles-per-hour.

And though competing sports sedans like the BMW 3-Series and Cadillac CTS feature rear-wheel-drive systems for handling tenacity, the front drive Acura TL proved nearly as nimble and quick. Save for some minor understeer, the TL hammers through even high speed lane changes. Overall the rear end stays planted nicely, and we forgive the TL’s very mild body roll. We said the last TL was one of the best handling front-drivers in the world, and the new car is a step up from that.

Braking performance is top-notch, too, with 60-to-0 stops averaging a short, neat 115 feet. Our drivers were very impressed with our 6-speed’s all-disc ABS brakes with Brembo front calipers. Results are comparable to some recent Porsche’s we’ve tested. 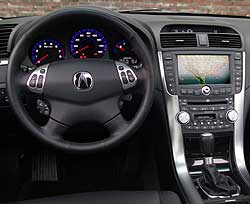 Rear seat room is seldom a high point of popular sport sedans, but with its front-drive packaging the new TL scores very well in comfort. To ensure safety as well as comfort, Acura has fitted the cabin with seat-mounted side airbags for front occupants and side curtain airbags for front and rear passengers.

The shorter length took its toll, however, on trunk space. It shrinks from 14.3 cubic feet to 12.5. But, to make room for longer items, there is a lockable rear-seat pass-through to help compensate.

And something TL drivers won’t have to compensate for is fuel economy. EPA estimates are 19 city and 28 highway. Our manual raked in 25 miles-per-gallon in a test loop. Impressive for any sporty sedan.

And, like the previous TLs, the all new 2004 edition proves to be a bargain, especially with all its added perks and performance. The base price for both the automatic and manual is $33,195. With the added NAV system the price jumps to $35,195.

The first generation TL was the car that saved the Acura franchise by offering more luxury and performance sedan for the money than any rival. With new glitz and glam, we feel that the even more capable 2004 Acura TL will not only add many more converts to Honda’s premium brand, but it raises the bar competitors must leap to ear-bleeding heights.