Over the years, we and others have consistently proclaimed the BMW 5-Series as the best sport sedan in the world. So when a new one comes along, it certainly has big tire treads to fill. Now at first glance, this all new fifth generation 5-Series certainly looks up to the challenge, with spicier styling, more luxury, and the most advanced engineering in its class. But will diehard 5- Series fans embrace all this change? And more importantly, is it still simply the best? Every visual aspect of the new-from-the-ground-up 2004 BMW 5-Series has been punched up to reveal an even stronger and clearly more imposing look. Then after clearing the canvas of their 7-year veteran, BMW embarked on a mission to rejuvenate all the mechanical bits as well. The new 5 is all about innovation, beginning with a hybrid aluminum/steel chassis. BMW chose to make only the front unibody and suspension from aluminum. The goal was to save weight and achieve the desired 50/50 weight distribution for perfect handling, without the cost of an all-aluminum structure. However, the most intriguing mechanical innovation is in your hands. The new 5-Series Active Steering System is very impressive. Despite having variable steering ratios, it’s very intuitive. You always feel like you’re steering just the right amount. That makes slow maneuvers very easy, and at high speed it takes the fear of oversteer out of the equation. So emergency lane changes are really done without any fear at all. All in all, it’s a very important new turn in driving safety.

The 5-Series line-up will include three U.S. sedans. The 530i will be first with a 225- horsepower 3.0-liter inline-6. The 184-horsepower 525i will follow. A 545i, which replaces the current 540i, with the same 325-horsepower 4.4-liter V8 as the 745i, will top the series until a new M5 arrives. Another ode to the 7-Series comes in the way of styling. And while the new, longer 5- Series is definitely a toned-down version of designer Chris Bengle’s controversial Seven, the resemblance is unmistakable. It is now much more to our liking. The elegant yet muscular and most distinctive styling is home for available Adaptive Headlights that steer up to 15 degrees. Inside the four-door’s highly-appointed cabin, the 5 mimics the visual and luxury appeal of both the 7-Series and the Z8 roadster. Power seats with memory are standard. Gauges are modernized BMW, large, round, and clear. But the 5-Series will be available with BMW’s first stab at a head-up display. And it works well. Automatic climate controls, anti-theft AM/FM/CD audio system, and a big center dash display, complete the picture. All interface with a simpler iDrive system. It controls entertainment, navigation, communications and climate. It is much more intuitive than in the 7-Series, and the control knob resides on the console with the gearbox shifter. On that, all transmissions are 6-speeds, a delightful manual, an automatic, and an SMG Sequential Manual Gearbox. 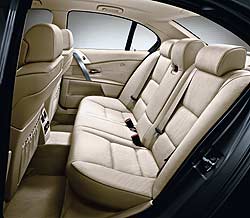 Two areas of significant improvement in the new 5-Series are the rear seat and trunk. Rear seats now can accommodate three adults comfortably, and there is an available pass through to a more usable trunk. But enough about trunk space. What’s the new 530i like to drive? Well, we had a chance to drive the new car at two venues. On the twisty, but smooth, back roads of the island of Sardinia, and on the rougher byways of our home state of Maryland. In both cases we noticed a vastly improved ride. Smooth yet solid, with not a hint of structural twist or bending. In Italy we drove Sport Package cars with Active Steering and Active Roll Stabilization, but we went to our local test track without these innovations. Still, the new 5- Series is every bit as skillful at switchbacks as its predecessor. Turn-ins are spot on, and it’s easy to induce just a hint of oversteer. The standard DSC stability system comes on gradually as traction decreases. Nothing alarming here until it has to be. Then it clamps the brakes hard, which are imposing on their own. Big discs with anti- lock. Stops from 60 took a short, stable 125 feet with no noticeable fade. Jamming the accelerator to the floor produced even less drama. 0 to 60 runs averaged 7.3 seconds. That’s little changed from the previous car. The quarter mile lapsed in 15.6 seconds at 92 miles per hour. On the go pedal again, smoothness replaces brute punch. The first of the new 5-Series, the 530i, arrives here this fall. Followed soon after by the 525i and the 545i. A wagon is expected next year, and an M5 after that. And while they’ve really bulked up the new 5, prices are less so. Base price for the 525i will start at $39,995. That’s up about 4%. The 530i will fetch $44,995, and finally the V8 545i starts at $54,995. So, after making our way around the roads on two continents, we’re ready to cast our vote. We give BMW all thumbs up for applying so much new design without spoiling a classic. But is the 2004 BMW 5-Series still the best sport sedan in the world? Yes, it’s still king of the tire treads, and we don’t think that crown is going anywhere else soon.