Bigger may be better in the SUV culture, but not everyone wants a full-size bruiser like this one. BMW proved that with the X5, a mid-size people mover that put the sport back in sport-utility. And now BMW is trying to see if lightning strikes twice with the compact X3 luxury utility. Think of the X3 as smaller in size, but bigger where it counts. And, for a family, it just might be the most desirable BMW yet.

What an amazing automotive world we live in that the premiere builder of sport sedans has also become a benchmark maker of luxury SUVs. That’s certainly the case with the BMW X5 which took the suburban upper crust households by storm when it was introduced in 2000. Now, it’s 2004, and enter the brawny, but more compact, X3 Sports Activity Vehicle. The X3 is not just a smaller X5, but a fresh approach with its creased and chiseled Chris Bengle styling. A machine of purpose and function, the X3 is heavily based on the 3-Series cars, and is slightly longer than the 3-series wagon. With a 110.1-inch wheelbase, 8 inches of ground clearance, BMW’s X-Drive all-wheel-drive system, Hill Descent Control, and 17- or 18-inch wheels, the X3, though compact in size, could never be called the off-road runt of the SUV litter.

First introduced on the X5, X-Drive has undergone major changes. Once wearing a fixed rear-to-front torque split, the second generation X-Drive features a multiplate clutch center differential with pro-active variable torque split capabilities. Starting on dry, about 60% of the power is directed to the rear wheels. As speeds rise, 100% of torque can flow aft. In corners, X-Drive adjusts the torque split for best handling using input from BMW’s latest dynamic stability control. In extreme conditions, up to 100% of the torque can be sent to the front axle. 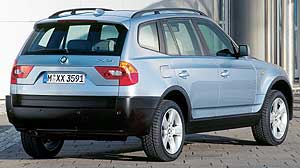 BMW learned a lot about making a tall unibody chassis from the X5 and they have made the X3’s structure even more robust, needed since the X3 packs plenty of power in two choices, both of which share BMW’s M54 engine architecture. The X3 2.5i commands a familiar 2.5 liter, twin-cam inline six pushing 184 horsepower and 175 pound-feet of torque. Our 3.0i tester had the stroked 3-liter six, also used in the heavier X5, generating 225 horsepower and 214 pound-feet of torque.

Both sixes are mated to either a standard 6-speed manual transmission or our tester’s 5-speed automatic with Steptronic manual mode. A trip to the track clocked our X3 3.0i from 0-60 in 7.9 seconds, and proved a quarter mile run of 16.1 seconds at 87 miles-per-hour. Shifts are smooth. Even in manual shift mode, the X3 pulls with refined confidence.

Confidence too in braking thanks to 4-wheel vented discs with ABS and electronic brake proportioning. The front twin piston calipers produced secure stops of 120 feet. Our only gripe is that pedal feel is a bit soft and bottomless.

But, true to its sport sedan lineage, the front strut, rear multilink suspension delivered quick, precise turn ins, with only a hint of understeer and body roll. The light rack and pinion steering provides adequate feedback. As a street performer, the X3 once again says confidence loud and clear. 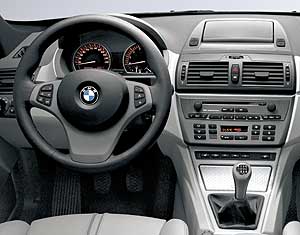 Inside, the word is class, as the cabin is undeniably BMW. Tall, supportive seats feature our performance package’s leather trim and 8-way power adjustments. The driver faces a standard tilting/telescoping leather-wrapped steering wheel with cruise, audio and phone controls. Hidden beneath the hood is the spartan, readable gauge cluster designed purely for purpose. The center stack is topped with an available pop-up Navigation Screen or the standard storage compartment. The NAV system is less susceptible to glare than in the X5. Our X3 3.0i was fitted with a 10-speaker AM/FM CD audio system and automatic climate controls.

Other notable interior gems are the optional Panorama Moonroof, and standard side and curtain airbags, the latter for front and rear seats. With the three-person tight 60-40 split rear seat filled, cargo space is 30 cubic feet. When folded cargo room soars to over 71, surpassing the X5’s offering.

So, is the X3 a fitting update to the X5 legend? We say yes. But it might take more than its big brother’s reputation to convince some customers that the 2004 BMW X3 is pure BMW.

While the X5 is built in BMW’s South Carolina assembly plant, that alone a pox to some BMW purists, the X3 is not built by BMW at all. The X3 is BMW’s first vehicle to emerge from an outsourced production facility in the Austrian town of Graz, namely Magna Steyr Fahrzeugtechnik or MSF. Without plant capacity to produce their new gem quickly, the choice was build or borrow. Building a new plant would seriously delay production, so BMW looked to MSF to make room at their shop to assemble the X3.

EPA fuel economy estimates are 16 city and 23 highway for the automatic. Our X3 3-liter gave up 18 miles per gallon. Not too thirsty, and remember it is an SUV - compact or not.

We love driving the X3. It is a far better combination of all things BMW and all things utility than the X5. But there is a question of whether its subcontracted BMW roots are strong enough. We’ll know soon. But until then, the 2004 BMW X3 Sports Activity Vehicle seems terrific, and a BMW we’d desire, even without a family.