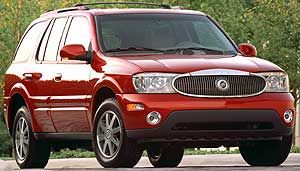 Buick and sport-utility-vehicle usually don’t go together in the same breath. Even the all-wheel drive Rendevous is mostly referred to not as an SUV, but as a crossover vehicle. But the pending retirement of Oldsmobile and its Bravada will leave a hole in GM’s luxury sport-ute line-up. A hole that Buick intends to fill with the new Rainier. But can a brand known for its road warrior sedans build an SUV that lives up to the name of one of America’s toughest peaks?

Well, only time can tell if the 2004 Buick Rainier will make it to the top, but GM has given it the goods to do the job. Besides, what better way for Buick to celebrate its 100th anniversary than to get serious about its place in the growing luxury utility market?

While the crossover Buick Rendezvous is derived from GM’s minivan platform, the Rainier is equipped with the same full frame GMT 360 chassis as the departing Bravada, as well as the Chevrolet TrailBlazer and GMC Envoy. But the look is decidedly family Buick.

Similar to the Rendezvous, Rainier sports a big face waterfall grille and the brand’s classic tri-shield insignia, set off by huge jewel-like headlamp clusters, and standard fog lamps. Broad shoulders and sculpted wheel openings, filled with standard 17-inch 8-spoke alloy wheels, help make up for its short 113-inch wheelbase. The Rainier will not use the extended 129-inch wheelbase available on TrailBlazer and Envoy, and thus gets by with only two rows of seats and a capacity of 5.

The rear fascia reveals a full width rear hatch with separate opening window, ruby-red taillights, and even more Buick badging so you don’t forget who you’re dealing with here. And if you do, let the standard 4.2-liter twin-cam, 24-valve in-line six-cylinder engine be a reminder. The more than adequate six pushes out 275 horsepower and an equal 275 pound feet of torque.

But the Rainier is the only standard wheelbase GM-ute that is also available with the corporate 5.3 liter V-8. With it the Rainier’s power is boosted to 290 horsepower and 325 pound-feet of torque. With that, maximum towing capacity sails from 6,200 pounds to 6,700 pounds. Both choices are linked to a rugged 4-speed automatic transmission.

The Rainier comes standard in two-wheel drive with available on-demand all-wheel drive. Like Bravada it is totally automatic with no low range, but it does include a locking rear differential for tougher going. There’s an independent front suspension, and a solid axle 5-link rear with load-leveling air-springs standard.

Boosting its touring car ride qualities is Buick’s exclusive QuietTuning. This regime combines ultra sound absorbing materials and laminated front and side glass to deflect exterior noise. In fact, back road drives confirmed the lack of groan or hum from tires or tailpipe. And, even though Buick loyalists may find the steering a little heavy, the Rainier manages to bridge the gap between Roadmaster and rock climber without any ragged edges.

Inside, the cabin is quiet and rich, with power adjustable, leather front buckets, dark burled walnut woodgrain on the instrument panel and center console, and a tilt leather-wrapped steering wheel with mounted controls for climate and standard 6-speaker AM/FM/CD stereo. Behind the wheel are sunken, silver-faced gauges and a driver information center. Another useful feature up front is the built-in memo recorder to play back reminders.

The 60/40 split-folding rear-seat is also topped in leather, with available rear climate controls and DVD Entertainment. Cargo space is a fine 29.8 cubic feet with rear passengers, or 80.1 cubic feet with the seats folded down.

But the Rainier does stand up to its competitors in price. For the CXL two-wheel drive, spend $35,945. That’s about a grand more than a comparably-equipped Mercury Mountaineer. But choose the Rainier CXL V-8 All Wheel Drive, and the final tag reads $39,395. That’s about $4,000 less than a similar Lincoln Aviator.

So, by every measure, the newcomer Rainier looks to be an able replacement for the Olds Bravada. And, with that kind of muscle, we figure Buick can drive home their share of the luxury-utility market like a master.