In a world driven by pop-culture and breaking-news, there is one American car company ready to deliver on both fronts. With their jeweled jumbo Escalade SUVs, and beat-Europe-at-their-own-game CTS sport sedan, Cadillac is back and turning heads once again with their boldest entry yet, the 2004 XLR luxury roadster. This sleek drop top combines Cadillac style and luxury with performance car roots. But can this modern icon stand up to its star-studded siblings, and more importantly, will it give its classmates a run for their money?

It will at least have them checking their backs! And why not? The 2004 Cadillac XLR has what it takes to compete. Fully embracing Cadillac’s stealth fighter inspired ‘‘Art & Science’’ styling, and the spirit of the ‘‘Evoq’’ concept that caused such a stir at the 1999 North American International Auto Show in Detroit, the XLR emerges as Cadillac’s first two-seater since the 90’s. But the XLR is no followup to the uninspired front-wheel-drive Allante’. This is a rear-wheel drive roadster with the sharp character of ‘‘youth gone wild,’’ shored up by the same chassis architecture as the forthcoming C6 Chevrolet Corvette.

The XLR has all of the latest Caddy facial features. A strong horizontal bar grill and wide lower air inlet, flanked by creased headlight housings, secure an aggressive front fascia. While pronounced wheel arches, a tall belt line, and flush folding, steeply sloped hard-top reveal both its grace and greatness. The XLR’s deep rear fascia is raised and a bit exposed, reminding everyone of its Corvette chassis performance roots. But that’s well intended since Cadillac’s aim is to establish themselves as a global luxury brand, and that means the XLR must contend with such impressive off-shore rivals as the Mercedes-Benz SL500, Jaguar XK8, and the Lexus SC 430. In fact, the XLR has the widest track, longest wheelbase, lowest height and weighs at least 200 pounds less than its prime competitors.

The interior has standard amenities that are simply plush by any standard. Soft leather, eucalyptus wood and aluminum accents, and Bulgari designed gauges create an incomparable cabin. Convenience technology is a hallmark of this class and the XLR is similar but with less fuss. Proximity keyless access and ignition, heated and cooled seats, head-up display, voice activated telephone, OnStar, and a GPS navigation system that will also playback DVD videos when parked, are all standard. Plus, something often lacking in elegant roadsters, plenty of interior storage. 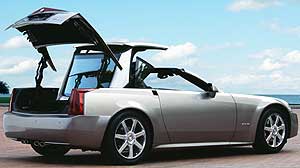 And, to go from coupe to convertible, a single button stores the four-seasons retractable hard top under a hard tonneau cover in under 30 seconds. The top mechanism is sourced from the same firm that supplies the Mercedes-Benz SL, and it works with equal precision. Also like the SL, once down the trunk space shrinks dramatically. From a small 11.6 cubic feet to a minimal 4.4 cubic feet.

But, practicality aside, the XLR is all about open-air play and display. And it shows both on the road and under the hood. No Corvette influence here. The XLR houses the revamped 4.6 liter dual-over-head cam, all-aluminum 32 valve Northstar V8. Now with variable valve timing, it generates 320 horsepower and 310 pound-feet of torque. The V8 is matched with a five-speed rear-mounted automatic transmission, with manual driver shift mode. Standard wheels are 18-inch spun-cast aluminums gripping all-season run-flats.

Set this Caddy loose on the track and the numbers speak graceful speed. 0 to 60 is a pretty quick 6.5 seconds. The 1/4 mile takes only 14.8 seconds, at 97 miles-per-hour. Roughly neck and neck with the SL500. But, while the newcomer delivers smooth power and shifts, the sounds and sensations are not quite as pleasing as the seasoned competition.

Yet, despite its luxury image, the XLR handles like a road champ, owing its prowess to the rigid C6 chassis, Magnetic Ride Control suspension, the best feeling Magnasteer yet, and new generation StabiliTrak electronic stability control. On track the double wishbone suspension, with coils up front and the Corvette’s familiar transverse plastic leaf spring at the rear, delivers sharp, near neutral cornering while the backbone chassis resists body roll and keeps each corner firmly planted.

On road the ride is both smoother and quieter than any Corvette we’ve ever tried, with excellent bump control. There is no body flex to speak of over rough roads, and even with the top down, only an occasional structural tick. The XLR delivered stops from 60 that averaged a short 121 feet. The all-vented discs with four-channel ABS performed expertly and kept the Caddy safe and stable.

And safe is where the XLR falls in price. At $76,200 to start, and the only option being a $325 XM satellite stereo, the XLR’s sticker sits in the middle of its rarefied class, and about 10 grand less than the Mercedes-Benz SL500.

Bottom line, Cadillac’s rookie-roadster may not yet be the class leader, but right out of the gate it proved to us that it can easily trot with the front runners. Moreover, the XLR joins the CTS sedan in showing the Cadillac brand has not only turned the corner, but is turning heads around the globe.