When Enzo Ferrari died in 1988 the automotive world lost a legend. But the passing of its founder has not kept the prancing horse from continuing to produce many of the world’s most coveted sports cars and dominating Formula 1 racing. And it’s the Formula 1 race cars which were always the most important to Mr. Ferrari that inspired the Enzo Ferrari. But can any car be worthy of the Enzo name? Well, only the track will tell.

Enzo Ferrari was much more than just a man who built cars. Once a talented racer himself, he devoted much of his life to the pursuit of automotive glory, building many of history’s most exciting cars, both road and racing. Under his guidance, Ferrari’s prancing horse became a world-wide symbol for automotive excitement, as well as the ultimate symbol that you’ve arrived and are part of a very special and affluent tribe, led by ‘‘il Comendatore’’ himself. So when the people of Ferrari decided to build a car that would bear the name of their late, great founder, they knew that it would have to be the ultimate in performance, technology, and price.

Even sitting in its transporter, the Enzo is an imposing sight. The Enzo’s 6-liter V12 fires quickly in the cool morning air, ripping with the sound of 650 anxious horses and 485 pound-feet of torque. The throttle blips, and slowly the beast emerges from its cage. Unlike ‘‘ordinary’’ Ferraris, the Enzo doesn’t seduce you with its sensual curves or play hard to get with an air of athletic indifference. No, it reaches right out and slaps you in the face with its brazen styling. Its stance dares you to climb aboard, as if saying: ‘‘Come on, let’s go a round or two, if you’re man enough.’‘

The Enzo looks more like a Formula 1 racer than a street car, and for good reason. Much of its stark, simple design is based on the same aerodynamic principles used to build Mr. Schumacher’s championship winning F1 car. The stubby twin canopy nose rakes sharply back to a forward-mounted cockpit. The back end is essentially a giant engine cover, but shaped to manage the flow of air rushing over and under the car. 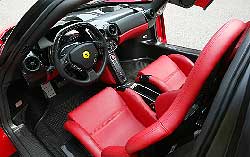 Inside, the cockpit could have been lifted from an F1 car as well. Carbon fiber abounds, and the dash houses only a few essential gauges and heater controls. You won’t find yards of leather, wood and chrome trim here, not even power windows are allowed. After all, when you’re making serious speed, weight is an enemy. Tight carbon fiber, leather covered racing buckets face a steering wheel crammed full of switches for traction control, ride height - you can raise it by 1.4 inches for rougher pavement - and computer functions. A row of LEDs across the top rim serve as rpm shift indicators. Everything works to focus the driver’s eyes where they belong - on the road ahead and the next rapidly approaching corner. In this case, those corners were the 10 familiar turns of our favorite winter playground, Savannah, Georgia’s Roebling Road Raceway.

We approached the Enzo with some trepidation, knowing full well the awesome performance reputation of the car. We expected it to be a double handful to tame on the race track. Well, we couldn’t have been more wrong. Simply put, the Enzo Ferrari is absolutely the easiest to drive high-performance car that we have ever tested. Turn the wheel and there is no coaxing it, and the power steering means no fighting for control. It simply goes where you point it. The Enzo steers with such precision that our drivers were forced to erase their memories of how to drive each corner, or risk turning in too soon and running off the inside edge! 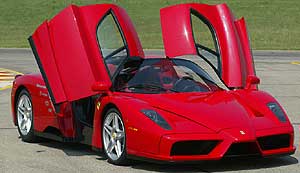 Connecting the Enzo Ferrari to the track are a set of 35-series 19-inch Bridgestone Potenza Scuderia tires 245’s up front and 345’s out back. The suspension setup is a trick arrangement of upper and lower A-arms with horizontally opposed pushrod coil springs and electronically adjustable tube shocks. They keep the Enzo tracking flat and stable even under the most extreme cornering loads.

With all of this amazing technology, the Enzo might lull a driver into complacency, if it weren’t for all of that power catapulting the car from corner to corner. The 6-speed’s paddle shifters produce rapid, smooth shifts, and the speeds this car generates are just as quickly insane. We saw 171 MPH at the end of the half mile straight, a full 10 miles faster than the impressive Ferrari 575M. 0 to 60 is a blink, 3.3 seconds. Lap times were a flat 1 minute, 20 seconds for the two-mile course. That’s 4 seconds quicker than the 575, or about half the length of the straightaway.

Reining that power in are 15-inch carbon-ceramic discs at all four corners. These ABS assisted dinner plates serve up great gobs of anti-lock slow-down power. The brake pedal requires some effort, but feel is excellent and fade is never an issue.

Now, you don’t find $660,000 cars like this sitting in a manufacturer’s press fleet, waiting for the phone to ring. So we have our Private Collections reporter, Ron Spangler, to thank for tracking down an owner willing to let a group of strangers touch his Enzo, much less pound it on the race track. That man’s name is exotic car enthusiast Nelson Cambata, who not only loaned us his car but came along to watch and applauded our efforts at scuffing the tread from his Enzo’s tires. Our brief time in one of only 399 Enzos ended all too quickly, but the memories of this amazing car will not soon fade. Thank you Nelson, and can we say: ‘‘Same time next year?’‘