While Ford has been the king of full-size pickups for over a quarter of a century, they are by no means assured of holding on to that title forever. Along with Chevy, GMC, and Dodge, there are new players, Toyota and Nissan, trying to up the ante for pickup leadership in design if not sales. So, to maintain that untarnished crown, Ford’s best selling F-150 just got a lot better with a complete overhaul. The exterior is tougher, the mechanicals stronger, and the interior both bigger and more inviting. In fact, this is not so much a redesign as an American pickup renaissance.

The 2004 Ford F-150 is truly born again. Style, design, and technology are all 21st century. High praise, to be sure, but obvious from any angle. Adapted from the F-Series Super Duty and Tonka concept, the all-new F-150 has a more forceful, wide-shouldered look that says this is one tough truck. A toughness based on an all-new hydroformed and fully-boxed frame, that’s nine times stiffer than before, and which rides on a coil-over-shock double-wishbone front suspension. Both ride and handling are improved thanks to a long spindle design and the first aluminum lower control arm on a big pickup. At the rear a traditional live axle, but with 3-inch wide SuperDuty leaf springs. The big innovation here are shocks that have been moved from inside to outside the frame, dramatically reducing skating and sliding on rough roads.

Both engines use a new beefed-up 4-speed automatic transmission. No manual is available. Yet, with the 5.4 V-8, the F-150 pulls from 0 to 60 in only 9.9-seconds. The quarter mile takes 17.4 seconds, ending at 81 miles-per-hour. The engine is strong and smooth. But short gear ratios deny you full use of its sprinting power. Punch it at highway speeds, however, and the 5.4 pulls hard through the upper power band.

Hitch up a heavy load, up to 9,500 pounds, and the F-150 also pulls trailers like a champ. So, there’s plenty of grunt, with the gearing well spaced for delivering under load. It’s definitely more work truck than sport truck. But it handles better than any work truck should! Understeer is light, and the long wheelbase tail is well planted. Body roll is plentiful, as expected. While the light, crisp, first time rack-and-pinion steering provides good feedback.

Braking is by 4-wheel discs, with standard ABS and electric brake force distribution. A longish 150 feet was our average stopping distance from 60. Pedal feel and chassis stability were quite good, though there was more nose dive than we’d like. 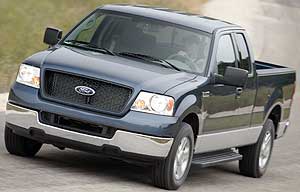 Versatility is increasingly important to all pickup buyers, and the new F-150 meets that challenge with 26 cab and box combinations. That’s 11 more than the best rival. All cabs are also 4-door, as the new F-150 has the first Regular cab with rear access panels. That means usable storage space behind the seat. Plus, both Regular and SuperCabs have also gained 6-inches in length. As before, the SuperCrew comes with 4 car-like doors.

Bed sizes range from a full 8-foot, to 6-foot, to a compact 5-foot box. For the first time the 5-foot box can be ordered on the SuperCab so it will now easily fit into a suburban garage. All boxes are also over 2 inches deeper for up to 20% increase in cargo bulk. Maximum cargo weight is a class best 3,000 pounds. One neat new standard feature is Tailgate Assist. A helper torsion bar spring inside the tailgate reduces the effort needed to open and close the tailgate by half.

The new F-150’s interiors are not just roomier, but far more pleasing with extremely high quality fabrics and trim. There is a different atmosphere for each of the 5-Series: XL, STX, XLT, FX4, and Lariat. Even the gauge clusters change completely between most series. A split bench front seat with center armrest is standard on all models, with broad, very supportive captain’s chairs optional on XLT and up.

The F-150 is also the first big truck available with a sporty console mounted gear shift, and console rear air vents. Center stack audio and climate controls are another major departure from previous Ford trucks. Quite European in style with fewer, larger, nearly flush switches. They work as nice as they look. A modular overhead rail system allows customized storage as well as a rear seat DVD system. Speaking of the rear seat, the longer SuperCab can now accommodate adults back there with far less pinch.

The 2004 Ford F-150 truly is the king of trucks reborn. It’s bigger, tougher, and stronger to be sure, but also smarter and far more sophisticated, and determined to reign over all other pickups for another quarter century.