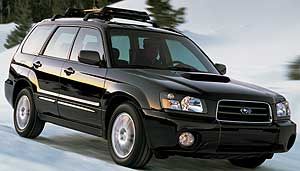 In recent years, Subaru has built a formidable performance reputation, with cars like the Impreza WRX and WRX STi. But it’s practical, all wheel drive, people movers, like the compact Forester SUV, that still make up the majority of Subaru sales. But no one ever said practicality and performance can’t come together. That’s where this new turbocharged Forester 2.5 XT comes in. It’s still a family wagon, but one for a much more active family.

Subaru invigorated their small-ute by tapping into the Impreza WRX STi’s engine technology. But the result is a 2004 Forester 2.5 XT with a brute and brawn all its own. The 2.5 liter, dual-overhead-cam 16-valve flat four engine has been turbocharged, and now pumps out 210 horsepower and 235 pound feet of torque. That’s 45 horses and 69 pound-feet more than the standard model. It pulls around 3,289 pounds of Forester, 80 pounds more than the non-turbo, and still delivers a maximum 2,400 pound towing capacity.

Capable of nearly 130 mph, it’s a real hot-rod among its classmates in the small SUV segment. And like its high performance cousin, the WRX STi delivers impressive pull at all speeds.

It’s even quick from a dead start. The 2.5XT sweeps the 0-60 run in 6.2 seconds. That’s as fast as an Infiniti FX45! And it’s easy getting used to speed in the Forester with its sharp 5- speed manual transmission. A new 4-speed electronic direct controlled automatic transmission is also available. The heavy duty MacPherson strut suspension felt firmer and more stable than that of previous models. Turn in is quick, with minor understeer. It’s a sharper, more nimble feel than we expect from a compact SUV.

Indeed, whether off track, off road or in town, the 2.5 XT is a capable ride. The full-time all-wheel-drive system uses a viscous-coupling center differential with the manual transmission, and a continuously-variable transfer clutch with the automatic. Either way, there’s plenty of traction for all conditions. The only stick-in-the-mud was the manual’s Hill Holder system that kept us from rolling backwards on steep grades, but was reluctant to let go when the time came to go. As for fuel economy, EPA estimates are 18 city and 23 highway. Our test gave up a practical 22 miles per gallon in a mixed driving loop.

Now practical is all very well, but the 2.5 XT designers chose to highlight its newfound performance with a sportier look. Perched on the aluminum-alloy hood is a fully functional scoop that delivers fresh air to the engine-mounted intercooler. Body-color-side cladding, along with 6-spoke, 16-inch alloy wheels and 215/60-Series tires also help distinguish the newest member of the Forester line-up. Even the rear fascia received a boost, with new lights and a chrome tailpipe. The 2.5 XT is as nice looking driving away as it is pulling up to the curb. 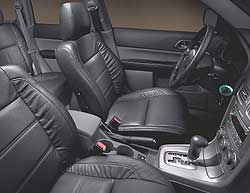 But sporty looks aren’t just for passers by. A step inside the XT cabin, and you’ll see how drivers and passengers are pampered with that same Subaru sleekness. Among the black flat woven upholstery, twin front buckets emerge for comfort. The driver’s side has height and well needed lumbar adjustments. The standard All-Weather package includes heaters for the front seats and side mirrors. The clean, sporty gauge cluster hides deep behind the leather-clad wheel, while the 120- watt AM/FM Weatherband stereo with 6-disc in-dash CD changer highlights the center dash.

Throw in the automatic climate control system and storage friendly side console, and you’ve got quite a fitting cockpit. One with space for three children or two adults in back. The 60/40 split folding rear bench provides ample flexibility for passengers and their gear. The big hatch reveals 32.0 cubic feet of cargo space seats up, and a reasonable 64.1 cubic feet seats down. Roomy, but less than rivals like the Honda CR-V and Toyota RAV-4. But then, while they may have more behind the hatch, they come up way short under the hood. That’s where the Forester 2.5 XT has no class peers.

As for prices, base for the Forester 2.5 XT is $25,520. While nearly two grand more than the non-turbo Forester XS, given the XT’s performance, it’s not out of line. But add the Premium package with leather, sunroof and automatic transmission, and the $28,070 tab starts to make us dizzy.

Yet, whether it’s jumping over small rocks, or making a big leap from stop lights, the 2004 Subaru Forester 2.5 XT is one entertaining little SUV. It’s still a practical family wagon, but for a much more active family than ever before!